“Let there be no doubt about it: We are serious in wanting the EDCA to be junked. We do not want any of its provisions implemented. The Supreme Court should side with the Filipino workers and people on this most important issue.” – KMU

MANILA – A month after the first and second petitions against the Enhanced Defense Cooperation Agreement (EDCA) were filed at the Supreme Court, a third petition was filed Friday (June 27). This time, it was by labor centers of workers and government employees respectively.

Negotiations that resulted in the EDCA began August last year. Sensing that it is a new military basing agreement by another name, civil society groups and opponents of foreign military bases clamored for the release of its contents to the public. 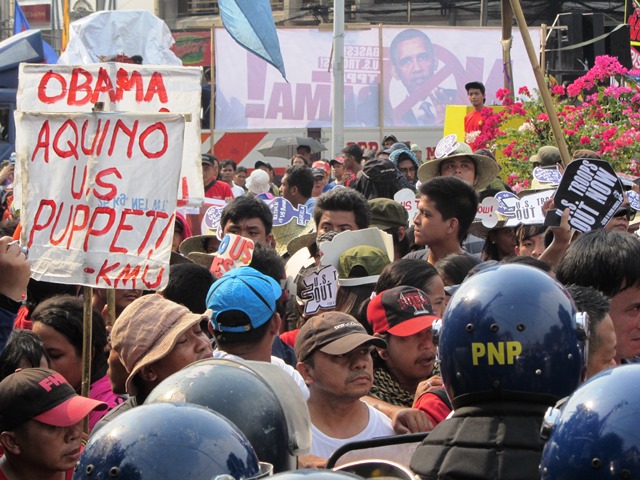 Aside from Ochoa, the labor groups cited as respondents in their petition Defense Sec. Voltaire Gazmin, Foreign Affairs Sec. Albert del Rosario, Armed Forces Chief of Staff Gen. Emmanuel T. Bautista, and Defense Undersecretary Pio Lorenzo Batino, among others. KMU and Courage are seeking to annul the supposed executive agreement entered into by the government of the Philippines and the government of the United States of America on April 28, 2014.

“Let there be no doubt about it: We are serious in wanting the EDCA to be junked. We do not want any of its provisions implemented. The Supreme Court should side with the Filipino workers and people on this most important issue,” said Elmer “Bong” Labog, chairperson of KMU.

The labor centers claim the EDCA violates provisions of the Constitution pertaining to the preferential use of Filipino labor and domestic materials, tax exemptions, national sovereignty, territorial integrity, and national interest, freedom from nuclear weapons, role of the judiciary in settling disputes, autonomy of local government units, and treaties with other countries, specifically military treaties.

Ferdinand Gaite, president of Courage, warned that the “EDCA means the massive deployment of US military troops and weaponry into the country unprecedented since World War II.” He urged all freedom and nation-loving Filipinos to stand up against it, saying that a reoccupation by the US or any other country should not be allowed to happen.

Aside from asking the High Tribunal to nullify the EDCA, KMU and Courage asked it to prevent the Aquino government from implementing any of the agreement’s provisions, and to issue a Temporary Restraining Order against the agreement while the petition is being heard.

Labog likened EDCA to a bomb lobbed into the country’s Constitution. For Gaite, EDCA’s “wholesale violation of the Philippine Constitution emphasizes the fact that the re-occupation of our country by a foreign power is another insult to the Philippines’ so-called independence.”

Joining the KMU and Courage in the petition were the Center for Trade Union and Human Rights and the National Federation of Labor Unions-KMU, one of the oldest and biggest labor federation in the Philippines. The petitioners were assisted by lawyers from the Pro-labor Legal Assistance Center.