‘The continued existence of haciendas and the escalating attacks on farmers here are concrete proofs that after 26 years, the pro-landlord CARP is an epic failure.’ – Rafael Mariano, KMP

MANILA — Farmers under the banner of the Kilusang Magbubukid ng Pilipinas (KMP) called for the ouster of President Benigno Aquino III whom they tagged as “pro-landlord and anti-farmer.”

In a press conference, June 3, peasant leaders announced protest actions in time with the 26th year on June 10 and the expiration on June 30 of the Comprehensive Agrarian Reform Program (CARP).

Dubbed as “March of CARP Victims for Genuine Land Reform,” the protests will culminate in a protest action near Malacañang. Farmers from Southern Tagalog, Central Luzon, Cordillera and Ilocos regions are set to join the protest actions in Manila.

“Thousands of CARP victims will send a strong message to Aquino and the proponents of the CARP extension bill that we have had enough of the lies, deception, and violence inflicted by the sham CARP to the peasantry,” KMP chair Rafael Mariano, also former Anakpawis representative, said.

On May 14, the House committee on agrarian reform approved House Bill 4296, a bill granting two-year extension of the 26 year-old CARP.

Leaders of farmers from Hacienda Luisita, Hacienda Looc and Araneta Estate testified how they continue to suffer from the government’s agrarian reform program.

Florida Sibayan, chairwoman of the Alyansa ng Magbubukid sa Asyenda Luisita (Ambala), said that despite the Supreme Court decision ordering the distribution of land to farmworker-beneficiaries, they continue to be denied of their right to land. 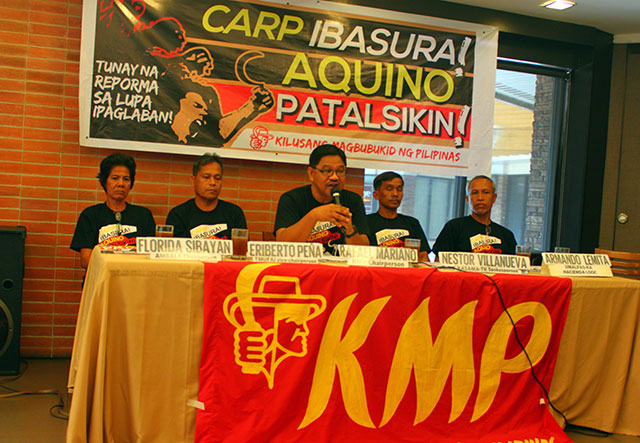 Sibayan said the Department of Agrarian Reform (DAR), in fact, has been the primary instrument of the Cojuangco-Aquinos in grabbing prime agricultural lands in Hacienda Luisita. Corporations owned by the clan of President Aquino, such as the Tarlac Development Corporation (Tadeco) and Central Azucarera de Tarlac (CAT), have claimed ownership of over a thousand hectares of land, destroyed the farm lands and evicted the tillers.

Sibayan said the DAR only gave them photocopies of certificates of land ownership award (CLOA) and nothing more.

Ambala criticized the DAR for denying their petition for a cease and desist order against Tadeco.

Like in Hacienda Luisita, Lemita said the DAR had favored Sy and approved the land use conversion in Hacienda Looc.

Lemita also denounced the harassment of farmers. He himself, his daughter Alyza Mari, and his brother Anatalio, were arrested on April 15 and detained at the Batangas Provincial Jail and Camp Vicente Lim for trumped-up charges. They were released more than a month later, on May 19, after a local court in Batangas dismissed the charges for lack of evidence.

According to the KMP, the DAR ordered in 1998 the coverage of 311 hectares of land under CARP. “The Aranetas opposed the decision, filed a petition for exemption from CARP coverage, and deployed private security guards,” the KMP said.

“Ironically, while the agrarian dispute is still pending at the DAR, the DAR itself issued a conversion order in favor of the Aranetas. Obviously, there is connivance between Roxas’ relatives and the DAR,” Antonio Flores, KMP secretary general, said.

Mariano also cited the case of farmers in Hacienda Dolores who are being prevented entry to their farmlands by the security guards of real estate developers LLL Holdings Inc. and F.L. Properties and Management Corporation.

“The continuing existence and the escalating attacks against farmers in these vast haciendas are concrete proof that after 26 years, the pro-landlord CARP is an epic failure,” Mariano said. “Every CARP victim’s step is an indictment of the sham CARP.”

The peasant leader said the farmers’ march will also highlight the peasantry’s opposition to Aquino’s Charter change, which the farmers view as a “grandiose plan to auction off our lands and give foreigners 100 percent ownership of lands.”

“Charter change and the CARP extension bill are the reasons behind current trends where big landlords further strengthen their control over the land not only on paper but by literally barricading the lands and increasing their private army,” Mariano said citing the “construction of concrete walls by the President’s relatives in Hacienda Luisita, the increasing rights abuses and militarization in Hacienda Looc, the denial of access to land against farmers of Hacienda Dolores, and the illegal surveying of land at the Araneta Estates.”

“The only way to stop the continuing deception, eviction, and killing of farmers is to oust the chief political representative of big landlords,” Mariano said, referring to President Aquino himself. Mariano said the farmers’ upcoming march signals the start of a sustained campaign to oust Aquino.