You Are Here: Home → 2014 → May → 30 → Negros Occidental, still a simmering social volcano as land disputes intensify

For 20 years agrarian reform beneficiaries waited out the snail pace processing of land distribution by the Department of Agrarian Reform only to be told that part of the land that was supposed to be awarded to them was taken by the provincial government while another part is being offered for lease to Dole Philippines.

MANILA — “More than P150 million ($3.423-M) worth of provincial government funds had been spent in the Negros First Ranch project of Governor Alfredo Marañon.”

Farmers and farmworkers revealed in a camp out in front of the provincial government in Bacolod City. The sugar-producing Negros is home to some of the country’s richest hacienderos, including the business tycoon, “kingmaker” and presidential uncle Danding Cojuangco. Two representatives from this province, Alfredo Benitez and Jules Ledesma IV, ranked fourth and fifth in the House of Representatives’ Top 5 richest according to their SALNs.


Yet, Negros Occidental is home to some of the poorest Filipinos, which, in turn, makes the province a known hotbed of insurgency. The province has a bloody history of brutal counter-insurgency operations, including massacres and extra-judicial killings.

Negros Governor Marañon is a second-termer who received last February the Bayanihan Award from the Armed Forces of the Philippines for implementing a “peace program,” which the AFP finds consistent with its counter-insurgency program or “internal peace and security plan.” This week, an ex-rebel turned anti-communist commander of RPA-ABB Joseph Stephen Paduano joined the House of Representatives as first nominee of previously disqualified Abang Lingkod Partylist. Its votes came largely from Negros Occidental.

The land problem in the province continues to fester, as the issue of protesting farmers demonstrate. According to the National Federation of Sugar Workers (NFSW), the provincial government misspent public funds to purchase 5,760 sheep worth P83.42 million ($1.9M), construct a building in the ranch worth P10 million, and pay the land worth P41.2 milion ($940 thousand plus).

But the worst of it, said the NFSW, is that public funds were used to frustrate the land occupation of long-standing farmers over former hacienda lands, of which a part was turned into a ranch of the governor, and another is due to be leased to multinational fruit company Dole Phils. The said lands are supposed to be for distribution via the country’s land reform program (CARP and then CARPER), but for various reasons, which the ARBs (Agrarian Reform Beneficiaries) said they could not understand, the processing of land distribution has moved at a snail’s pace.

The NFSW and ARBs of the disputed hacienda/ranch lands slammed the provincial governor for using public money to defeat land reform.(The provincial governor and veterinarian have been charged with plunder for the alleged overpriced purchase of sheep and cattle before the Office of the Ombudsman last December.) 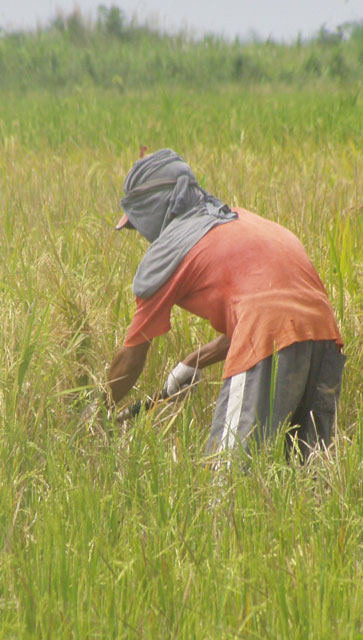 For up to 20 years, farmworkers said, they waited out the lengthy processing of land distribution. In the last three years, the unsettled land issue has become especially contentious, said the NFSW statement.

The lands bought by the provincial government since 2010 include two haciendas, Hacienda Arloc, 55 hectares and Hacienda Ilimnan, 105 hectares, both used to be owned by Arguelles siblings and planted with sugarcane, said John M. Lozande, secretary-general of NFSW.

In 2010, the reason for the slow development in land reform processing came to light as they were told that the provincial government of Negros Occidental had entered into a sale transaction with the landowners, the Arguelles family. The farm workers said a provincial government representative told them the said lands are no longer available for the government’s land reform program as it will be transformed into a “Cattle and Sheep Ranch,” under the Provincial Government Food Security Program.

Aside from the P150-million ($3.423-M) expense for the ranch by the Negros provincial government, it has spent for government tractors used to plow the farms, pay the salaries of personnel employed for this project, purchase fertilizers and seeds given by the provincial government to farmworkers for use in the farm lots, etc, the protesting farmers said.

But only hundreds of these sheep can be seen roaming the 159-hectare ranch, the farmers said. “Where are the 5,760 sheep reportedly bought by government?” they asked.

The Negros First Ranch landholdings (the 50-hectare part that was formerly Hacienda Arloc) had been petitioned for land reform coverage by 26 farm workers and potential beneficiaries in 2000. In 2003, the Department of Agrarian Reform issued a Notice of Coverage. In 2004, the Application to Purchase and Farmers Undertaking (APFU) was signed by the beneficiaries, the NFSW said.

But in 2010, the DAR personnel reportedly told the farm workers that they should just reapply as the property has been sold to the provincial government of Negros Occidental.

Meanwhile, the adjacent 155-hectare Hacienda Ilimnan was applied for CARP coverage in 1993, and an APFU has also already been signed by the farmers in 1998. But only 54 hectares were awarded to beneficiaries, with the remaining hundred hectares said to be subjected for subsequent acquisition. These hundred hectares or so were bought by the provincial government.

“The fact that these landholdings (Hacienda Ilimnan) have been applied for CARP coverage in 1993 – being agricultural land and having been issued a notice of coverage – the long period should have been sufficient time for land distribution. If the DAR Offices here in Negros Occidental sincerely and honestly processed it, these properties should have already been in our hands a long time ago,” the NFSW statement said.

The more than 100-hectare Hacienda Ilimnan plus the Hacienda Arloc were both seized by the provincial government’s First Ranch landholdings, reasoning that it would be used for its food security program.

The “Negros food security program of the government continues to wreak havoc to the lives of land reform beneficiaries in Hacienda Arloc and Hacienda Ilimnan in Brgy Sta. Rosa, Murcia,” said Lozande of NFSW.

Since the latter part of 2010, when the former hacienda owners stopped the planting of sugarcane, its farm workers continued tilling the land to survive. They planted it with corn and root crops instead.

By end of 2012, the farm workers expanded their tilled areas in the formerly Arloc landholdings to signify seriousness of their land claims, “despite the police and the provincial government insisting to stop us.” The farmers said they were able to cultivate more than 30 hectares, planting maize, root crops and assorted vegetables.

But in February 2014, tractors owned by the provincial government came without warning and, with the presence of Philippine Army and police, it plowed through more than 20-hectares of lushly planted areas by the ARBs.

The farmer leader said this was just the latest in “a series of repression” being waged by the provincial government against the hacienda farmer-beneficiaries.

“It’s a robbery in broad daylight!” the hacienda farmers said in a statement.

They also said the village of Sta Rosa in Murcia, Negros Occidental, is now heavily militarized.

“Led by Col. Aying of the 303rd Infantry Brigade, the Army unleashed a deceptive campaign through Julian Chiong of Kasanag Foundation by offering P15,000 for every family in exchange for abandoning their landclaim and relocating outside the Haciendas. A carabao for every family was also promised by Col. Aying. But why promise carabaos and deny lands at the same time? Where would we use the carabaos then?” Lozande quoted the farmers as asking.

“For more than two decades now, we are still waiting in vain while the top executives of the DAR just watched as our rights are being violated. Worst the government spent public funds against land reform, against our families and against our future”, the farmers said in a statement.

While the DAR sits on competing petitions filed in July and August of 2012 by the Negros Provincial Government and ARBs respectively, teams from multinational Dole Phils. began campaigning in villages of Sta. Rosa and Canlandog in Murcia, Negros Occidental last December.


Former Negros governor Rafael Coscolluela, now provincial consultant on investment and promotions, trade and export development, and inter-agency coordination, said on January this year that Dole Phils. is looking for potential areas for its plantations in the province because Mindanao, where the weather used to be ideal for its plantations, has now become the pathway of typhoons.

Coscolluela confirmed that Dole Phils. is eyeing a plantation in Murcia adjacent to the Negros First Ranch. The company already has a pilot banana plantation in Himamaylan City, the former capital of the province. But, Coscolluela noted, according to a Sunstar report, that Dole is having difficulties finding vast lands of 200 to 300 hectares for its banana and pineapple plantations because most of the lands in Negros Occidental are already covered by the Comprehensive Agrarian Reform Program (CARP).

That does not seem to pose a problem to Negros Governor Marañon, who was quoted in the same report as saying some sugar planters are now starting to diversify to other crops, as profits from sugar are expected to go down once tariffs on imported sugar are lowered next year to as low as five percent to zero.

Early last December, the NFSW reported that tractors have started plowing the 101 hectares in Hacienda Ilimnan, apparently to start planting of DOLE-PHIL products.

Farmers told Bulatlat.com that they expect lower earnings from the contract growing being offered by Dole Phils., than if they continue with their vegetable and root crops production.

After farmworkers from 16 haciendas in Murcia staged a 17-day Camp-Out in front of DAR provincial office last January, demanding that the agency finally give the two hacienda lands to ARBs, Marañon told the Negros media that they have not entered leasehold contracts with Dole Phils. or any transnational plantation company.

Farm workers from nearby cities of Bago and Talisay also trooped to the campout to sympathize with fellow farm workers, Lozande of NFSW said. During this 17-day campout, Lozande said the DAR office and the Comprehensive Land Use Planning and Implementation or CLUPI in their province promised them that they would send a team from DAR central office to conduct on-site inspection in the two haciendas.

In March 2014, a third Notice of Coverage (of CARP) was issued by the DAR provincial office, but until now, there has been no progress in the processing of the ARBs’ claims, said Lozande. Thus, the campout in front of Negros Occidental Provincial Capitol.

The NFSW is also keeping tabs on the fact that a month and a week from now, on June 30th, CARPER is set to expire. But “the more than two decades’ wait of farmers in Hacienda Ilimnan and Hacienda Arloc to finally own the land they till is still a dream.” The NFSW now equates these farmers’ dream for a piece of land to “a dream for justice and peace for their families.”