MANILA – When Manila Mayor Joseph “Erap” Ejercito Estrada was the country’s president from 1998 to 2000, his administration supported the violent police and military operations that demolished picketlines, wounded strikers and terminated them from their jobs in companies such as the Manila Hotel and Light Rail Transit. Under his presidency, too, the Visiting Forces Agreement (VFA) was signed, paving the way for “visits” of US troops that have been expanded to 365 days a year stay of “rotating” troops.

Estrada’s treatment of striking workers and signing of the VFA contrasted starkly with known advocacies of the late labor leader Crispin Beltran, or Ka Bel. As do Estrada’s record of having been convicted of plunder (though pardoned by the Arroyo administration) and having more than one wife.


Yet, today, Estrada as Manila mayor, paid homage to Ka Bel on his sixth death anniversary. He offered flowers in front of Ka Bel’s memorial at Plaza Miranda. He looked up for a few seconds in silence to Ka Bel’s memorial as if in a prayer. Then he shook hands with and joined leaders of Kilusang Mayo Uno, Anakpawis Partylist, Kilusang Magbubukid ng Pilipinas and Courage, among others, for a brief program at Plaza Miranda.

“Ka Bel is admirable for he did not take advantage of his position as a labor leader and as congressman – he himself had to fix the roof of his house,” Estrada said in Filipino. He noted how others in similar position have used it to amass money.

Ka Bel died when he fell off the roof of his house while he was fixing it. He was the Anakpawis Representative in Congress at the time. The manner of his death stunned the nation and even friends and allies from labor movements abroad. They said it exemplified his incorruptibility and humility. They admired the fact that Ka Bel kept himself close to the lives and struggles of the simple masses — despite his being in positions which others had used to enrich themselves. 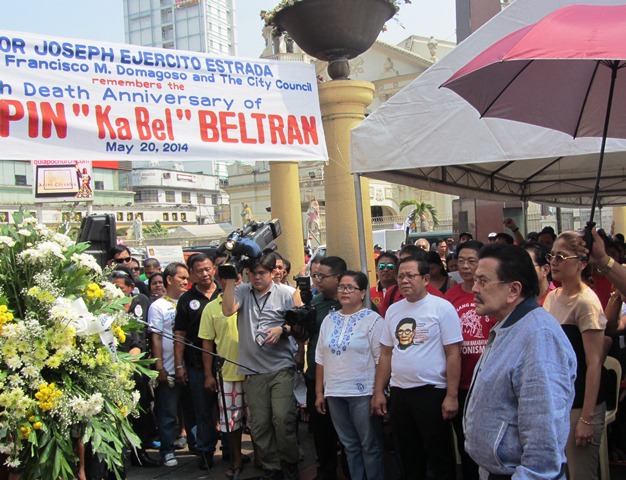 Estrada told the gathered members of progressive organizations, led by KMU, Bagong Alyansang Makabayan and Anakpawis, that he had been lucky to have come to know Ka Bel personally. He said he feels honoured to have been invited at the commemoration of Ka Bel’s death anniversary, as Ka Bel was brave, kind, admirable, valiant, and a good friend to all.

Estrada brought to the gathering a folded letter written to him by Ka Bel in March 2006, five years after he was ousted from the presidency. The letter expressed Ka Bel’s readiness to testify with Estrada against the then president Gloria Macapagal-Arroyo’s treachery and against cases of rebellion she filed against certain personalities.

“I continue to admire his acts for meaningful change,” Estrada said in Filipino.