Since the inception of the Wholesale Electricity Spot Market, there were only five times when the bid offer went up to P62, but this is the first time that a generating company (Therma Mobile or TMO) was able to sell at that high a price.

MANILA – The Supreme Court hearing on the petition against the rate hike being imposed by the country’s largest power distributor Meralco was turned into a forum in defense of the Electric Power Industry Act (EPIRA), which critics blame for the country’s expensive electricity, one of the highest in Asia. Representatives of generating companies, power coops and distribution utilities, and various officials of the Aquino government, came out in full force at the Supreme Court to defend Epira and its components.

Early into the almost six-hour hearing, Assistant Solicitor General Vida G. San Vicente defended EPIRA, the law that paved the way for the privatization and deregulation of the power industry. He said that under this law, “generation and supply companies are regulated by the Energy Regulatory Commission (ERC).” He also defended the situation under EPIRA where power generation and distribution are not regarded as public utilities. Critics say that the government, by not classifying power generation and distribution as public utilities, practically clipped its authority to regulate the industry.

ERC Executive Director Francis San Juan defended one of the most criticized component of electricity charges, which the EPIRA allowed, the AGRA or Automatic Generation Rate Adjustment. He claimed that it is needed “to govern how the allowable generation costs of distribution utilities (DUs) can be recovered.” The AGRA allowed power distributors like Meralco to automatically pass on to consumers the higher costs of power that it buys from power generators. 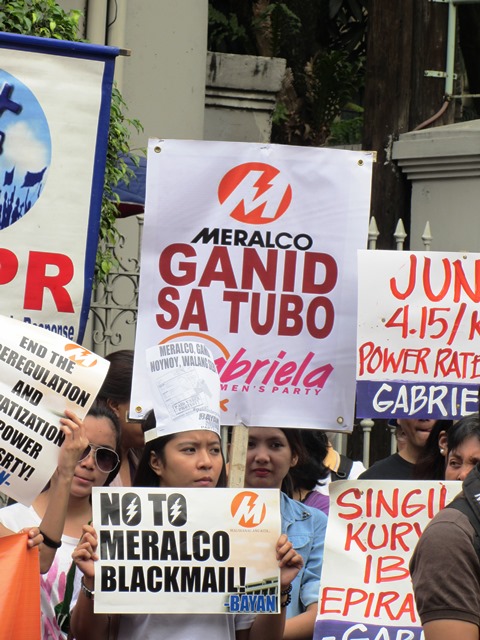 Despite charges that the ERC failed to do its job as regulator when it “hastily” approved Meralco’s rate hike, Executive Director Francis San Juan told the SC that the inclusion of AGRA in electricity charges “did not negate ERC’s regulatory functions.” He also said the ERC “only allowed Meralco to pay its power suppliers.”

Petitioners from Makabayan partylist groups are questioning the suspiciously high costs of power supply that Meralco is charging its customers.

Power distributors buy electricity directly from power generators or through the Wholesale Electricity Spot Market (WESM). Supposedly created to bring down the costs of power supply through open trading between power generators and distributors, as well as big corporate power consumers, the WESM, which was established by virtue of the EPIRA, began commercial operations on June 26, 2006.

During the oral arguments at the Supreme Court last Tuesday, lawyer Criselda S. Martin-Fuñelas, counsel for Philippine Electricity Market Corp. or PEMC, said that as administrator of the Wholesale Electricity Spot Market (WESM), the PEMC “merely computes how much buyers should pay.”

The WESM, Fuñelas explained, is “a venue for sellers and buyers to trade electricity in a transparent manner. It allows a centralized dispatch of all generating capacities.

“The PEMC does not dictate prices at the WESM,” said Fuñelas, adding they use an “algorithm” to determine prices.

Asked to shed light on the role of WESM, an energy lawyer told Bulatlat.com that distribution utilities are mandated to buy 10 percent of their power needs from WESM (but they can buy more). Power distibutors and generators agree on a contract price, which is supposed to function like a hedge to protect the buyers (distribution companies) from potential financial losses resulting from spikes in prices of power.

At the WESM, power generators offer a bid for a stated need, say 50 MW. The energy lawyer told Bulatlat.com that usually, P10 to P11 per kWh is the going price in WESM. The last power producer to make their bid in WESM sets the going price.

Since the inception of WESM, there were only five times when the bid offer went up to P62, but this is the first time that a generating company (Therma Mobile or TMO) was able to sell at that high a price.

“There are suspicions that there had been collusion. Why were other power plants shut down? Have there been actual breakdowns, which required maintenance shutdowns? You have no way of knowing if it’s true,” the energy lawyer said.

At the SC hearing, Roderico Puno, counsel for Therma Mobile, Inc., defended his company saying Meralco’s power supply ageement with them “was evaluated and approved by the ERC.”

However, ERC Director Juan admitted during the hearing that they had not consulted with their staff, who are economists and engineers, regarding the December 5 letter of Meralco (on the rate hike).

Asked also why every cost is passed on to consumers? Juan confirmed what critics have been saying, that “The law provides for recovery of costs, to assure the inflow of capital and to encourage entry of investors.”

For Juan, Meralco could have just automatically increased its rates. Asked by Justice Marvic Leonen why the ERC didn’t find anything strange with the high generation cost, Juan replied that when they issued the December 5 letter, there was (yet) no indication of irregularity.

For critics of EPIRA, the higher rates of electricity that prevailed since EPIRA was signed into law is enough reason for it to be scrapped. However, the Aquino government sees it differently: it will rather tweak it than scrap it.

Asked by Chief Justice Ma. Lourdes Sereno why, eight years after the EPIRA was enacted, no independent market operator (IMO) has yet been constituted, in accordance with Sec. 30 of the EPIRA Law, Energy Sec. Jericho Petilla replied that a study on it has just been completed.

A study pushing for the institution of an IMO has been done by a consultant, Petilla told the SC. However, he said: “We can have independent members in the IMO, but how independent will they be?” he asked.

For Aquino’s energy secretary, the implementation of EPIRA is “a learning process.” He talked of “changes” to be instituted soon. For example, in the light of growing protests, the Energy department decided to lower the cap on bid prices at the WESM.

But many costs would continue to be passed on. When asked about why power distributors are allowed to charge its customers for systems losses, Sec. Petilla said “Systems loss is an inherent part of generation cost. This is unavoidable. We cannot eliminate it.”

Asked by justices if the ERC has withdrawn its decision to approve the rate hike, ERC Chairperson Zenaida Ducut told the SC that yes, they “have modified it in its December 12 letter.”

When asked about the possibility of revising the process in such a way that Meralco will first pay the generation cost and other pass through charges, and then apply for authority to collect it from consumers, Ducut said “We will look into your suggestion, Your Honor.”

Ducut added that they know what to do in computing the generation cost.