Spearheaded by Save Pantukan Movement, protesters marched from Pantukan Public Market to the office of SAGCL, stopping over at the municipal hall to submit their position paper and to seek dialog with the mayor. 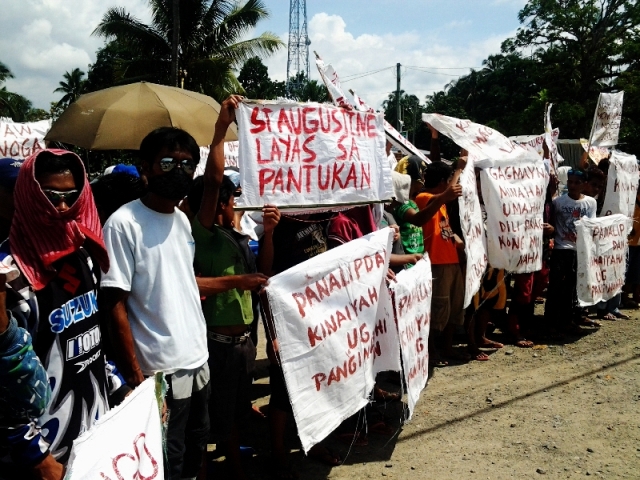 The miners and farmers have staged crippling barricades at the national highway last year to dramatize their opposition against the $2-billion open-pit mining.

For its part, the SAGCL announced in September it would start full-blown operations in 2017 after finding positive results in their feasibility study. The US-based large-scale mining company cited in its feasibility study that the project will produce 100,000 tons per day of copper and gold and a mining rate at an approximate 178,000 tons daily.

Pedro Arnado, Chairman of Kilusang Magbubukid ng Pilipinas – Southern Mindanao Region, said “small scale miners and farmers fear the devastating effects of the SAGCL operations to the environment and to the people’s livelihood in Pantukan.”

In their position paper, the Gagmay’ng Minero sa Pantukan and Hugpong sa mga Mag-uuma sa Walog Kompostela (HUMAWAK) — an alliance of peasants and small-scale miners in Compostela Valley — demanded that the government should implement a “pro-people’s mining policy”, oppose and cease and desist all the large-scale mining operations of SAGCL; and stop the counter-insurgency operations under Oplan Bayanihan by the 71st Infantry Battalion and 28th IB of the Philippine Army. These armies were reportedly backing SAGCL interests in the area.

Protesters were later disappointed after Pantukan Mayor Roberto Yugo refused to heed a dialog with them.

“Please have the position paper received at our records section, and I will answer it in a proper forum. You should have proposed the schedule earlier,” Yugo told the protesters.

In a news report, Yugo said he backs the $2-billion gold and copper project as this would be beneficial for local constituents.

Bellen Galleto, spokesperson of Save Pantukan Movement, told Davao Today that Yugo’s move was “arrogant” and “inappropriate” for a public official.

“We expected him to read our position paper and allow us to ventilate our grievances,” Galleto said.

“We are protesting again because we truly fear that with the impact of natural disasters in our country, the open pit mining operations of SAGCL will ultimately destroy our environment. This is like a Yolanda in our midst,” Galleto said.

She added that “With denuded mountains as a result of large-scale mining, residents in low-lying lands will have to suffer more when great disasters come upon us. ”

Protesters said Pantukan town is already prone to geo-hazards, with a number of landslides in the past having claimed a high number of casualties.

Meanwhile, proponents of the Kingking gold and copper open-pit mine project claimed the project will generate 4,000 to 5,000 jobs with 1,700 direct employment during construction.

Small-scale miner Rogelio Simbajon, however, belied the claim, saying that “once the operation continues, 30,000 miners and their families will be displaced.”

Abelino Gudin, 53, from Diat village, said that the local government of Pantukan should heed their demands.

“If our local government will permit this, it is a downright and deliberate attack to our economic right as small-scale miners. What will happen to our families? We don’t have jobs or other means of livelihood.”

Gudin added that “if we excavate our own mining site, we can earn as much as P10,000 ($229) or even bigger if we will work hard in one day, but if we are mere employees of the company, we would be earning P500 ($11) daily or less, which can barely sustain our needs.”

“Our families can live off just a gram of gold, but if we allow the SAGCL to come to our midst, we would be merely contractual employees, earning very little,” he added.

Juland Suazo, Spokesperson of Panalipdan-Southern Mindanao, said the drilling operation of US-based firm in the mountains of Barangay Kingking in Pantukan town is “proof that the Aquino government has no political will to alleviate the economic conditions of the people struck by typhoons Pablo and Zoraida in Compostela Valley province.”

“SAGCL continues to pose grave threats to the people and to environment. Its operations would worsen the impact of storms and other natural calamities. Our communities would be more vulnerable if we allow large-scale mining operations of SAGCL to take place,” Suazo added.(Mart. D. Sambalud/Reposted by