You Are Here: Home → 2013 → October → 22 → What is keeping the government from abolishing the pork and increasing budget for health services?

What is keeping the government from abolishing the pork and increasing budget for health services?

“The government should stop making alibis and stop using scholars and poor patients to justify the lump sum and discretionary funds like the Disbursement Acceleration Program (DAP). Is cutting the budget for government hospitals now called ‘underspending’ and ‘savings’ generation?” – Alliance of Health Workers

MANILA – Tomasa Katudla, 58, has asthma and has been coming back to the Philippine General Hospital since 1998. She said she has many ailments and has undergone different laboratory tests but the doctors could not determine what is wrong with her. “Now the doctor told me to undergo sputum culture and that is expensive,” she told Bulatlat.com.

Katuldla said that to be able to buy her medicines and undergo the needed laboratory tests, she has to go to the offices of Congressmen and Senators for medical assistance. “But they don’t give enough. I traveled for an hour or so and spent transportation going to their office just to get a measly P1,000 ($23.22) for medical assistance.”

Katudla is one with the people’s clamor to abolish the pork barrel system and re-channel the funds directly to social services like health. That is why even with her condition, Katudla and her neighbors in Parañaque City went to the protest action of health workers, health professionals and community health workers at the Senate on Thursday, Oct. 17, calling for the abolition of the pork barrel system.

The health groups slammed the government for not spending enough on social services while billions of pesos were being misused by corrupt government officials. They called on the Senators to let go of their Priority Development Assistance Funds (PDAF) and put the funds directly to government hospitals, to the salary of the health workers and contractual nurses and the underpaid and overworked doctors.

“Is our call difficult to implement? We only want better health services for the people. Their billions of PDAF would definitely help in improving the deteriorating condition of government hospitals,” said JP Gubaton, president of Jose R. Reyes Memorial Medical Center Employees’ Association (JRRMMCEA).

“Different administrations have come and gone and our call has not changed. Every year we are demanding to the government to increase the budget allocation for the health sector, but up to now, even under a government that promised to take the righteous path, our call has not been heeded,” said Ed Damicog, vice president of Research Institute of Tropical Medicine Employees Union (RITMEA).

“Previous news reports have showed billions of money being misused allegedly by Congressmen and Senators. The lump sum funds under the Office of the President have billions in discretionary funds. But still no budget for the health sector?” said Doctor Julie Caguiat of Network Opposed to Privatization.

Caguiat added, “The government should create a mechanism to re-channel all the kinds of pork barrel funds to social services.”

In its proposed resolution providing for the abolition of the pork barrel and reallocation of the said funds to social services, salary increases and job creation, the Makabayan bloc identified a total P927.14 billion ($21.502 billion) worth of pork barrel and lump sum appropriations from the legislative and executive branch as well as other government agencies.

The $21.502 billion pork barrel funds are from the Congressional PDAF amounting to P25.24 billion ($585 million) plus P921.30 billion ($21.366 billion) from other pork barrel and lump sum funds under the office of the President and other government agencies.

According to the House Resolution No. 298 which was filed last Sept. 16 in Congress these funds must be 1) rechanneled to basic social services, government employees salary hikes, and job creation and 2) itemized for purposes of instituting transparency and accountability. 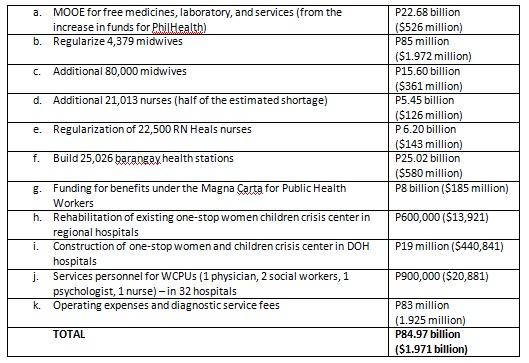 Katudla lamented that during the many years that she has been coming back to the doctor, she has also been going to politicians to ask for medical assistance. But what she gets is not enough. “If the funds are in the government hospitals, maybe it is less difficult for the poor like us. If the funds are in the public hospitals maybe the medicines are for free, the laboratory tests and the cotton and plasters too,” Katudla told Bulatlat.com.

She said that she has no work; her husband do not earn much from selling junk and plastics and her children have their own families too. “With my condition how can I work? As much as I wanted to I cannot help my husband.” That is why, she added, all she could do is to ask help from politicians like the Congressmen, Senators and from Philippine Charity Sweepstakes Office (PCSO) to be able to pay for her medicines and needed laboratory tests.

“The government should stop making alibis and stop using scholars and poor patients to justify the lump sum and discretionary funds like the Disbursement Acceleration Program (DAP). Is cutting the budget for government hospitals now called ‘underspending’ and ‘savings’ generation? Our poor people are sick, but the government is practically denying poor people of life saving medical services by cutting the budget for public hospitals!” Jossel Ebesate, national president of the Alliance of Health Workers said.

Ebesate said in 2011 when DAP was introduced due to “sluggish spending” and with billions of government “savings,” the Aquino government had cut the budget allotment for medicines, supplies, equipment and operations of the 70 Department of Health (DOH)-retained hospitals by 30 percent. The reduction in the budget from P4.36 billion ($101 million) in 2010 to P3.05 billion ($70 million) 2011 is the biggest cut since 2009 said Ebesate.

Ebesate added that the total hospital allotments in 2001 shrank by 13 percent compared to 2010. This has resulted to the increase of rates of laboratory and radiologic procedures in the Philippine Orthopedic Center by as much as 100 percent. The POC suffered an 11-percent cutback in Maintenance and Other Operating Expenses (MOOE) in 2011. The Philippine Heart Center (PHC) and the Philippine Children’s Medical Center (PCMC) also got the biggest budget cuts for subsidies for indigent patients in 2011, 77 percent and 13 percent respectively.

Ebesate said legal or not, DAP was and still is the people’s money which should have been returned to the people through social services like health, education and housing.

“While the people are dying due to the lack of and unaffordable public health services, it is unacceptable that the President can afford to distribute millions to legislators for their ‘pet projects’ and continues to cling on to his pork barrel. This is a betrayal of public trust.”