You Are Here: Home → 2013 → October → 19 → Prosecutor’s dismissal of case against accused soldiers in Capion massacre slammed

“As families and friends commemorate the death of Juvy Capion and her two sons, the decision comes as an insult to the family and to all the victims of human rights violations and also shows the weakness of the Aquino administration to render justice to its aggrieved citizens.” – Bayan Muna Rep. Carlos Zarate

MANILA — A year ago today, Oct. 18, Juvy Capion, wife of Blaan leader and anti-mining activist Daguil Capion, was killed in “a military operation” along with her two sons, Jordan ‘Pop,’ 13, and ‘Jan-Jan,’ 8 in Tampakan, Kimlawis, Davao del Sur. Witnesses said the mother and the two minors were not armed combatants.

The rules of engagement had been violated in the Capion case, Lt. Col. Lyndon Paniza, spokesperson of Armed Forces of the Philippines, admitted in Oct. last year. Evidences showed Capion’s hut in Tampakan had been strafed.

A survivor of what is now dubbed as the Capion massacre, plus the other witnesses such as neighbors who rushed to the victims’ house after hearing the volley of gunfire, said they saw only members of the 27th IB there, “cleaning up the crime scene.”

The 27th IB was later pulled-out from the area while thirteen members of the army were reportedly placed under court martial.

Yet, recently, just few days before the first anniversary of this massacre, a resolution from the Office of the Provincial Prosecutor in Digos City, Davao del Sur, ordered the dismissal of the murder raps filed by Sukim K. Malid against Lt. Col. Noel Alexis Bravo, Lt. Dante Jimenez and fourteen others.

In the resolution submitted by Prosecutor I Jayson Banjal and approved by Provincial Prosecutor Artemio A. Tajon, the evidences filed by the complainants are described as “circumstantial, and insufficient to establish probable cause for murder.”

“This is an injustice!” exclaimed Bayan Muna Representative Carlos Zarate in a statement. Zarate hailed from Mindanao. He expressed support to the rally conducted on the first anniversary of the Capion massacre at the DOJ in Manila. 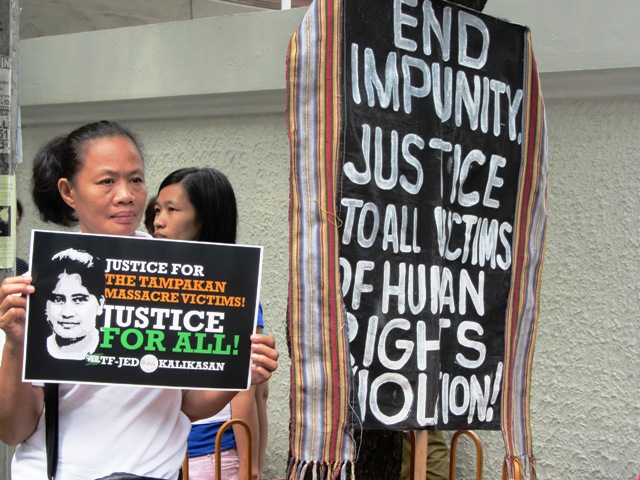 “As families and friends commemorate the death of Juvy Capion and her two sons, the decision comes as an insult to the family and to all the victims of human rights violations and also shows the weakness of the Aquino administration to render justice to its aggrieved citizens,” Rep. Zarate said.

Indigenous peoples’ group Kalipunan ng mga Katutubong Mamamayan ng Pilipinas (KAMP) and other human rights organizations and environmentalists held a protest action at the gates of the Department of Justice. Demanding justice for the killing of the Capion family, they also personally submitted an urgent appeal addressed to Justice Secretary Leila de Lima.

With some of the protesters hooded in red veil, they said the mourning for the Capions will not stop even a year after their violent deaths, as was customary.

“The pain of their deaths inspires the strength to seek justice. In the anniversary of the killing of the Capion family, we are not in grief. We are furious that none of their slaughterers are held accountable for their brutal crime,” said Piya Macliing Malayao, spokeswoman of KAMP. For the dead, they lit a red candle at the DOJ gates.


Describing the court’s ‘resolution’ as “outrageous, Malayao said “it is (also) a huge step backwards for the achievement of justice for their killings.”

KAMP found it incredible that the court just dismissed the statement of the witnesses and the lone survivor as “insufficient and circumstantial.” How can that be? they asked. The soldiers from the 27th IB were the only persons the witnesses saw during the shooting and in the immediate aftermath.

“Who else could have possibly killed the Capion family? ” said Malayao.

KAMP sent a letter of ‘grave concern’ to Justice Secretary Leila de Lima, asking for a reinvestigation of the Capion case. They demanded the dismissal of the prosecutors who dismissed the Capion murder case, and for them to be placed under DOJ scrutiny.


“Attorneys Banjal and Tajon exhibited grave abuse of their authority in the dismissal of this case. To dismiss the case of the Capions is to overlook the string of human rights violations and extrajudicial killings of Blaan people in Tampakan over the years. They display incompetence and incapability of rendering justice for the victims,” Malayao said.

Bayan Muna Rep. Zarate also challenged the Commission on Human Rights and the DOJ to seriously look into the decision on the Capion murder. He appealed for a reversal “for the sake of the Capion family and other victims of human rights violations in mining areas in Mindanao.”

The Capion massacre has been linked to the biggest mining project in the country: the $5.9-billion open-pit gold and copper mining project of mining giant Xstrata-SMI (now Glencore-Xstrata-SMI). Juvy’s husband, Daguil, a Blaan tribal leader, had declared a pangayaw (war for defence of their ancestral domain) after it reportedly became clear to him that the indigenous peoples’ communities would forcibly be removed from their present territories to give way to the huge mining project.

Aside from the Blaan’s defensive stance, communities in other affected areas of the mining project have been opposing it through protest actions, some of which led to local governments passing a resolution to ban open-pit mining.

But President Aquino himself has been supportive of Xstrata-SMI’s mining project, to the point that it reportedly leaned heavily on the Department of Environmental and Natural Resources so it would reverse its initial decision to withhold the mining giant’s ECC (environmental compliance certificate). Aquino has also deployed more soldiers, as well as reactivated paramilitary groups, calling all these troops as “investment defence forces.”

The result: killings in the gold-copper rich area have continued after the Capion massacre, according to KAMP. The recent victim was Datu Anting Freay, 60, and his son, a 16-year old. They were allegedly slain by members of paramilitary group Task Force Kitaco and the 39th IBPA, which replaced the 27th IB.

“The Blaan people are determined to defend their rights to land and self-determination, even if it has been costing them their lives. It is a struggle for future generations, and the patrimony of our country. The murders of the Blaan people are a testament to the Aquino government’s non-recognition of the rights of indigenous peoples, and the improbability of justice under his term,” Malayao claimed.

“The Aquino government’s adherence to the policy of plunder of IP ancestral lands and resources accompanied by a program of repression against our just and legitimate defense of our land and life, is the root of the enduring injustice to indigenous peoples,” said Kakay Tolentino, secretary-general of IP group Katribu. Tolentino said during the protest in front of the DOJ that the Aquino government “has turned it back on the interest of the IPs and favors the investments of large foreign corporations that plunder our land and natural resources.”

The indigenous peoples groups bitterly condemned the Aquino government for using public funds against the people and in defence of huge corporations’ businesses. “The peoples’ money are being used to buy and maintain the guns, cannons and bullets which state troops use to kill and repress the people,” KAMP said in a statement.