MANILA — National labor center Kilusang Mayo Uno condemned today June 24 the arrest of the president of the Metro Manila chapter of one of its federations during another clash this morning of workers and police forces in front of Pentagon Steel Corporation in Barangay Apolonio Samson, Quezon City.

Camilo Cuares, president of the Alliance of Nationalist and Genuine Labor Organizations (ANGLO)-Metro Manila, was arrested after workers resisted the entry of more than 50 “scabs” into the company’s premises.

??Pentagon workers have established a picketline since April 13 this year in protest of the illegal retrenchment of 150 workers. Pentagon reportedly resorted to this after the workers opposed its attempts to force them to sign a waiver prohibiting them from holding protests. 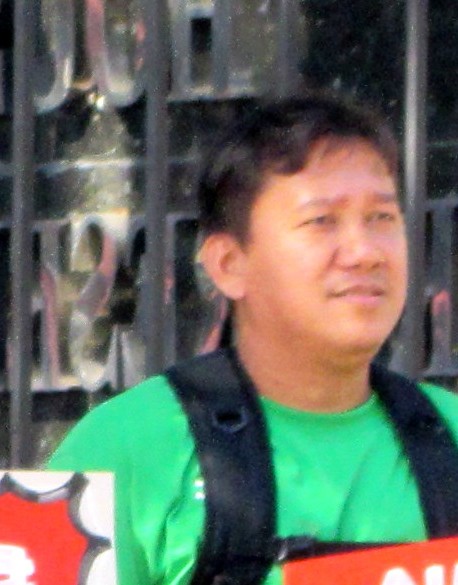 The picketline had experienced harassment from the police on its first week, but it grew more frequent after the National Labor Relations Commission issued a 60-day temporary injunction order against the picketline last May 31.

The KMU has documented that almost daily, there has been a skirmish between the workers and their supporters on the one hand and hired goons and the Philippine National Police on the other.

“We condemn the illegal arrest of our federation leader as well as the intensifying violence being inflicted on the workers of Pentagon Steel Corporation. It is revolting to see how the Pentagon management, led by Mariano Chan, continues to repress workers and enjoy the government’s support,” said Elmer “Bong” Labog, KMU chairperson.??

ANGLO president Henry Huecas said the plight of the Pentagon workers clearly illustrates how capitalists react when workers decide to stand up for their rights. Worse, he said, it also showed how the Aquino government supports capitalists and not the workers. “The Pentagon workers’ struggle is a struggle of the Filipino working class,” said Huecas.

He added that the workers of Pentagon deserve the workers’ support. “They are fighting a brutal capitalist in the person of Chan, an anti-union Human Resources head in the person of Pablito Alcover, and an anti-worker government headed by Noynoy Aquino,” Huecas said.

The labor leaders called on the Filipino workers and other sectors of society to show support for the workers of the nail and iron rod factory.