Women-led watchdog calls for vigilance during May 13 polls

“The irregularities monitored during the final testing and sealing of the PCOS machines and the lack of a source code review by local groups before the actual conduct of the elections put the credibility of Monday’s elections under a cloud of doubt.” – Gabriela Women’s Party Rep. Luz Ilagan

The group said the problems identified during the 2010 elections, the first automated election in the Philippines, still remain. The group fears that the same problems will be repeated this May 13 midterm elections.

During the May 6 final testing and sealing of precinct count optical scan (PCOS) machines in different polling precincts, several glitches were noted by KontraDaya. These glitches are similar to what has been observed during the 2010 national elections.

“These failures and errors which were pointed out during the 2010 experience still exist. PCOS machines encountering problems in reading the ballots cannot be claimed as minor errors. If the machines failed to read the ballots properly, how can we be assured that the 2013 election results would be credible?” said Mary Joan Guan, spokeswoman of Babae! Network and executive director of Center for Women’s Resources (CWR).

May 6 final testing and sealing

Several problems were reported to Kontra Daya during the May 6 final testing and sealing of PCOS machines. This, despite Comelec chairman Sixto Brillantes’ statement that all problems identified during the 2010 elections were resolved and addressed. 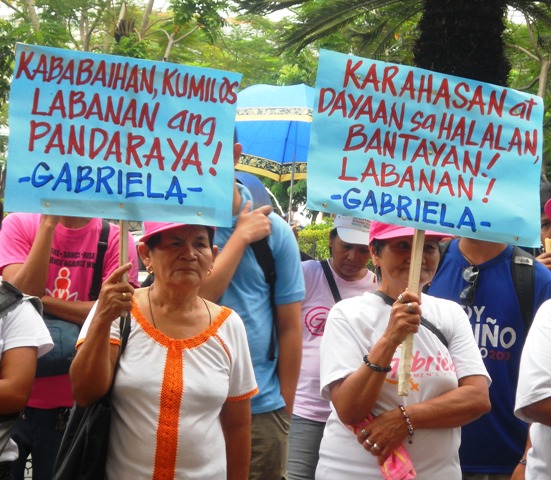 Women stage a picket in front of the Comelec office calling for vigilance in the upcoming elections.(Photo by Anne Marxze D. Umil/ bulatlat.com)

There were PCOS machines that broke down; the PIN entered by Board of Election Inspectors (BEI) was rejected; PCOS machines could not identify memory cards; PCOS machines rejecting a number of ballots and over-voting. These are just some of the problems that occurred during the testing.

Kontra Daya also reported that PCOS machines automatically shut down twice at the DiosdadoMacapagal Elementary School in Quezon City. “The machine also counted wrongly-shaded ballots as well as ballots with over-voting. The back-up memory card of the machine had no serial number.”

The lack of orientation and training of the BEIs was also observed. For example, at the Diosdado Macapagal Elementary School, several BEI members did not have a manual or guide for the final testing and sealing. Also, teachers at the Calinan Central Elementary School said the original third member of their BEI was suddenly replaced by the Comelecwithout prior notice. “The BEI members expressed concern if the last minute replacement underwent proper training.” Kontra Daya also questioned if what the Comelec did is allowed by law.

Materials were lacking and a power outage was reported at the
Canizares National High School and Taragona in Davao Oriental that resulted in testing delays. Military and police presence was also reported at the polling precincts. In Banganga, Davao Oriental, soldiers were seen inside the voting center.

Meanwhile, a progressive youth group expressed alarm over reports of glitches during the May 6 final testing and sealing.

“The level of negligence and incompetence by the Comelec is beyond belief. This can no longer be dismissed as human error. We believe this is part of a deliberate nationwide scheme to rig the 2013 elections for a 12-0 win by President Aquino’s candidates” said Vencer Crisostomo, national chairman of Anakbayan. 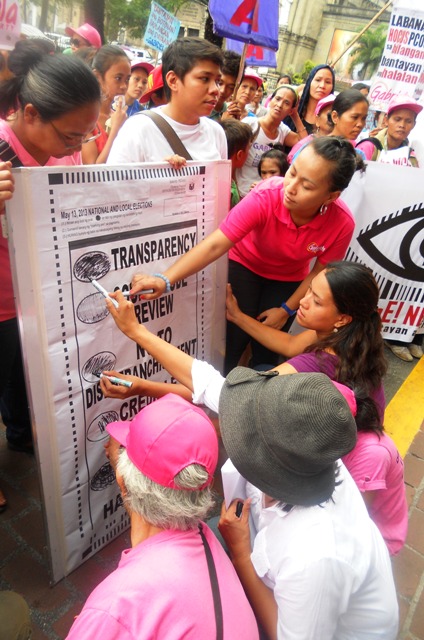 Guan also said the Comelec cannot dismiss the errors as simply one error. She said one error plus 99 more errors results to 100 errors.
“Small errors when put together become huge,” she said in a picket rally in front of the Comelec on May 7. She added that small errors are unacceptable because the funds that Comelec paid for the procurement of 82,000 PCOS machines – the money that the government paid the Smartmatic amounting to P1.8 billion ($44 million) – came from the national coffers. These funds could have bought chairs for public schools, more beds for the government public hospitals or could have been allotted for increases in the salary of teachers,” Guan added.

The group questioned President Benigno S. Aquino III’s silence over the incompetence and lack of preparations of Comelec and the not well-studied automated election system. “We are calling President Aquino to compel the Comelec to fix these problems that may endanger the 2013 elections, instead of the president devoting his time campaigning for his senatorial candidates. We would like to remind him that as a President, he should be non-partisan. He should be doing his job as president and not as a campaign manager,” Guan urged.

Guan added that Aquino’s silence over the reported problems of the system raises suspicions that the May 13 elections might be tainted by fraud. “If all Team Pnoy senatorial candidates win this election, the more he can push for his anti-people policies such as PPP; foreign mining companies can freely exploit our resources; life would be more difficult as mothers will have to make do with the already insufficient income of the family,” Guan said.

Crisostomo said no one but Aquino would benefit from what he dubbed as the ‘AEF’ or ‘Automated Election Fraud.’“Why does Brillantes keep denying these problems? Is he simply being lazy? Is he in denial? Delusional? Or is it part of Aquino’s plan to use deliberately defective PCOS machines, and a deliberately faulty AES?”

“We must remember that the last time the numbers ‘12’ and ‘0’ were mentioned, it was during the previous Gloria Macapagal-Arroyo administration in 2007 with her ‘election magic’ in the province of Maguindanao. The next time it was mentioned was several months ago, by Team Pnoy manager Franklin Drilon. Is there a connection between the AEF and the 12-0 proclamation? We believe there is,” he added.

The group calls for vigilance in the coming May 13 elections amid the said glitches.

“The irregularities monitored during the final testing and sealing of the PCOS machines and the lack of a source code review by local groups before the actual conduct of the elections put the credibility of Monday’s elections under a cloud of doubt. Dominions’ consent to finally release the source code came too late and does little to appease voters’ and watchdogs’ apprehensions,” said Gabriela Women’s Party Rep. Luz Ilagan.

Babae! Network is calling on women in particular, and the public in general, to remain vigilant and closely monitor the May 2013 elections to ensure that their votes will be counted.

The group also vowed to guard their votes not only on election day on May 13 but also through the tallying and canvassing of votes.
Out of 56 (as of 2010 elections) partylist representatives that were given seats in the House of Representatives, only two represented the women sector under the Gabriela Women’s Party. As it is, Guan said, women’s voice in elective positions is very negligible.

“With the ongoing problems surrounding the AES, women are worried that the results would not be credible and their chosen leaders will not be given a chance. As interested stakeholders of the electoral process, women will surely rise up with the rest of the people if and when fraud happens,” Guan said.