Cordillera Day in Baguio focuses on politics of change

BAGUIO CITY — Progressive people’s organizations and individuals under the banner of the Cordillera Peoples Alliance (CPA) led thousands of delegates in reaffirming the Cordillera people’s resolve to continue the struggle in the defense of the ancestral lands and the right to self-determination.

The celebration of the 29th Cordillera Day held at the People’s Park of Baguio were attended by delegates from Benguet, National Capital Region, Palawan and Mindanao and even from different countries. With the theme “Assert Our Right to Self Determination and the Politics of Change,” the delegates vowed to participate in the Cordillera people’s movement for genuine and lasting change.

In her opening remarks, CPA secretary general Abigail Anongos shared the history of the Cordillera Day. She narrated how Cordillera pangats (elders) led their respective tribes in protecting their ancestral lands against the development aggressions being committed against them by big businesses and the government.

She said that 32 years ago, Kalinga elder Dulag Macliing of Butbut Tribe was killed by troopers of the Philippine Army’s 4th division led by Lt. Leotgardo Adalem in front of his house in Bugnay, Tinglayan in Kalinga province. Macliing was in the forefront of the struggle of the Kalinga people and Bontoc of Mountain Province against the Chico River Basin Hydroelectric Dam Project during the time of President Ferdinand Marcos in the 70’s and early 80’s until his death. The project was supposed to be funded by the World Bank and was to be implemented by the National Power Corporation (NPC). The construction of the dam would cause the displacement of around 100,00 of Kalingas and Bontocs living along both sides of the Chico River

“The death of Macliing did not soften the opposition of the people to the project rather it intensified the struggle of the Cordillera people in the protection of their lands,” Anongos added.

Anongos said that a year after the death of the Kalinga leader, Kalinga-Bontoc Peace Pact Holders held the first Macliing memorial. Since then she said, the death of Macli-ing was commemorated annually. She added that in the year 1985, it was resolved that April 24 of every year will be celebrated as Cordillera Day in honor of all martyrs who fought for the indigenous peoples of the Cordillera region. 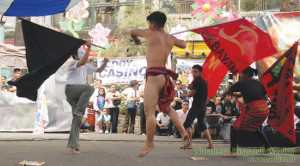 The struggle to defend their land, life and resources from development aggression with the youth taking on the challenge to pick up where their martyrs have fallen. (Photo by Photo by Noel Godinez / nordis.net)

According to Anongos, the people of the region like in other parts of the country are suffering from worsening economic crisis. She said that the Conditional Cash Transfer Program (CCT) solution of President Benigno Aquino III only “teaches the Filipino poor to be dependent on dole-outs and not really helping to dig deeper into the cause of hunger.”

She also mentioned the continuing heavy militarization of Cordillera villages resulted in human rights abuses. She said that in the guise of the Armed Forces of the Philippines’ (AFP) anti-insurgency campaign dubbed as Oplan Bayanihan, Cordillera communities especially those lying within the areas being eyed for mining operations and expansions and other projects are dotted with military detachments.

Anongos said that the Cordillera people suffers from government neglect. She criticized government officials in the region for being deaf to the needs of their constituents.

She said that the Cordillera people can do big things about their plight. According to her, the people should make their vote count this May 2013 elections. She said that the old should be out and the new politics of change should be upheld.

She said that leaders who are responsible, honest and responsive leaders should be elected in office as well as party list groups genuinely representing the people in the government.

In the latter part of the program, different groups, organizations with the foreign delegation and individuals expressed their solidarity through presentations and messages.

The holding of Cordillera Day in Baguio is one of the decentralized celebrations in the six provinces of the Cordillera Region. The Cordillera Day commemoration is also held in Hong Kong and other countries. Northern Dispatch