“Mr. PNP Chief, it appears that you don’t know what you’re talking about. The police should investigate the case thoroughly as ordered by the Supreme Court. it is the responsibility of the police to gather evdiences for someone to be prosecuted.” – JL Burgos, brother of missing activist Jonas

MANILA – The Philippine National Police (PNP), through its chief, Director General Alan Purisima, was quick to dismiss the new evidence filed by the family of missing activist Jonas Burgos.

In a report by Interaksyon, Purisima said there is no enough evidence to implicate anyone in the enforced disappearance of Jonas.

“We do not have records of anything. Those are just reports. May statements na ganito, na ganu’n, we do not have that. Kailangan natin ‘yung tunay na imbestigasyon, dalhin natin sa kapulisan, execute ka ng affidavit (We need a genuine investigation, let us bring it to the police, execute an affidavit)” Purisima was quoted as saying in the report.

In a post on Facebook, JL enumerated how the family attempted several times to get assistance from the police since Jonas went missing on April 28, 2007. In almost six years of searching, the Burgos family encountered attempts by the police and the military to cover up and mislead the case.

When the family knew that Jonas was missing, JL immediately filed a blotter with the police.

The Burgos family went ahead of the police to the site of the incident. The family was able to get the plate number of the vehicle that was used by the abductors, which is TAB 194. The said plate number was later traced to a camp of the 56th Infantry Battalion of the Philippine Army. 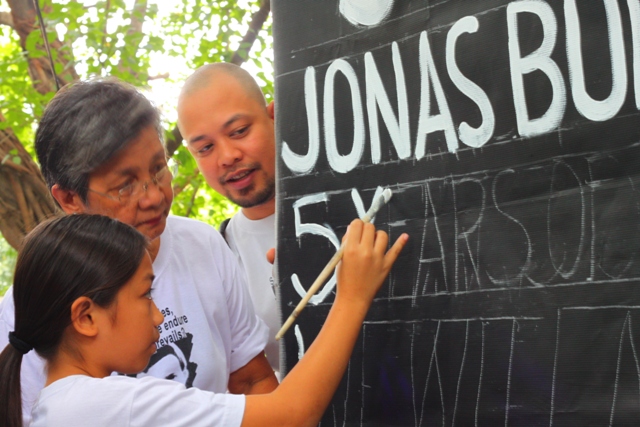 Members of the Burgos family call on the military to surface Jonas during the fifth year of the disappearance of the activist.(File photo / bulatlat.com)

Instead of pursuing the angle that the military, particularly the 56th IBPA, might have a hand in the abduction, the police recommended the filing of charges against the witnesses – a security guard and a waitress — for allegedly “not cooperating” with the authorities.

During one of the hearings at the Court of Appeals (CA) on the writ of amparo petition filed by the Burgos family, Senior Supt. Joel Napoleon Coronel, former regional director of the National Capital Region (NCR) Criminal Investigation and Detection Group (CIDG), admitted that the they have not included the military as suspect.

Moreover, the police did not pursue identifying other suspects. According to one of the memoranda issued by NCR CIDG on the case of Jonas in 2007, the Quezon City Police District made seven sketches of suspects based on the descriptions of witnesses. Only two – one male and a female – however, were attached to the documents submitted by authorities to the courts. When asked about this during the CA hearing in October 2011, Coronel said the other five were not subscribed to by the witnesses and he never had the chance to see the sketches.

Coronel, however, said they asked for a roster of the 56th IB but the Army refused, citing security reasons. “Had the Army given us the roster, we would be able to see the photographs and show them to the witnesses,” Coronel said.

The PNP-CIDG stopped there and went on to pursue another angle that, for the Burgos family and their supporters, is incredible.

The PNP found three witnesses and presented them to the media; all claimed that Jonas was abducted by New People’s Army (NPA) guerillas. The witnesses were Emerito Lipio, Marlon Manuel and Melissa Reyes.

A previous Bulatlat.com story reveals that Lipio, a leader of Pinag-isang Samahan ng mga Tsuper at Operators Nationwide] in Bulacan was arrested and tortured by elements of the 7th Infantry Division of the Philippine Army in July 2006.

Manuel, on the other hand, was arrested by the 56IB of 7th ID of the Philippine Army in December 2006, according to JL.

Reyes, meanwhile, is a rebel returnee who was supposed to meet Jonas on that same day the latter was abducted.

“Her [Melissa’s] aunt from Bulacan went to Karapatan on the same day I was reporting to the human rights organization that Jonas has been missing. Reyes’s aunt also went to Karapatan to report that Melissa was also missing. But after a week the aunt said Melissa came back home without explanation,” JL said.

“Where are these people now? Sources told us that the three are now enlisted personnel of the Philippine Army,” JL said.

The PNP-CIDG failed to produce the said witnesses in the CA hearings.

In July 2008, the CIDG filed charges against a certain Delfin de Guzman and several other alleged NPA members in Bulacan for the abduction of Jonas. The case was eventually dismissed by the Department of Justice, citing judicial courtesy. At the time, Mrs. Edita Burgos filed the writ of amparo petition.

After the Commission on Human Rights (CHR) released its report implicating Army Maj. Harry Baliga Jr., the police still did not investigate Baliaga or any of the Army personnel previously assigned with the 56th IBPA or 7th ID.

In June 2010, the Supreme Court, in a 16-page resolution, concluded that the PNP and the Armed Forces of the Philippines have so far failed to conduct an exhaustive and meaningful investigation into the disappearance of Jonas. The high court then ordered both agencies to conduct a thorough investigation.

However, during a hearing at the CA in November 2011, Gen. Samuel Pagdilao, director of PNP-CIDG, could not provide a categorical answer about what they did after the CHR implicated Baliaga.

When asked by lawyer Ricardo Fernandez, counsel of Mrs. Burgos, what the CIDG did with Baliaga, Pagdilao said: “We have to receive a directive from the CHR.” He added that the Supreme Court mandated his office to provide direct investigative assistance to the CHR.

Asked what the CIDG did with the CHR report, the CIDG chief replied: “I will refer that to the investigators.” He said he assumed the post in April 2011 and that he needed to be enlightened about what transpired.

Following the CHR report, the SC, in a notice dated Sept. 6, 2011, directed the PNP to file comment on the report. There was no mention of Baliaga in that comment.

“It’s a general comment. With due respect to the CHR report, we are standing by our earlier investigation,” Pagdilao said during the CA hearing in November 2011.

When asked, however, what happened to Delfin de Guzman, the police’s suspect, Pagdilao could not provide answers.

During the same hearing, Fernandez asked if the CIDG had investigated Delfin de Guzman. Pagdilao again said he has to refer to the records of the CIDG.

Fernandez asked the CIDG chief if he knew that a certain Delfin de Guzman testified before the same court sometime in September or October. “I was not aware of that,” Pagdilao said.

In the recent ruling, the CA declared the PNP accountable for the conduct of exhaustive investigation on the disappearance of Jonas. Once again, the PNP-CIDG is directed to exercise “extraordinary diligence to identify and locate the abductors of Jonas.”

However, the PNP chief’s recent statement is already frustrating for the Burgos family.

“Mr. PNP Chief, it appears that you don’t know what you’re talking about. The POLICE SHOULD INVESTIGATE THE CASE THOROUGHLY as ordered by the Supreme Court. IT IS THE RESPONSIBILITY OF THE POLICE TO GATHER EVDIENCES for someone to be prosecuted,” JL said in his post.

According to an Interaksyon.com report, De Lima ordered the NBI to form a special team “to conduct a thorough and independent evaluation of all available information and evidence thus far gathered by various offices, including CHR, AFP and PNP” and to “pursue other possible leads, collect further evidence and take all other necessary steps towards the end of ferreting out the truth about the disappearance of Jonas Burgos, and determining who may be criminally charged under existing laws.”

Will the NBI start from the findings and conclusions of the Court of Appeals implicating the military in the enforced disappearance of Jonas Burgos or will it again pursue a different track? Will it, like the PNP, summarily dismiss the decision of the appellate court, which was already based on a thorough evaluation of testimonies and evidence?

In reaction to the President’s order, JL said: “We welcome all the help we can get in finding Jonas. As a commander in chief, we believe that the president can stop the culture of impunity by prosecuting the human rights violators.”

JL said that from the beginning, the family has always been told by various government agencies that full cooperation will be provided to them. “But, as the case progressed the “full cooperation” has gone the other way,” he said.

“We are wary, yet we are hopeful in finding true justice. And as Mrs. B has always been saying the true measure of success is finding Jonas and bring the perpetrators to justice,” he said.