“No money, no service” is how the Anakpawis Partylist described the effects of “Aquino’s rotten policy when it comes to the people’s right to social services.”

MANILA – As Filipinos get ready for Holy Week, the peoples’ protest held the week before it also featured some references to Biblical characters, such as Judas Iscariote and Pontius Pilate. March 20 was dubbed as the Filipino peoples’ day of protests against the ill effects of the Aquino government’s policies. These effects are led by unmitigated hikes in prices and rates of basic goods and services – from oil prices to service rates in public hospitals, water and electricity, toll fees, tuition fees, LRT and MRT train fares, etc. The protesters also decried Aquino’s privatization drive, saying this is also leading to more profit-induced price hikes.

Protest actions leading to March 20 were highlighted by student protests, as they walked out of their schools in Metro Manila and in other regions to protest the budget cuts that have been forcing state universities and colleges to implement various forms of hikes in tuition and other fees. Workers marched to Mendiola Bridge to denounce the Aquino government as responsible for the death of UP freshman Kristel Tejada.

The young student’s suicide was attributed to her family’s failure to support her schooling in UP. Before committing suicide, Kristel Tejada reportedly filed a forced leave of absence to comply with the university’s no late payment policy. This would not have been necessary, the protesters said, if there was no 300 percent tuition fee hike in UP, which resulted from budget cuts imposed by the government in line with its thrust to remove subsidies to tertiary education. While the tuition hike was imposed during the previous Arroyo administration, the current Aquino government is faithfully implementing the very same budget cuts. Kristel Tejada’s parent’s lack of decent-paying jobs, according to the protesters, could be traced to the failure of Aquino government’s foreign investment-dependent cheap labor policy. 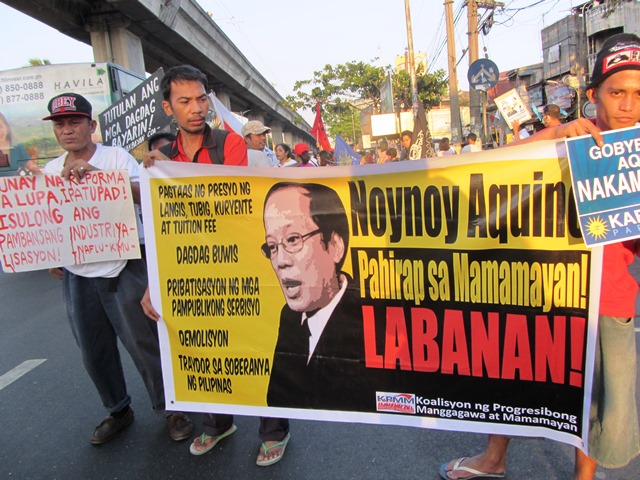 Workers and students in a protest center at Sta. Mesa, Manila (Photo by Marya Salamat / bulatlat.com)

On March 20, various groups from workers, drivers, families of OFWs, urban poor, youth and students and health professionals combined to form about 50 protest centers in Metro Manila and in some cities in regions outside the capital. Drivers and operators led by Pagkakaisa ng mga Tsuper at Opereytor Nationwide (PISTON) started the day early with a mass-up at Quezon Memorial Circle, and a protest caravan to the Department of Energy.

Piston urged Filipino motorists to be vigilant and take action on the possibility that the oil companies would once again take advantage of the coming Holy Week to impose oil price hikes.

Citing the price increases implemented by the Big 3 oil companies shortly before Holy Week last year, as well as the price hikes last Christmas and New Year, the progressive labor center Kilusang Mayo Uno (KMU) described the oil companies as “greedy to the bone and are like Judas to the public.”

“They may be implementing rollbacks now but they will strike with a price hike when it would be most beneficial to them. The problem lies with the Aquino government which, by upholding the Oil Deregulation Law, is allowing them to increase prices at will,” said Roger Soluta, KMU secretary-general.

“Instead of implementing a big-time rollback, the oil companies have actually increased prices since the start of the year. They have further increased the overpricing in petroleum products in order to further boost their already huge profits,” Soluta said.

From January to March this year, the price of gasoline rose five times, amounting to a total of P 4.50 ($0.11). It rolled back five times as well, but equivalent to only P 2.25 ($0.05). “This means that for every liter of gasoline, the oil cartel earned P 2.25 ($0.05) and the people gained nothing but more suffering,” said Sheena Duazo, spokesperson of Bayan – Southern Mindanao Region.
Based on their statements, the KMU, Piston and Bayan are not contented with the oil companies’ incremental rollbacks this year. They are demanding a big-time rollback that must be implemented now.

In Southern Mindanao, Aquino was branded as “the Pontious Pilate of the Filipino masses as he simply washes his hands off the government responsibility to stop the exploitation of the oil cartel – Shell, Petron and Chevron.”

Progressive groups led by Bagong Alyansang Makabayan (Bayan) in Southern Mindanao picketed the office of the Department of Energy in Davao City on March 20 to protest the Aquino government’s “insensitivity amid incessant price hikes.” Duazo of Bayan-SMR said Aquino is the one to blame why Filipinos have to live in daily Lent, carrying the cross of poverty.

On March 20, simultaneous protest actions were held in Metro Manila and other cities. Aside from the caravan to the Department of Energy, health workers and professionals marched from various public hospitals up to the Philippine Orthopedic Center to protest the Aquino government’s lined-up public-private partnerships (PPP) including select public hospitals. PPP is one form of privatizing the operation of the public hospitals, further making the cost of health care and service more expensive, the health workers said.

At the same time, in Manila, members of Anakpawis Partylist marched to the Department of Health (DOH) to pelt its gates with rotten tomatoes, “for Aquino’s rotten social service policy,” they said.

“We are already poor, but still you oppress us!” their placards and speeches said. The group took part in March 20 “Protestang Bayan,” by protesting in front of the office of the DOH in Sta. Cruz, Manila to condemn the looming privatization of public hospitals.

“This government is already killing us with ever-worsening poverty and hunger caused by Aquino’s inaction over unabated hikes in the prices of petroleum products and in the rates of electricity and water. Aquino wants to add to factors killing us by depriving us of our basic right to accessible health care,” Joel Maglunsod, Anakpawis Executive Vice President, said.

Protestors threw rotten tomatoes at the DOH seal to show indignation over the Aquino administration’s policy, which, they said is tantamount to abandoning its responsibility of providing basic social services in order to favor private profits.

Aquino’s boasted ‘good’ economics: no money, no right to services

No money, no right to services also summarized for the youth the tragedy that befall their fellow student, Kristel Tejada, this week.