You Are Here: Home → 2013 → March → 14 → Groups urge Aquino to investigate crackdown on Filipinos in Sabah

Groups urge Aquino to investigate crackdown on Filipinos in Sabah

‘It is not enough for the Aquino government to say that the abuses are unacceptable, there must be proactive measures to protect Filipinos.’ Migrante

MANILA – Progressive groups here in the Philippines are calling on the Aquino administration to act on the reported cases of crackdown on Filipinos residing in Sabah.

“The crackdown on Filipino civilians must stop. The abuses must end. The Aquino government should vigorously condemn the atrocities. Aquino himself should speak out against these atrocities. Aquino through the Department of Foreign Affairs should file a formal protest against Malaysia,” Bayan secretary general Renato M. Reyes, Jr. said.

On Monday, the Philippine Daily Inquirer reportedon how the Malaysian authorities are “conducting sweeps” while searching for the followers of Sulu sultan Jamalul Kiram. Amira Taradji, one of the refugees said in her interview with a national daily that Malaysian authorities made Filipinos “run as fast as they could, and shot them.”

Taradji said Filipinos with immigration papers were also jailed. Those, on the other hand, who tried to avoid arrest, were shot.

The national daily reported that at least 79 Filipinos were arrested Friday and 33 more on Sunday morning on “suspicion of abetting the intruders, including providing them with security information.”

Earlier this week, the Department of Foreign Affairs has expressed their “grave concern” on the alleged rounding up of Filipino communities in Lahad Datu. They said, in a statement, that they have asked the Department of Social Welfare Development and other agencies to “document these reports so that appropriate actions could be taken.”

President Benigno “Noynoy” Aquino, himself, on the other hand, has made no further comment on the issue. The last time he spoke about the crisis in Sabah, Aquino cited possible conspiracy, saying that the Kiram family could not have done it alone.

According to Bayan, “Malacanang’s silence on the matter means it tacitly approves of the brutal crackdown on Filipino civilians in Sabah. That should not be the case. The Aquino government has the responsibility of ensuring the safety of Filipino nationals abroad. It cannot remain silent in the face of these atrocities.”

On Monday, however, Malaysian authorities have denied the reports of crackdown on Filipinos living in Sabah. “I strongly deny that,” Datuk Hamza Taib said in a report of Malaysian daily The Star, adding that the “focus of our operation in only in the two areas of Kampung Tanduo and Kampung Tanjung Batu.”

Sabah, a nation of migrants

Migrante Partylist, in a statement, said that Sabah’s population “consists mainly not of Malaysians but of migrants and immigrants, peoples that have contributed greatly to the devedevelopment Sabah and Malaysia. These are the same people who have endured numerous abuses by repressive Malaysian security forces through the years.” 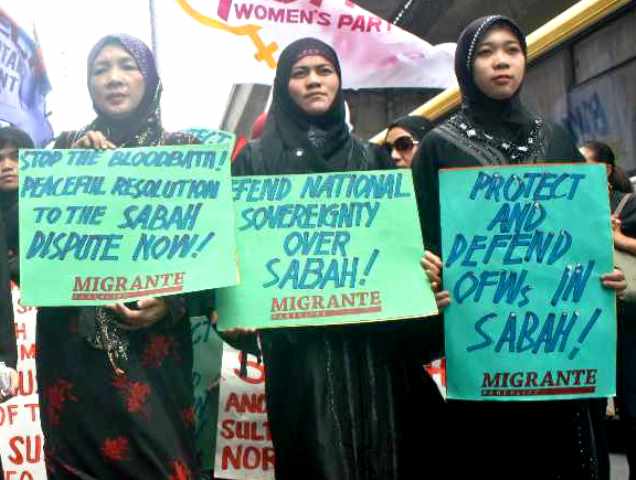 “We are pointing this out to appeal to migrant workers of other nationalities in Sabah and to the international community to join us in strongly condemning the violence and human rights abuses against the Filipino people inI Sabah,” Connie Bragas-Regalado of Migrante Partylist said.

Many Filipinos, mostly Ilocanos, Bisayas, Chavacanos, Kapampangans and Tagalogs, she said, have migrated to Sabah to work on its plantations, tourist spots and industries. Other nationalities residing in Sabah are Indonesians, Chinese, Indians, Pakistanis, Arabs, Eurasians, East Timorese, Japanese, Koreans and Brunei Malays.

The crackdown, Regalado said, is “exactly what we feared when the stand-off started. Even before the stand-off, Sabah has already become one of the worst places for any migrant worker. Now with the ongoing conflict and the Philippine government’s continuous complicity, it has become a more dangerous place for Filipino migrant workers and their children.”

Bulatlat.com published a report in 2009 on the poor living and working conditions of Filipinos employed in palm oil plantations in Sabah. It is also “one of the most common destinations of trafficked migrant workers, mostly women,” Migrante Partylist said, adding that about 80 to 90 percent of its migrant workers are trafficked.

Regalado said the Philippine government “is still not doing anything to stop these recent abuses.”

“It is not enough for the Philippine government to say that abuses are ‘unacceptable’. There has to be more pro-active measures in protecting Filipinos in Sabah and to compel the Malaysian government to protect the rights of civilians and migrants in Sabah,” Regalado said, adding that with the continued gross human rights violations, “The Aquino administration has no backbone, no fighting spirit, no compassion for our Filipino people in Sabah.”

No recognition for Moro’s rights

In a statement, Katribu Partylist said the inaction of the Philippine government to address the violence and repression carried out by the Malaysian forces “tantamount to betrayal of the interests and welfare of the Filipino people, from whom the government derives its mandate.”

“Aquino’s refusal to support the Tausug peoples’ rightful claim to Sabah perpetuates the non-recognition and denial of the national minorities’ struggle for their ancestral land rights,” the group said, adding that the issue of upholding the country’s national sovereignty and territorial integrity is also at stake in the crisis.

With the on hand crackdown of Filipinos residing in Sabah, Katribu Partylist said the Philippine government and its agencies are “slow and weak to condemn the atrocities committed against its people.” They referred to the government’s “belated condemnation” of the crackdown and human rights violations against Filipinos as “hollow and hypocritical.”

“At the onset, Aquino did not call for a peaceful resolution of the stand off in Sabah. He brushed off the broad public clamor for the Philippine government to engage in talks with the Malaysian government. He also shunned the call to urge the United Nations to intervene in the conflict. Aquino displayed vain arrogance in not addressing the conflict head on and effectively paved the way for the all-out attacks of the Malaysian armed forces against the miniscule armed followers of the Sultanate,” Katribu Partylist’s statement read.

Children’s rights group Akap Bata partylist, for its part, is calling on the Aquino administration to “protect our Filipino children and countrymen in Sabah” against the reported abuses of Malaysian authorities. The group said the crackdown on Filipino families residing in Sabah has displaced women and children.

“Even pregnant women and children are also harassed by Malaysian police and military in search for Sultan Kiram’s supporters,” the Akap Bata partylist said in a statement.

Lean Flores, national spokesperson of Akap Bata partylist, said the children, being the most vulnerable sector of the society, should be protected at all times.

“Kids can never defend themselves that is why it is the main duty of the state to protect them from conflicts and violence. We are asserting that the government should immediately act to stop the inhumane treatment in Filipinos in Sabah,” Flores said.

The government, the group said, should provide assistance to all evacuating families and their children, citing a study conducted by Ibon Foundation, where children affected by war and rural militarization have been found to have experienced “anxiety, anger, sadness, vengefulness and more.”

Bayan Muna partylist representative Neri Colmenares, for his part, criticized both the Malaysian authorities, for its human rights violations, and the Aquino administration, for its indecisive action, on the reports of crackdown on Filipinos residing in Sabah.

“The death of many of our countrymen warrants fast and decisive action from our government, which should demand that Malaysia allow representatives of the Philippine government and human rights organizations to investigate the reports that many of the 53 Filipinos reportedly killed by Malaysian forces were unarmed civilians,” Colmenares said.

Reacting to media reports of accounts from evacuees arriving in Sulu, Colmenares said “we should do something for them instead of just waiting for thousands of possible refugees to arrive in Tawi-Tawi. This is humanitarian crisis of serious proportions.

The ANC recently reported that about 800,000 Filipinos fear of being affected by the crackdown in Sabah.

If Malaysia will persist in committing human rights violations against the people, it may be “courting a long term insurgency,” Colmenares said.

Makabayan senatorial bet Teddy Casiño said it is high time for international bodies such as the United Nations to intervene and put a stop to the reported bloodsheds.

“Dialogue is the key to settling this dispute and all parties should bring their case on the negotiating table or the ICJ (International Court of Justice),” Casiño said in a statement.

Casiño, last week, has filed House Resolution 3042 and 3043, which seeks to investigate Aquino’s mishandling on the Philippines’ claim on Sabah and calls for the raising of the Sabah claim to the International Court of Justice, respectively.

He added that “it is obvious that Malaysian authorities are targeting not just the forces of Kiram but civilians as well. The Malaysian government should respect Filipinos especially civilians in Sabah. We are civilized nations and we should act as such.”

Malaysian authorities, he said, is supposedly the Philippines’ partner in promoting peace in Mindanao but are now “slaughtering our people.”

“Our countrymen are fleeing on boats. There doesn’t seem to be any form of Philippine government assistance for them. They appear to be on their own, fighting for their lives and fleeing to safety,” Reyes of Bayan said.