You Are Here: Home → 2013 → March → 8 → Gabriela vows bigger protest action on March 8 against different forms of violence against women

MANILA – Two activists were arrested while several others were injured after progressive women’s group Gabriela held their protest action at the Malacañang Palace on Thursday morning, March 7, one day before the International Women’s Day.

A hundred members of Gabriela, coming from different communities in Metro Manila protested against President Benigno Aquino III’s “repeated surrender of the country’s patrimony and sovereignty to foreign powers.” The group particularly criticized Aquino’s inaction in holding the United States Navy accountable for the grounding of the USS Guardian and the destruction it is causing to the Tubbataha reef in Palawan and for turning its back on the Sultanate of Sulu’s claim on Sabah.

According to the groups’ account, “After a scuffle between the police officers and the women activists, the protesters were driven back outside the gates leading to the palace. Many of the protesters were visibly hurt and injured from the severe brutality of the police beating the women. Gabriela’s brief protest program was winding down when some officers moved in and started to grab Gabriela secretary general Joms Salvador as she and her companions were walking out.”

“At least three cops assaulted me, first they grabbed me, and proceeded to strangle me and drag me away from my companions,” Salvador said.

Members of the group pulled Salvador from the police. The police then retaliated by punching and pulling the hair of the rescuers. A total of 16 women were badly beaten and sustained injuries. Personal belongings were either seized illegally or vandalized.

“It was supposed to be a peaceful dispersal. We were walking away from the Mendiola Peace Arch then the police, like a traitor, suddenly grabbed Joms,” said Bim Dela Paz, media liason of Gabriela.

Eule Bonganay, a children’s rights advocate and media liaison staff of the Children’s Rehabilitation Center and Abigail Extremadura of Gabriela Batasan chapter were arrested by the police. Dela Paz said their group is pursuing the release of Bonganay and Extremadura and possibly file criminal charges for the violence committed by the Philippine National Police. 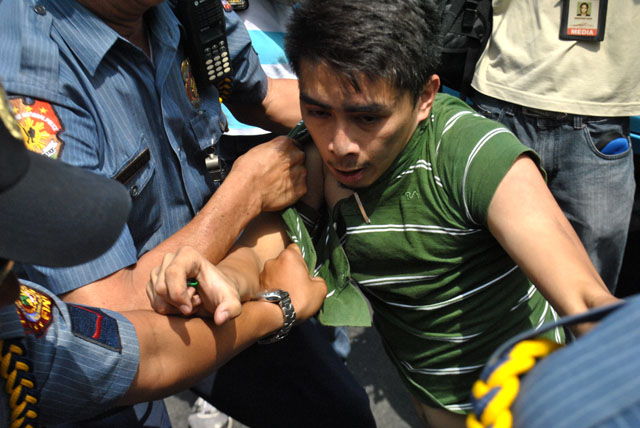 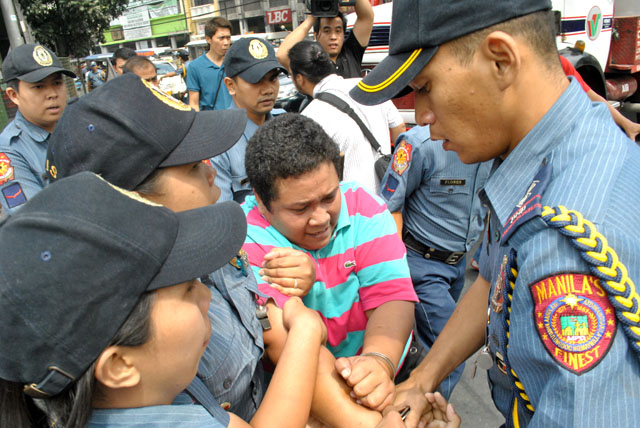 Two of the protesters are arrested by the Manila police yesterday, March 7.(Photos by Pinoy Weekly / bulatlat.com)

Salvador sees the violent dispersal as part of the “deep-rooted fascist character of the Aquino regime” in dealing with the people’s legitimate demands, and “Aquino’s abject subservience to foreign interests” making him write off all notions of national sovereignty and patrimony. “Aquino spares no diplomacy for people whose opinions are different from his! It’s not surprising this regime throws a hardline fit to every legitimate request from the people. Now he is egging Malaysia to unleash lethal force against the minions of the Sultan of Sulu after they lost all hope that Aquino will ever listen to their Sabah claim.”

The group calls for a peaceful and diplomatic resolution to the conflict between the Malaysian government and Sultan Jamalul Kiram III’s clan to prevent further harm to the lives of women and their children.

“Aquino has become the shameless spokesperson for foreign governments. Instead of acting like the President of the Philippines, Aquino has become the defender and ambassador that they can depend on to defend and justify their rape and plunder of our natural resources, and even dispose Filipino citizens to their mercy,” Salvador said.

The women’s group slammed not only Aquino’s “subservience to foreign powers” but also its policies that further torment women. In the past days starting March 4, the group held different protest actions against privatization and increase in oil prices and rates of utilities as kick-off to a larger protest on March 8.

Gabriela said that despite Aquino’s claim of “spectacular growth” and the country being a “rising tiger,” there are still 3.3 million poor families who suffer from hunger. At least 11.7 million Filipinos are still jobless. Health services are still scarce for those who badly need it.

That is why for Gabriela, the Aquino administration has no moral basis for celebrating Women’s Month and the International Women’s Day. “All these empty observances by government agencies about claims of gender equality and token programs for women are useless when the government itself is causing poverty and violence with its economic and political programs that hurt women,” said Nere Guerrero, acting chairperson of the Gabriela Quezon City chapter.

Guerrero cited women in the country side who are forcibly evicted from their ancestral lands to give way to foreign mining companies. Women workers are still under contractualization and are exploited as cheap skilled worker. Women migrant workers also suffer exploitation and often are victims of physical and sexual abuse. Female students’ security is at risk because of budget cuts.

The women’s group blames the neo-liberal economic program of the Aquino administration in accordance to the dictates of the International Monetary Fund-World Bank (IMF-WB) and other financial institutions under the control of “imperialist countries.” This, they said, is also responsible for the rape of the Motherland. The group is referring to the foreign plunder of the country’s natural resources such as oil, gold, natural gas, and other minerals.

“As long as the President treats issues of Philippine patrimony and sovereignty in a thoughtless manner, our Motherland is like a woman raped incessantly by foreigners,” Salvador added. “

While the police inflicted violence against women in their protest this morning, the women’s group said they will never back down. “Women will never be intimidated. This is only the start of a bigger protest action tomorrow and we would be bigger than what they expected,” said Salvador.

On March 8, International Women’s Day, Gabriela pledges to lead thousands of women marching the streets. With the theme of “Bangon, Sulong Kababaihan! Labanan ang tumitinding atake ng rehimeng US-Aquino sa buhay, kabuhayan at karapatan!” (Rise up, onwards women! Fight against the intensifying attacks of the US-Aquino regime on our lives, livelihood and rights!) women – be it mothers from the community, teachers, workers and students will link arms marching on the streets calling for an end to violence against women and rape of the Motherland.

“The regime better think again if it thinks we will be cowering in fear after it crushed our protest this morning. Tomorrow, we will come back in larger numbers and we will keep holding Aquino to account for his anti-people and anti-national policies,” Salvador ended.