‘One Billion Rising’ and Angie Ipong

There are a few benefits to being fat and dark. One of them is being cast as a police officer in films and live performances. The first time it happened was in a comedic role in a music video. Often, I am an abusive cop or, worse, a torturer. When schedules allow I am always happy to oblige. It is not for the money. I am hardly paid (which might be indicative of my supposed thespian skills). And I am not bothered with being typecast, as I have no illusions of a sustained “acting career”.

Last Saturday, we went to this old abandoned house deep in San Juan City to shoot an information plug about Gabriela’s ‘One Billion Rising’ anti-torture and anti-rape campaign. It is by the award-winning ad agency DM9, which also produced those award-winning ads against human trafficking in partnership with Gabriela.

Central to the campaign is Angie Ipong’s story. She was the elderly lady who was accused by the military of being a top rebel leader in Mindanao. When she was abducted in 2005 she was blindfolded for days, tortured and sexually-molested. She was also kept in isolation for 14 days. Angie was slapped with several manufactured criminal charges, which were all dismissed by the courts eventually.

In jail, Angie showed both the inmates and the jail officers why the State hates people like her. She led the cleaning of the cells, initiated dialogues with the warden, started an inmate livelihood program, and led a gardening program that fed everyone in the facility fresh vegetables.

Last Saturday’s shoot re-enacted Angie’s torture. I was one of her torturer while Angie played herself. I was a bit taken aback when I learned that Angie would do it, as many torture victims would not exactly relish reliving the horrors they underwent, even if it is only a re-enactment. But Angie is a very strong lady. She even seemed eager to do it.

During rehearsals, Angie even dared us to be meaner to her. She said she did not mind being hit harder. “They did worse to me,” she said. Acting or not, it isn’t easy to hit an old lady—which is illustrative of the kind of animals who tortured and molested her.

The DM9 crew were as gentle as possible to Angie. They kept apologizing and asking if Angie is okay with being hit and touched. The director also asked us to give it our all. The longer the shoot took the longer our agony in seeing Angie reliving the horrors of her torture—albeit willingly. 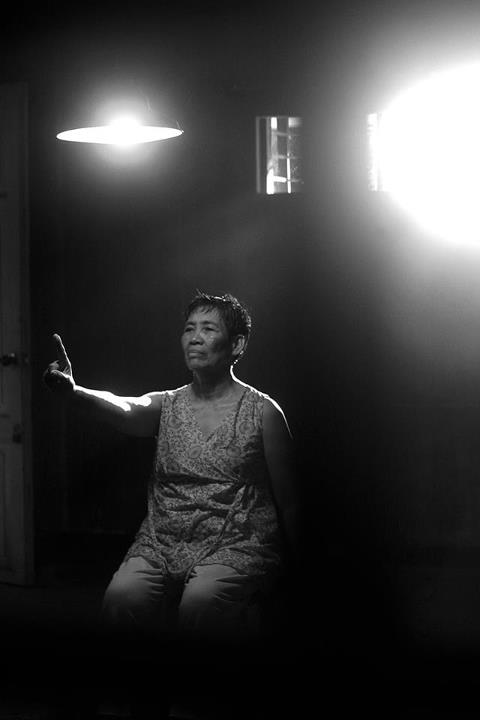 Former political prisoner Angelina Ipong relives the torture she experienced in the hands of military captors. (Photo by Raymund B. Villanueva/ bulatlat.com)

For more than an hour we hit Angie on many parts of her body. I was directed to yank her hair hard and blow cigarette smoke at her face. Another poured a bucket of water all over her while others pushed her every which way. All the while we shouted and laughed at her while she was tied up and blindfolded.

Every take was useful, and some were excellent, all because of Angie. DM9’s veteran crew broke into applause after each take. I guess they never had an actor play the part down pat. As far as I was concerned, Angie wasn’t acting. I could tell. She felt the horrors of it all over again.

I was physically and emotionally spent after the shoot. I noticed I was not my usual talkative self. But Angie even had the energy to conduct an on-cam interview about her torture for nearly an hour afterwards.

Video crews are a boisterous lot on film sets and writers and researchers think they know everything. But while Angie was retelling everything they sat still with mouth agape. Some had tears on their eyes as they listened to tales of the State’s cruelty against citizens.

As with any video project, I can’t wait to finally see this one’s final version. But I have a feeling about this one. Very rarely does a moving shoot result in a bland film. It takes some real talent for a director and editor to bungle a strongly-themed project so powerfully acted in by an inspiring actor.

Watch out for Angie Ipong’s ‘One Billion Rising’ video. It may be out early next year.