Who benefits from mining?

SIPALAY, Negros Occidental – Mining corporations and the Aquino government always say that mining contributes to the growth of the economy.

Contrary to such claim, data from no less than the Department of Labor and Employment (DOLE), which is posted at the website of the Mines and Geosciences Bureau, reveals that the contribution of mining and quarrying to overall employment, as of the second quarter of this year, is a mere 0.7 percent.

Data from the MGB further reveals that while the gross production value in mining as of the second quarter of this year is P51.2 billion ($1.219 billion), the taxes, fees and royalties from mining is only P760.1 million ($18.09 million), or a mere 1.48 percent of the gross value.

At the ground level, residents interviewed by the International Fact-Finding and Environmental Mission (IFFEM) organized by the Asian Peasant Coalition and Kilusang Magbubukid ng Pilipinas (KMP), said benefits from Philex’s mining operations are minimal, if not insignificant. 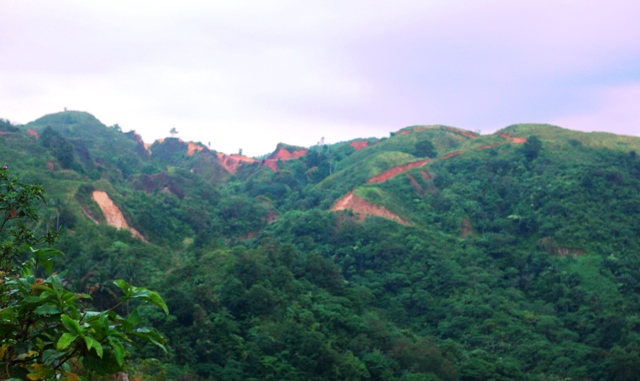 “Roads” built by Philex for its exploration activities seen from afar.(Photo by Ronalyn V. Olea/ bulatlat.com)

Benigna Bargazo, 48, a resident of Vista Alegre subvillage, Nabulao village, Sipalay, said that in 1996, when Philex Mining Corporation started its full-blast mining operations in the area, her family was asked to leave. “They paid us P1,000 ($23.80) per hectare and told us that we could transfer to another place where we could still farm,” Bargazo told members of the IFFEM.

A year after, however, Philex said they would use the area where Bargazo built their new house. Again, the family had to move somewhere else. Last year, Philex hired her son and even asked the latter to get a Social Security System (SSS) card. “Contrary to their promise, my son was employed for only 19 days and paid P280 ($6.66) a day,” Bargazo said.

Bargazo is one of what Philex calls as “surface owners.” They are farmers who have been living and farming for years in areas targeted for mining.

Greg Ratin, secretary general of the Kilusang Magbubukid ng Pilipinas (KMP)-Negros said the term implies that the residents only own the surface of the land and the minerals underneath are for Philex’s consumption.

Data from the Mines and Geosciences Bureau Regional Office VI revealed that Philex obtained an Exploration Permit covering more than 4,000 hectares in Sipalay and Hinoba-an. The mining company also obtained a Mineral Production Sharing Agreement (MPSA) covering villages in both towns. In 2011, the Philex publicly announced it is eyeing at resuming full-scale operations in the province. 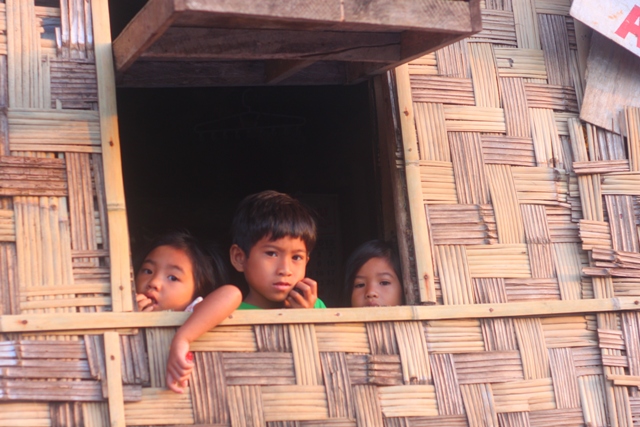 Bragazo and the other “surface” owners were promised a two-month employment but this has not been realized.

In the subvillage of Buyog, also in Nabulao, Philex hired some workers through an agency. They were hired between February 2011 and August this year.

Raymundo Martin, a resident of Buyog subvillage, said his neighbors who were able to work for Philex were hired for only ten days, with no written contracts.

For those who planted the madre de cacao, Martin said, the company bought madre cacao cuts for P2 ($0.05) each and the workers are paid P3 ($0.07) for planting.

Except for Buyog, many of those who were hired are from other villages. Only 20 percent of the workers hired by Philex are local residents and the remaining 80 percent came from other places.

Ratin said such labor practices violate international labor laws, specifically the right of workers to security of tenure and benefits, among others.

The IFFEM learned that there were instances where Philex Mining Corporation paid for loss and damage. 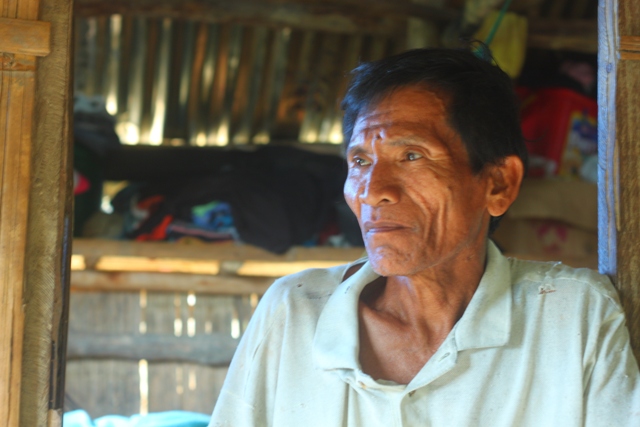 Farmer Germogenes Magbulugtong fears for the future of his children and his grandchildren.(Photo by Ronalyn V. Olea/ bulatlat.com)

Germogenes Magbulugtong, a farmer in Nagtalay subvillage, Talacagay village, used to live in an area within the drilling operations of Philex. His house was bulldozed in June 2011 in exchange for P20,000 ($476).

Asked why he agreed to leave, Magbulugtong said he had no choice as armed security guards roamed around his house.

His family, along with his three children and six grandchildren, transferred to another part of the mountain. Now, they are again being ordered to leave as Philex is set to intensify its “exploration activities.”

“Money is nothing,” Magbulugtong told Bulatlat.com in an interview. “How can we live if the mountains are destroyed? What about the future of our children?”

Magbulugtong called on the Aquino administration to stop the mining operations in their area.