How can we be “withdrawing” from Afghanistan if the US has 550 bases there?

The base-building frenzy in Afghanistan one of the greatest construction booms in modern history–and it was in the middle of nowhere.

Afghanistan may turn out to be one of the great misbegotten “stimulus packages” of the modern era, a construction boom in the middle of nowhere with materials largely shipped in at enormous expense to no lasting purpose whatsoever. With the U.S. military officially drawing down its troops there, the Pentagon is now evidently reversing the process and embarking on a major deconstruction program. It’s tearing up tarmacs, shutting down outposts, and packing up some of its smaller facilities. Next year, the number of International Security Assistance Force (ISAF) coalition bases in the southwest of the country alone is scheduled to plummet from 214 to 70, according to the New York Times.

But anyone who wanted to know just what the Pentagon built in Afghanistan and what it is now tearing down won’t have an easy time of it.

At the height of the American occupation of Iraq, the United States had 505 bases there, ranging from small outposts to mega-sized air bases. Press estimates at the time, however, always put the number at about 300. Only as U.S. troops prepared to leave the country was the actual — startlingly large — total reported. Today, as the U.S. prepares for a long drawdown from Afghanistan, the true number of U.S. and coalition bases in that country is similarly murky, with official sources offering conflicting and imprecise figures. Still, the available numbers for what the Pentagon built since 2001 are nothing short of staggering. 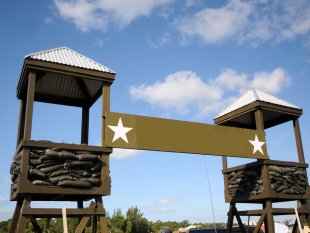 Despite years of talk about American withdrawal, there has in fact been a long-term building boom during which the number of bases steadily expanded. In early 2010, the U.S.-led International Security Assistance Force (ISAF) claimed that it had nearly 400 Afghan bases. Early this year, that number hadgrown to 450. Today, a military spokesperson tells TomDispatch, the total tops out at around 550.

And that may only be the tip of the iceberg.

When you add in ISAF checkpoints — those small baselets used to secure roads and villages — to the already bloated number of mega-bases, forward operating bases, combat outposts, and patrol bases, the number jumps to 750. Count all foreign military installations of every type, including logistical, administrative, and support facilities, and the official count offered by ISAF Joint Command reaches a whopping 1,500 sites. Differing methods of counting probably explain at least some of this phenomenal rise over the course of this year. Still, the new figures suggest one conclusion that should startle: no matter how you tally them, Afghan bases garrisoned by U.S.-led forces far exceed the 505 American bases in Iraq at the height of that war.

There is much confusion surrounding the number of ISAF bases in Afghanistan. Recently, the Associated Press reported that as of October 2011, according to spokesman Lieutenant Colonel David Olson, NATO was operating as many as 800 bases in Afghanistan, but has since closed 202 of them and transferred another 282 to Afghan control. As a result, the AP claims that NATO is now operating only about 400 bases, not the 550 to 1,500 bases reported to me by ISAF.

This muddled basing picture and a seeming failure by the U.S. and its international partners to keep an accurate count of their bases in the country has been a persistent feature of the Afghan conflict. Some of the discrepancies may result from terminology or from the confusion that can result from communications in any international coalition. ISAF, NATO, and the U.S. military all seem to keep different counts. Mainly, however, the incongruities appear to stem from fundamental issues of record-keeping — of, in particular, a lack of interest in chronicling just how extensively Afghanistan has been garrisoned.

In January 2010, for example, Colonel Wayne Shanks, an ISAF spokesman, told me that there were nearly 400 U.S. and coalition bases in Afghanistan, including camps, forward operating bases, and combat outposts. He assured me that he only expected that number to increase by 12 or a few more over the course of that year.

In September 2010, I contacted ISAF’s Joint Command Public Affairs Office to follow up. To my surprise, I was told that “there are approximately 350 forward operating bases with two major military installations, Bagram and Kandahar airfields.”

By then, it seemed, ISAF had lost up to 150 bases and I was thoroughly confused. When I contacted the military to sort out the discrepancies and listed the numbers I had been given — from Shanks’s 400 base tally to the count of around 250 by Younger — I was handed off again and again until I ended up with Sergeant First Class Eric Brown at ISAF Joint Command’s Public Affairs Office. “The number of bases in Afghanistan is roughly 411,” Brown wrote in a November 2010 email, “which is a figure comprised of large base[s], all the way down to the Combat Out Post-level.”

If the numbers supplied by Olson to the Associated Press are to be believed, then between November 2010 and October 2011, the number of foreign military bases in Afghanistan nearly doubled, from 411 to about 800. Then, if official figures are again accurate, those numbers precipitously dropped by nearly 350 in just four months.

In February of this year, Lieutenant Lauren Rago of ISAF public affairs told me that there were only 451 ISAF bases in Afghanistan. In July, the ISAF Joint Command Press Desk informed me that the number of bases was now 550, 750, or 1,500, depending on what facilities you chose to count, while NATO’s Olson and the Associated Press put the number back down at the January 2010 figure of around 400. TomDispatch did not receive a response to a request for further clarification from a spokesman for U.S. Forces-Afghanistan before this article went to press.

Reconciling the numbers may never be possible or particularly edifying. Whatever the true current count of bases, it seems beyond question that the number has far exceeded the level reached in Iraq at the height of the conflict in that country. And while the sheer quantity of ISAF bases in Afghanistan may be shrinking, don’t think deconstruction is all that’s going on. There is still plenty of building underway.

The Continuing Base Build-Up

In 2011, it was hardly more than an empty lot: a few large metal shipping containers sitting on a bed of gravel inside a razor-wire-topped fence at Kandahar Air Field, the massive American base in southern Afghanistan. When I asked about it this spring, the military was tight-lipped, refusing to discuss plans for the facility. But construction is ongoing and sometime next year, as I’ve previously reported, that once-vacant lot is slated to be the site of a two-story concrete intelligence facility for America’s drone war. It will boast almost 7,000 square feet of offices, briefing and conference rooms, and a large “processing, exploitation, and dissemination” operations center.

The hush-hush, high-tech, super-secure facility under construction is just one of many building projects the U.S. military currently has planned or underway there.

While some U.S. bases are indeed closing down or being transferred to the Afghan government, and there’s talk of combat operations slowing, as well as a plan for the withdrawal of American combat forces, the U.S. military is still preparing for a much longer haul at mega-bases like Kandahar and Bagram, a gigantic air base about 40 miles north of Kabul. “Bagram is going through a significant transition during the next year to two years,” Air Force Lieutenant Colonel Daniel Gerdes of the U.S. Army Corps of Engineers’ Bagram Office told Freedom Builder, a Corps of Engineers publication, last year. “We’re transitioning… into a long-term, five-year, 10-year vision for the base.”

According to contract solicitation documents released earlier this year and examined by TomDispatch, plans are in the works for a Special Operations Forces’ Joint Operations Center at Kandahar Air Field. The 3,000-square-meter facility — slated to include offices for commanders, conference rooms, training areas, and a secure communications room — will serve as the hub for future special ops missions in southern and western Afghanistan, assumedly after the last U.S. “combat troops” leave the country at the end of 2014.

Thus far in 2012, no fewer than eight contracts have been awarded for the construction of facilities ranging from a command and control center and a dining hall to barracks and a detention center at either Kandahar or Bagram. Just one of these contracts covered seven separate Air Force projects at Bagram that are slated to be completed in 2013, including the construction of a new headquarters facility, a control room, and a maintenance facility for fighter aircraft.

Improvements and expansions are planned for other bases as well. Documents examined by TomDispatch shed light on a $10 to $25 million construction project at Camp Marmal near Mazar-e-Sharif in Balkh Province on the Uzbekistan and Tajikistan borders. Designated as a logistics hub for the north of the country, the base will see a significant expansion of its infrastructure including an increase in fuel storage capacity, new roads, an upgraded water distribution system, and close to 150 acres of space for stowing equipment and other cargo. According to David Lakin, a spokesman for U.S. Forces-Afghanistan, a contract for work on the base will be awarded by the end of the year with an expected completion date in the summer of 2013.

Even before the new figures on basing in Afghanistan were available, it was known that the U.S. military maintained a global inventory of more than 1,000 foreign bases. (By some counts, around 1,200 or more.) It’s possible that no one knows for sure. Numbers are increasing rapidly in Africa and Latin America and, as is clear from the muddled situation in Afghanistan, the U.S. military has been known to lose count of its facilities.

Of those 505 U.S. bases in Iraq, some today have been stripped clean by Iraqis, others have become ghost towns. One former prison base — Camp Bucca — became a hotel, and another former American post is now a base for some members of an Iranian “terrorist” group. It wasn’t supposed to end this way. But while a token number of U.S. troops and a highly militarized State Department contingent remain in Baghdad, the Iraqi government thwarted American dreams of keeping long-term garrisons in the center of the Middle East’s oil heartlands.

Clearly, U.S. planners are having similar dreams about the long-term garrisoning of Afghanistan. Whether the fate of those Afghan bases will be similar to Iraq’s remains unknown, but with as many as 550 of them still there — and up to 1,500 installations when you count assorted ammunition storage facilities, barracks, equipment depots, checkpoints, and training centers — it’s clear that the U.S. military and its partners are continuing to build with an eye to an enduring military presence.

Whatever the outcome, vestiges of the current base-building boom will endure and become part of America’s Afghan legacy. What that will ultimately mean in terms of blood, treasure, and possibly blowback remains to be seen. Reposted by

Nick Turse is the associate editor of TomDispatch.com. His latest book is The Case for Withdrawal from Afghanistan (Verso).