“It hurts that we lost our mother. She spent her life fighting for the welfare of families living here. She died here. And this is the same place where we would gather our strength to rise back.” – daughter of slain urban poor leader Marilou Valle

SITIO DAMAYAN, Manila – Rossana Bacani, 26, led the way to their house in Sitio Damayan, an urban poor community in Tondo, Manila. With a megaphone at hand, she led the chanting, asking justice for the killing of her mother, also an urban poor leader, Marilou Valle.

“I am very angry. It hurts so much. It is hard to lose a mother like her. I never expected that we would lose her this way,” Bacani told Bulatlat.com.

The fact finding and solidarity mission organized by urban poor group Kadamay last August 22 was Bacani’s first time to go back to their house, where her mother was also killed. She could never imagine how their lives would ever be normal again. If not for the help of people, some she hardly knew, she doubted how their family could ever get by.

Valle was killed allegedly by their neighbors Benjamin and Raffy Tejas. She reportedly had bad blood against the two and some of their family members when Valle and husband Jeorge de Jesus did not support them in the last barangay elections. The Tejas family was also hired by a private company in charge of the garbage dumping in the community to drive the residents away, which, Valle and de Jesus openly criticized.

Bacani promised herself that she would not cry. But after Fr. Carlo Bettante, FDCC blessed the spot where her mother was killed, her eyes betrayed her as it welled up.

“It hurts that we lost our mother. She spent her life fighting for the welfare of families living here. She died here. And this is the same place where we would gather our strength to rise back,” Bacani said. 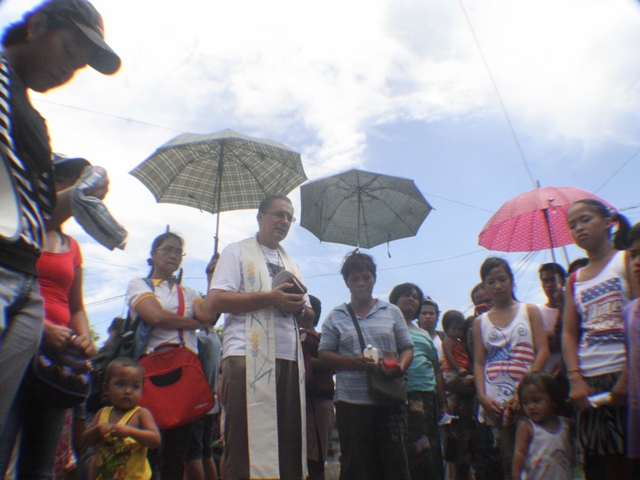 Hard to get by

Since Valle was killed, Bacani said their lives were never normal again.

“Our lives are no longer normal. We know that there is someone out there we have to avoid. We want to go back and live here but it is impossible for now because I fear for the safety of my younger siblings, my nieces and nephews and my own children.”

Bacani said they have no stable source of income.

“We depend on what is handed to us by people, some we hardly know,” she said, adding that they used to earn a small but decent income from their cafeteria in front of their house.

“How can we go back when they warned to wipe out all family members of Marilou Valle?” Bacani added.

They hoped to salvage some of their belongings from their house but when they returned during the mission, most were already stolen. De Jesus said it could be just plain robbery but speculating that the killers of his wife could be behind this is also not that far.

Manhunt for Ben and Raffy Tejas

The daily Philippine Star reported that the Manila Police District has ordered a manhunt for Benjamin and Raffy Tejas for the killing of Valle. The police said they are acting on the orders of Manila mayor Alfredo Lim. MPD Station 1 commander Alexander Navarette said in the report that he has “dispatched a team to Barangay Buntay in Oras, Eastern Samar to track down Benjamin and Raffy Tejas, watchmen of Barangay 105 Zone 8, the main suspects in the killing of Marilou Valle in Sitio Damayan on July 22.”

Navarette added the suspects are also wanted in the province of Samar, where they have been implicated in other murder cases. The same report said that both Benjamin and Raffy have been wanted for murder since September 1998 and 2008, respectively.

“They are armed and dangerous,” he told the Philippine Star.

Navarette said the Tejas brothers, according to a source, “may also be behind the killing of Noel Cabrera, vice president of the Eulogio “Amang” Rodriguez Institute of Science and Technology in Sta. Mesa in May as the brothers and EARIST president Eduardo Caillo – who police are also eyeing as a suspect – belong to the same province.”

In a separate Philippine Star report, Navarette said the team he earlier sent “came back empty handed,” adding that they tracked Raffy to his hometown but reportedly the “fugitive fled to the mountains” while “his brother, Benjamin, remains at large.”

“The hurt that we feel would somehow be lessened if they would be caught immediately,” Bacani said.

“We have the same situation. We all live in urban poor communities. We are fighting against supposed government developmental projects that threaten our homes and livelihood,” Shella Bernal, a resident and a leader from Silverio Compound, said.

A Silverio compound resident, Arnel Leonor, was killed in a violent demolition operation. Bernal said the family could not yet file a criminal case against the police, who allegedly fired live bullets during the demolition.

“The investigation is still pending,” Bernal said, adding that she hopes Valle and the family she left behind would get justice very soon.

Residents from North Triangle also arrived to show their support for the Valle family. Jocy Lopez said she would always remember Valle for being a good person. “She is a good speaker, easy to get along with and very thoughtful.”

It is hard, she said, to imagine how she managed to take care of her responsibility at home and still do something good for the country. Valle left behind 10 children and 14 grandchildren.

“I am very sad because no one has the right to kill anyone just like that,” Lopez said, “These killings have to stop.”

During the fact finding mission, George de Jesus, Valle’s husband, called on their neighbors to muster the courage to talk and bear witness to the case they filed against Tejas.

“They have hurt our family so much. We will not stop,” de Jesus said.

Bacani, on the other hand, said she misses her mother very much.

“We were always together. She was very thoughtful. She was always there for us no matter how tired she is,” she added, “My mother dreamed of making sure my siblings would finish their education.”

But as of now, Bacani’s younger siblings have stopped going to school for a month now. “They want to go back to school. But our lives would not go back to normal until the suspects are caught.”