You Are Here: Home → 2012 → August → 29 → Attacking progressive unions in government hospitals to pave the way for privatization

MANILA – Progressive unions are the Filipino people’s last line of defense against the privatization of government hospitals. The Alliance of Health Workers (AHW), an alliance of unions in government hospitals, together with the other health and people’s organizations, has been strongly opposing the planned sale of the Welfareville compound where the National Center for Mental Health stands. They are also fighting for the right to security of tenure, living wages and benefits of government health workers.

When Executive Order 102 or streamlining in the Department of Health (Redirecting the functions and operations of the DOH) in 1999 was implemented, the AHW vigorously oppose it.

“The EO would result in massive lay-off sof health workers,” said Robert Mendoza, secretary general of AHW. Mendoza added that employees’ groups inside the DOH then had no courage to stand up against the implementation of the EO. The AHW, together with the Malaria Employees and Workers Association of the Philippines (Mewap), a group of health workers and employees inside the DOH, worked hand in hand to fight for their security of tenure.

There is an existing group called Unyon ng mga Kawani ng Kagawaran ng Kalusugan Sentral (UKKKS) in the DOH but, according to Mendoza, it did not act on the issue. The UKKKS, according to Mendoza ,is a pro-management union under the DOH. During the struggle of the DOH employees and health workers against the threat of streamlining, UKKKS was once again activated by the management of the DOH. 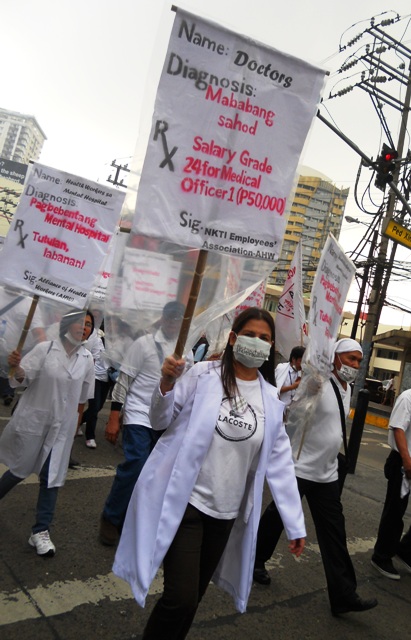 “The DOH management gave all sorts of favors and resources to the leadership of UKKKS so that they could organize the employees. Even the expenses of delegates, from different parts of the country, in meetings were appropriated budgets. Meetings were even held in extravagant venues,” the AHW said in an open letter to health workers, which exposed the true intentions of the UKKKS.

“We have proven our commitment to fight for health workers’ rights and welfare as well as the people’s right to health over the years,” Emma Manuel, president emeritus of AHW, said.

That is why there are efforts to demolish the solidified unions of the AHW in different government hospitals. Manuel said management unions such as the UKKKS tried to break AHW unions by offering huge amounts of money in exchange for membership to UKKKS. In government-retained hospitals, the UKKKS connived with hospital administrations to make health workers sign “membership” to UKKKS without telling them.

According to JP Gubaton, president of Jose R. Reyes Memorial Center Employees Union, health workers are being deceived by UKKKS officials by offering CNA incentives amounting to P40,000 ($930) per employee to entice them to sign up as members of their unions.

“They know that this is the weakness of the people. A health worker who is being deprived of a livable wage, and whose benefits are being taken away would definitely be tempted by the offer. But we always counter them whenever they conduct general assemblies,” Gubaton told Bulatlat.com in an interview.

This scheme is a clear violation of Executive Order 180 or the right to organize of government employees. “The EO also indicates that management should not interfere in unions of the rank and file,” the AHW said in the open letter.

Manuel also pointed out that CNA incentives in government hospitals depend on the savings of that particular hospital and has no fixed amount, thus making the P40,000 being offered suspicious.

Gubaton also said that in December 2011, the employees association of Jose R. Reyes Medical Center (JRRMC) held a general assembly and announced that they were joining the UKKKS. “We went there and explained that the UKKKS is not the accredited union of the Civil Service Commission. The UKKKS, by that time, was already gathering signatures for registration with the Department of Labor and Employment. They claimed that they were for the ‘benefit of the greater good’ because its members would no longer join rallies, especially when UKKKS would become the sole bargaining unit of government health workers,” Gubaton told Bulatlat.com

But Gubaton, president of the JRRMC employees union, explained that they were able to receive their CNA incentive for the year 2010, albeit only last year, because the union has worked for it and had negotiations with the hospital director. “UKKKS claims that they are demanding for a P100,000 ($2,325) CNA incentive per employee. The DOH can’t even give our augmentation budget to fix the electrical wirings in the left wing of the hospital, what more the P100,000 CNA incentive? In fact, because of the UKKKS demand, Health Sec. Enrique Ona disapproved their CNA incentive for 2010. The union had to negotiate with the hospital director to get it but was given later in 2011.”

He also added that nurses were also forced to sign as members. Gubaton said a note that read “all night duty nurses please proceed to supervisor’s office” was posted in the bundy clock. Once in the station they were made to sign as UKKKS members by the chief nurse.

No stand against privatization, corporatization

At the Rizal Medical Center, union members who are opposing the planned privatization of the hospital are being harassed by pro-management union officials and members. A memorandum of agreement was already signed last June 19 between business tycoon Manuel V. Pangilinan, RMC Director Relito Saguilayan and DOH Sec. Enrique Ona. “No one wants to join the picket rally outside the hospital because of fear that they will be reprimanded,” Manuel said.

The RMC is among the 26 hospitals covered by Senate Bill No. 3130 or Corporate Restructuring Program for National Government Hospitals authored by Se. Franklin Drilon.

The RMC is a government retained hospital servicing indigent patients of Rizal province and nearby municipalities for 70 years. “If the hospital will be privatized, they will collect fees from poor patients who will not be able to afford it,” said one employee who refused to be named told Bulatlat.com.

This employee, together with her two other co-workers, would want to fight and stand against the entry of Pangilinan’s group in the hospital. But they were prohibited by the president of the pro-management union and were told not to hold rallies outside the hospital. “We asked for AHW’s support. We planned for a lunch break picket outside the hospital. When it was time, no one wanted to come out. I wanted to but I couldn’t. Robert Mendoza of AHW was calling us but no one wanted to go out. After that, we were called by the management and were scolded,” she said in an interview with Bulatlat.com.

“Pro-management unions like UKKKS do not stand against privatization. In fact, they are even pushing for it,” said Gubaton. He added that they have kept mum on the withdrawal of benefits of health workers, never went out to the streets to protest against privatization and corporatization, as well as the people’s right to health.

“The government wants to institutionalize the pro-management union so that they can easily do what they want without any dissent. This is what is happening in RMC where the union president informs the management of planned protests against privatization,” Manuel told Bulatlat.com.

The Alliance of Health Workers (AHW), which was founded in 1984, has fought for health workers’ rights, as well as the people’s right to health.

The AHW has proven its commitment in fighting against anti-people policies of the government. Citing victories by the AHW and other progressive health groups, Manuel said, they have proven that they have protected the right of the people and the health workers as well.

“The National Center for Mental Health, for one, was up for sale since the time of former president Marcos. We remain vigilant up to now against the government’s plan to sell Welfareville where NCMH stands,” Manuel said.

Under the administration of President Benigno S. Aquino III, Manuel said, the UKKKS has become more aggressive in attacking AHW unions. “As Aquino intensifies privatization, pro-management unions too are getting more aggressive in recruiting members to challenge AHW-affiliated unions because we have proven our opposition to anti-people policies like privatization. The government could not push through with its privatization plans because we are here oppose it.”