MANILA – Progressive groups and netizens expressed disgust over what they branded as “early politicking” of President Benigno “Noynoy” Aquino III and his allies amid the massive devastation caused by floods.

“President Aquino is obviously turning relief operations into campaign sorties for his senatoriables. People can easily see through this shameless use of government funds and exploitation of people’s miseries aimed at getting these people elected,” said Elmer Labog, Kilusang Mayo Uno (KMU) chairman.

“These cheap gimmicks won’t boost these senatoriables’ chances of winning in the elections. Judging from reactions online, these are already backfiring on the president and his candidates,” he added.

One of such photos went viral on Facebook with 864 shares as of press time.

“People need help and genuine solidarity during disasters, not pretty faces that look oh so eager to get their votes. The people won’t be duped by politicians who make so much noise condemning traditional politics but nonetheless practice this kind of politics,” Labog said. 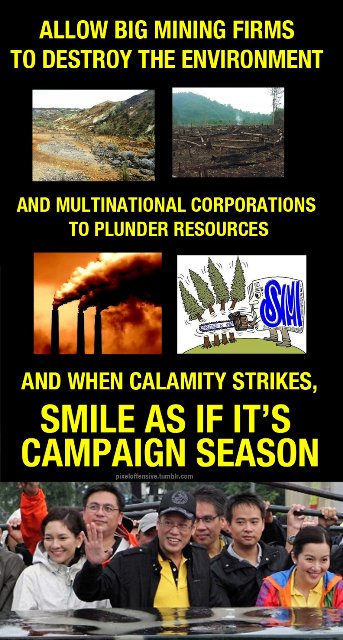 “These senatoriables may even suffer from being associated with the president, whose performance amidst the disaster is deplorable. It’s more likely that the president’s approval ratings will continue to drop,” Labog said.

“President Aquino allowed oil companies to increase prices and power companies to announce a rate hike, provided an opening for call center companies to force employees to work amidst the intense rains, and blamed the poor for our misery,” he added.

In a separate statement, Anakbayan also condemned the sortie as “political gimmickry.”

“We understand if they want to win the 2013 elections. But please, not at the expense of our fellow Filipinos still reeling from the effects of the floods” said Vencer Crisostomo, national chairman of Anakbayan.

“Out of delicadeza, they shouldn’t even argue that it’s not ‘politiciking’. It is so obvious. Best thing that they can do is keep their peace and go about their individual relief efforts without fanfare, like the thousands of volunteers participating in various relief operations across the country” said the youth leader.