By RONALYN V. OLEA
With reports from DEE AYROSO
Bulatlat.com

LOPEZ, Quezon — On June 26, at 11 am, more than 300 activists from different areas in Luzon came to the town of General Luna, Quezon province, many of them, for the first time. It was also the first time for many to visit the tomb of Eden Marcellana, Karapatan-Southern Tagalog regional secretary general.

It was the first stop on the second day of the Save Bondoc Peninsula Movement mercy mission, which is campaigning against the intensified military operations in the two southern district of Quezon province. Eight battalions of state security forces were reportedly deployed in the area, the highest military concentration in the area surpassing even the martial law period.

Many who visited were young activists who were just children when Eden was killed along with peasant leader Eddie Gumanoy on April 22, 2003. Still, there were many who have met her or at least knew Eden by name, and wanted to pay tribute to the fearless human rights activist. A mother of two, Eden was known for leading fact-finding missions and quick-reaction teams that respond to calls for help by victims of military abuses; she was bubbly and cheerful who patiently but sternly reasoned with soldiers that blocked fact-finding teams, and exposed human rights violations at the height of then Col. Jovito Palparan’s reign of terror in Southern Tagalog.

It was the first time in eight years that Eden’s husband, Orly Marcellana, visited his wife’s grave, and he described his feelings in a poem he wrote on the way to General Luna–

(I have been longing to visit you for a long time now
To offer you flowers and light candles on your tomb
You, my comrade and partner in life
Thanks to the mercy mission, I am here at last)

The last time he visited, in 2004, military intelligence agents hovered around. Worried relatives warned him not to visit anymore. His two young daughters who used to live nearby were also not allowed to visit.

In 2008, Ka Orly was among the 72 activist leaders in Southern Tagalog who were slapped with fabricated charges of common crimes. This made it more difficult for him to visit Ka Eden and to see his children. 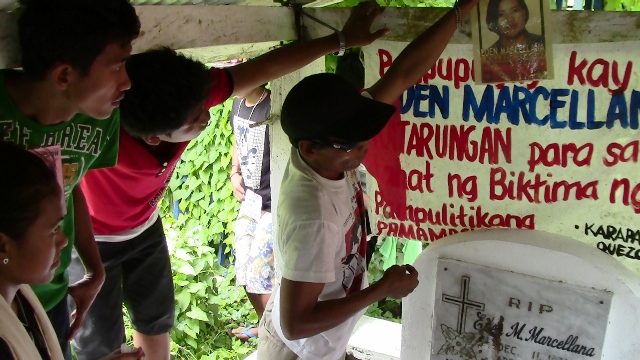 Palparan, the alleged mastermind in the abduction and killing of Eden and peasant leader Gumanoy, is in hiding after a local court in Bulacan issued a warrant of arrest against him for the kidnapping and illegal detention of University of the Philippines students Karen Empeño and Sherlyn Cadapan.

Following Eden’s death, Ka Orly filed criminal charges against Palparan and his men but then Justice Secretary Raul Gonzalez dismissed the complaint allegedly for lack of merit. Finding no justice here in the country, Ka Orly filed in March 2006 a complaint with the United Nations Human Rights Committee. In 2008, the UN rights body issued its findings, stating that the Philippine government failed to protect the rights of Marcellana and Gumanoy and to provide remedies for redress for the relatives of the victims. Since then, however, not one of the recommendations of the UN Human Rights Committee has been fulfilled by the Philippine government.

Ka Orly said it was also the first time since Eden’s funeral that so many people came to her grave. Among the last to walk away from the grave with Ka Orly was a petite teenage girl, who wiped away tears, and who bears a striking resemblance to Eden. She is Dana Mara, the eldest of her two young daughters, who was among the Mission’s delegates.

(Ka Eden, we are here, your daughter and comrades
We continue to carry out the tasks you left behind
We vow to go on with the struggle
Until our beloved country is finally set free)

The tomb sits at a far corner of the cemetery, where one would follow a path that goes under the coconut trees, across cows grazing on the grass, and where one has to hop over other tombs that crowded that spot.

Under a small aluminum roof lies the remains of Eden Marcellana, whose epitaph says “”Martir ng Sambayanan” (martyr of the people), and rightly so.

The visiting activists put four red flaglets at each corner, lit several white candles and left a streamer that says, “Justice for Eden and Eddie – KASAMA-TK”

At 1 p.m., the mission delegates left Gen. Luna, bound for the mercy mission in San Andres and Lopez towns. There were more stops to make at the military camps in Southern Quezon, as part of the week-long campaign against militarization.

It is no surprise that this particular mercy mission was special for Ka Orly. He and Ka Eden both hailed from Quezon province. Ka Eden was from General Luna while he was born in San Rafael village in Lopez.

Ka Orly was obviously happy to be able to visit San Francisco-B village, the site of the second leg of the Save Bondoc Peninsula Movement mercy mission. “This is part of the area where I used to organize and mobilize fellow farmers,” he told Bulatlat.com in an interview.

After almost 15 long years, Ka Orly was able to set foot again in his hometown. It was 1997 when he left their place. “The farmers said they were happy to see me because it had been too long since I was here,” he said.

“In 1997, we were actively campaigning against a dam project and because of our struggle, I had been arrested and tortured by soldiers,” Ka Orly narrated. At that time, he was with the Kongreso ng Magbubukid para sa Repormang Agraryo.

In 1998, Ka Orly then worked with Katipunan ng Samahang Magbubukid sa Timog Katagalugan (Kasama-TK) until he was charged with common crimes in 2008. After the charges against the Southern Tagalog 72 have been recently dismissed, Ka Orly, now 45, serves as the spokesman of Save Bondoc Peninsula Movement.

During the eight-day mercy mission, leaflets were distributed by suspected soldiers maligning him as an “extortionist for the New People’s Army (NPA).”

While Ka Orly was happy to visit San Francisco B village, he also felt agitated knowing that the situation of coconut farmers and agricultural workers remain miserable. “Exploitative feudal relations remain,” he said, citing that the sharing in production is pegged at 70%-30% and 60%-40% in favor of the big landlords.

Even though he continues to be persecuted, Ka Orly is determined to continue fighting for the rights of farmers and other marginalized sectors. Just as what he wrote in his poem, for Ka Eden and for all the martyrs of the Filipino, Ka Orly remains steadfast.