You Are Here: Home → 2012 → June → 1 → As tribute to Benguet coffee farmers and environment, art from ground coffee

As tribute to Benguet coffee farmers and environment, art from ground coffee BAGUIO CITY – Trash-challenged Baguio has produced a young artist who uses ground coffee as medium for his art.

For several months now since the horrible trash-slide at Baguio’s landfill in Irisan, city officials are still burdened by the unrelenting woes about its 300-ton daily garbage and the problem of where to locate its landfill.

“I explored the possibility of making art from used grounds I gathered from a large gourmet coffee chain,” Navarro said. He just finished his Fine Arts studies at the University of the Philippines Baguio this April.

Navarro is perhaps the first Filipino multi-media artist who found “gold” in used ground coffee, in using this as medium for his art and in the process extending its value.

Now in Japan for two weeks, particularly in Sendai and in Tokyo, Navarro joins 89 other Filipino youth as “JENESYS Student Ambassador.” They flew to the neighboring country ‘to help in the trauma processing of the quake and tsunami survivors’. The frail-looking yet mature-thinking young artist-environmentalist left a huge canvass display at The Manor in Camp John Hay to “continue his legacy in young art and environment awareness” in the city that he says “shuns political borders”. Navarro joins two more Cordillera students and 87 other young Filipino professionals chosen from thousands of applicants for Japan- East Asia Network of Exchange for Students and Youths Programme by the Japanese Embassy and the National Youth Commission.

The JENESYS Programme reportedly arose from the hope of providing a sound foundation for strong solidarity within Asia through large-scale youth exchange since 2007. Since then, exchange programmes aimed at promoting mutual understanding and friendly relations.

Navarro said he worked for ten months on the ten faces of Benguet coffee farmers (2ft by 2ft on canvas) with his gathered used,coffee grounds.

‘These are the faces of farmers who toiled for the best-tasting and rich coffee beans,’ Navarro explains. He offered his art as ‘a tribute’ to them. The idea, he said, is to appreciate the farmers’ “toil and sweat.”

His exposure for several months as a volunteer of the Cordillera Green Network assisting farmers in Tublay town, Benguet was his inspiration.

Since time immemorial, the people of Benguet and Cordillera are culturally tied through their coffee. They are aptly pictured as drinking coffee and sharing stories about life and dreams. 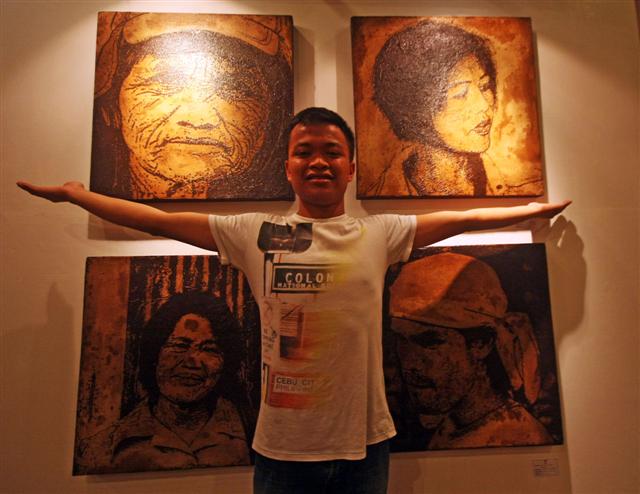 Coffee is a common plant in the “ba-ang” or “ba-angngan” in Benguet, particularly in warmer areas. No one knows who and when coffee was introduced but in the area it is the beverage to keep themselves warm, especially during early mornings before going to farm activities in the highlands, during break time when folks chat about dreams and aspirations and even during festivities such as “cañaos” (indigenous feasts) or big celebrations.

Given the importance of coffee production and processing in commodity development, efforts have progressed on the Benguet coffee to become a One-Town-One-Product (OTOP) commodity.

It is dreamed that Benguet coffee will be back in its stature as “the living tradition of people emphasizing grace, elegance, and passion,” when locals were into coffee drinking as engraved in history of Baguio up to Halsema Highway and the rugged Cordilleras of old.

Accordingly, there are numerous outdoor and indoor uses of ground coffee. It can be an effective agent in composting, as they harbor a carbon-nitrogen ration of “about 20:1” and are “considered a ‘green’ or nitrogen source,” the Greenlivingtips.com said.

It can also be a strong fertilizing agent for the garden, sources of mulch, “a protective layer of material that is spread on top of the soil” while it can actually deter certain small crawling creatures.
Inside the home, coffee grounds can serve as a natural deodorizer because they absorb odors and likewise as decorative purposes.

As a make-over agent, coffee ground, according to the DIYLife.com, can help to “soften and add shine to hair.” A coffee ground rinse is suggested for those with darker brown hair, as coffee grounds are also known for their power as dying agents, and may briefly darken and/or highlight hair.

“For me, it is also a celebration of life,” the young Navarro said. Aside from studying the highly tactile and staining properties of used coffee grounds, he found out that it can be utilized in producing innovative art works such as that portraying the ten Benguet farmers, emphasizing the link between medium and subject”.