“The Aquino government should initiate an immediate review of all international agreements on diplomatic immunity to make sure that cases such as this will never happen again.” Rep. Emmi de Jesus, Gabriela Women’s Party

MANILA — The women’s organization Gabriela is urging the Philippine Senate to review the 53-year old convention that serves to protect diplomats when they commit crimes on foreign soil.

Earlier this week, Gabriela leaders supported the victim 19-year-old Pamela during the recent hearing conducted by the Senate Committee on Foreign Affairs on the rape complaint against Panamanian national Erick Rayneldo Bairnals Shcks. Shcks was able to escape prosecution in the country when the DFA issued him a certification of diplomatic immunity. The DFA justified its action by saying that as a diplomat, Shcks is covered by the Vienna Convention to which the Philippines and Panama are signatories.

The women’s group urged the Philippine Senate to act quickly on the issue, particularly on the immunity of the members of the diplomatic staff who commit criminal acts in the Philippines.

“It’s about time for the Senate to review the 51-year-old agreement. “The basic principle of fairness and justice should be the primary consideration. This case must serve to aid our lawmakers in crafting an implementing law that will protect our citizens from the abuse of such diplomatic immunity,” Gabriela secretary-general Joms Salvador said.

The Vienna Convention signed on May 22, 191 consists of 79 articles, most of which provide for the operation of consulates. It outlines the functions of consular agents and address the privileges and immunities granted to consular officials when posted to a foreign country. 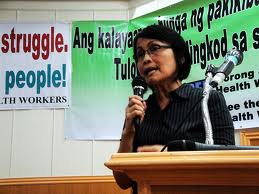 A few other articles specify consular officials’ duties when citizens of their country face difficulties in a foreign nation.

When it comes to the right of diplomats as individuals, Article 36 provides for certain obligations for competent authorities in the case of an arrest or detention of a foreign national. The section provides protection in order to guarantee the inalienable right to counsel and due process through consular notification and effective access to consular protection.

The Convention also lays down the framework of diplomatic relations between independent countries that are signatories to it. In essence, it was established to help diplomats to perform their functions without having to worry about being harassed or coerced by the legal and police authorities of the host country. The Convention gives diplomats immunity from arrest, detention and free passage to leave the host country and return to their own.

During the same Senate hearing, Justice Secretary Leila de Lima declared that the Philippine government and its body of laws do not have clear-cut rules or guidelines when it comes to the accreditation and certification of immunity of members of diplomatic staff.

According to de Lima. Government agencies such as the DFA do not follow any existing set of rules when it comes to the conduct of foreign diplomats and the issuance of certification of immunity to foreign nationals. She said that there are varying procedures, and that often, it takes the DFA some time to issue a certificate and submit it.

“There are no existing rules on that,” she said, adding that Congress should well look into the matter.

The official said given that there are no rules on the issuance of immunity certification, the various agencies should coordinate with each other within 24 to 48 hours in situations when Filipinos have been abused by diplomats.

De Lima also said there is a growing clamor to review the 1961 Vienna Convention on Diplomatic Relations and that there should be stricter monitoring of the accreditation process on diplomatic immunity.
Shcks, who was accused of rape, was released by the police after the DFA released a certification that the Panamanian has immunity from arrest and criminal charges.

After the hearing, Gabriela submitted a letter to the Department of Foreign Affairs urging the agency to immediately demand that the Panamanian government prosecute Shcks.

“The DFA has shown in its previous action that diplomacy is more important than justice. It is not enough to declare Shcks as persona non grata. Now is the time to act more strongly to prove to “Pamela” that her government has not abandoned her altogether,” said Salvador.

No immunity on rape cases

In the same letter, Gabriela also reiterated its call for the Aquino government to lodge a diplomatic protest against Panama “for effectively condoning the conduct of Mr. Shcks.”

Salvador also called on the Aquino government to also take to task the Panamanian Ambassador who has effectively become an accessory to the crime by helping Shcks escape. She said Ambassador Roberto Carlos Moreno “personally assisted in getting Shcks off the hook and even accompanied him in his flight out of the country.”

Finally, the group said it will exhaust all means, including the complaint mechanism of the United Nations Convention on the Elimination of All Forms of Discrimination Against Women.

“We want this case to serve as an eye-opener to the diplomatic community, to show that diplomatic immunity does not give them the license to commit crimes with impunity, especially violence against women, nor should it excuse them from crimes they committed. As a matter of principle, justice should always come first,” Salvador said.

For her part, Gabriela lawmaker Rep. Emmi De Jesus said the DFA also has its share of the blame and argued that by allowing Shck to leave the country, it opened doors for foreigners with diplomatic immunity to abuse Filipinas in the country.

“The DFA must be reminded that its paramount duty is to serve Filipino citizens and not foreign interests. The DFA aided and abetted Shcks’ blatant violation of Philippine laws when it comes to women’s rights. Rape is a heinous crime against person and it should not be bounded by nationality, borders, international agreements or citizenship statuses,” she said.

De Jesus said the Aquino government should act strongly to defend the rights of Filipinos against any violation even if the accused is a person with diplomatic immunity.

“The Aquino government should initiate an immediate review of all international agreements on diplomatic immunity to make sure that cases such as this will never happen again,” she said.