You Are Here: Home → 2012 → May → 14 → Civilians decry abuses as military steps up operations in Quezon villages

Eight combat battalions of the Philippine Army, the Philippine National Police and Citizens Armed Force Geographical Unit (Cafgu) are concentrated in the first and second districts of Quezon, harassing civilians, and wreaking havoc on the lives of the rural folk.

MANILA – At around 1 a.m. of May 9, while farmer Christopher Prieto and his family were sleeping soundly, about nine soldiers came to their house in sitio Pilsen, barangay Cambuga, Mulanay, Quezon.

Armed with high-powered rifles, the soldiers, most of them in civilian clothes and wearing combat boots, accused Prieto of being a New People’s Army (NPA) guerrilla. “I told them I am not. I am just a farmer,” Prieto told Bulatlat.com in an interview.

The soldiers searched his house and the vicinity, looking for guns. “I told them if they find even just one, they could kill me.” His wife, carrying their four-month-old child, and their four other children gathered around him, crying aloud. Finding no firearms, the soldiers left.

Prieto is only one of the many farmers and civilians who had been victims of abuses as the military has intensified its counterinsurgency operations in 22 villages of Quezon province, south of Manila.

On the same day, Prieto left their place. “If I would not be missing, I would get killed,” he said. He said that elements of the 74th Infantry Battalion of the Philippine Army (IBPA) have been terrorizing the civilians in their village.

Meanwhile, Genelyn Dichoso, a resident of barangay 10, Poblacion, Catanauan, said her 17-year-old niece was killed in a crossfire in Lopez, Quezon on April 29. “She was there to visit another aunt when soldiers and NPA fighters exchanged fire. She had six bullet wounds, one in the chest, shot at close range,” Dichoso said.

The family retrieved the body and during the wake, soldiers on board two six-by-six Army trucks stood by the place. Dichoso said the soldiers knew her niece was not a member of the NPA because they recovered from the scene her school identification card. “They never left us until we buried her,” Dichoso said.

During the burial, while they were away, two soldiers went inside the house. “Our neighbor, a ten-year-old girl, was sleeping in the room when the two soldiers, armed with high-powered rifles, went inside and searched the house. When we returned, she was shaking involuntarily and she could not speak. It was only at around 7 p.m. that she was able to tell us what happened,” Dichoso said. Farmers from different towns of Quezon and human rights advocates call for pullout of soldiers from their communities.(Photo by Ronalyn V. Olea / bulatlat.com)

“We do not need the soldiers here in Quezon. They are the ones who ruin our peace. They beat up civilians, not the NPA,” Dichoso said.

“We are alarmed at the real intention of this large scale militarization. While the AFP [Armed Forces of the Philippines] is saying that this is part of their efforts to crush NPA rebels, it is the civilians in rural areas who become victims to human rights abuse by soldiers,” Glendhyl Malabanan, secretary general of Karapatan-Southern Tagalog, said.

Karapatan-Southern Tagalog documented 125 cases of human rights violations in the province. One farmer was forcibly abducted and remains missing to this day. There are four cases of torture, 15 cases of illegal arrest and detention, five cases of illegal search and seizure, among others.

Mirasol Laher, 21, a resident of barangay Calaan, Macalelon, Quezon has been searching for her husband, Felix Balaston, for more than a year now.

On March 27, 2011, Balaston set out to gather banana bud to sell in the local market. “He said he would sell them for rice but he never came home that day and the days that went by,” Mirasol said. 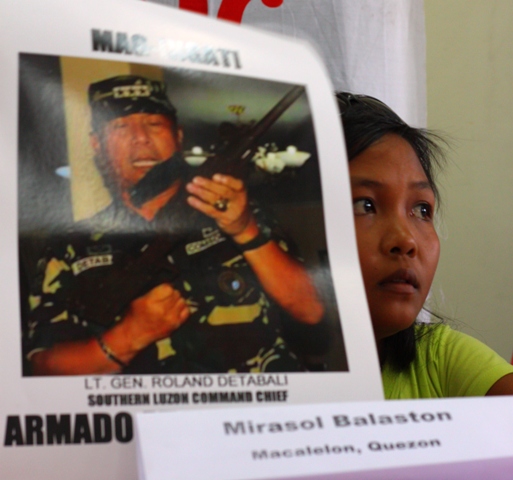 Mirasol has been looking for her husband, Felix Balaston, for more than a year now.(Photo by Ronalyn V. Olea / bulatlat.com)

After three days, Mirasol went to Camp San Miguel Dao in Lopez, Quezon. “His [Balaston’s] cousins told me they saw him being taken inside the camp. They live near the camp. The military denied having him in custody,” she said.

Their son, only seven months at the time Balaston was taken, is now more than a year old. “Sometimes, he would ask for his father. I don’t know what to say. I just tell him his father is not here,” Mirasol said.

Meanwhile, on May 29, 2011, Roel Pejos, 24, along with his wife and six others, were working on their small copra farm at barangay Lubog, San Francisco, Quezon. They were waiting for his brother, Joel, who would bring them rice for lunch that day. Joel never came. 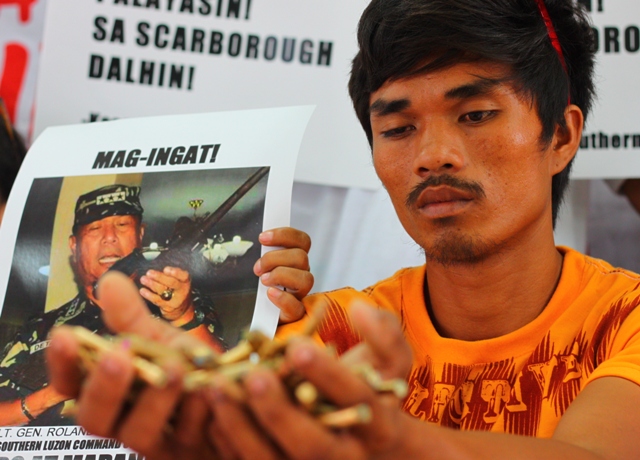 The next day, Joel came on board a different boat. “He told us that soldiers took our boat at gunpoint. They also took our rice, insisting that it would be given to NPA guerrillas,” Roel said.

Later that day, elements of the 74th IBPA, led by a certain Vitalico Sacoso, went to Joel’s house in Talisay, San Andres, Quezon. “Again, they were insisting we would feed the NPA that’s why they took the rice. They never returned neither the boat nor the rice.”

Roel said they had been using the boat for only three months before it was taken. “We borrowed money to have that boat. We are still paying for it,” he said.

“Like its predecessor, Arroyo’s Oplan Bantay Laya, President Aquino’s ‘Bayanihan’ is targeting farmers and rural folk who struggle for land reform and are critical of government anti-people policies,” Malabanan said.

According to Karapatan-Southern Tagalog, soldiers are stationed in houses and barangay (village) centers. Detachments are mounted in about 50 barangays in the rural areas of South Quezon. “Several local farmers’ groups in South Quezon consistent in their struggle for genuine land reform against big landlords and businesses are now targeted by the military in their operations,” the group said.

“We call on the Aquino administration to immediately pull out the military and police troops deployed in South Quezon. While the government proudly banners its counter insurgency program Oplan Bayanihan in the name of ‘peace and development’ and continues to echo its mantra for ‘respect for human rights,’ farmers, workers, and other members of the basic sectors fighting for their democratic rights experience the most inhumane treatment from state forces,” the group said.