As peasants and workers are being battered by incessant price hikes, peasants are demanding for an increase in the government’s procurement of rice and workers for a substantial wage increase.

MANILA – “While the toil of workers brings wealth to the country especially to the few rich, the workers who are supposed to receive living wages are being forced to go hungry because of meager wages. It is the Filipino farmers who produce the country’s food, but they themselves are getting more and more deprived.”

These are the messages repeatedly aired by leaders of peasants and workers who marched separately on Tuesday April 17 yet later held a joint program at the foot of Mendiola Bridge (now Chino Roces) near Malacañang.

The peasants led by Kilusang Magbubukid ng Pilipinas (KMP) marched and started their program at Mendiola when the workers led by the Kilusang Mayo Uno (KMU) arrived marching, too. The KMU members pushed aside the steel barriers and barbed wire that flanked the monument of Chino Roces, so they could march nearer the gates of the Mendiola Peace Arch. The police, meanwhile, formed a barricade behind the gate, with some policemen taunting the protesters and banging their shields with their truncheons. 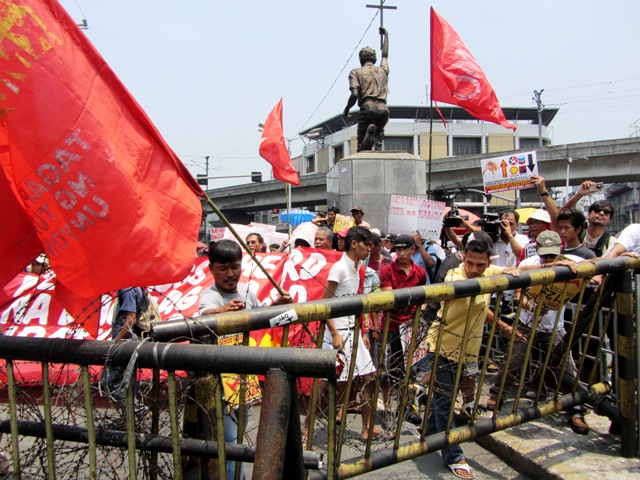 The workers asserted that they want to hold their program as near as possible to the Malacañang Palace— the better, they say, to make President Benigno “Noynoy” Aquino III listen to their demand for social justice.

The peasants also pushed aside the steel barrier and barbed wire on their side of Mendiola to join the workers near the Mendiola Peace Arch gates.

“The Aquino government, acting on the dictates of IMF-World Bank, has been removing subsidies to agriculture,” said Willy Marbella, peasant leader from Bicol. The peasants group marched to Mendiola to demand subsidies from the government, beginning with raising the government’s buying price for palay (unhusked rice) to P20 ($0.47) per kilo so peasants will not go bankrupt.

According to Marbella, the unrelenting oil price increases, rising cost of inputs, land rent and loan interests have been pushing peasants deeper into poverty. The government, he said, is not helping them any while the traders have been buying palay at just P7 to P10 ($0.23) a kilo (but selling rice at P34 [$0.80] a kilo). With the NFA sidelined at influencing the buying price of palay, the farmers complained that they are left to cope with financial losses and mounting debts. 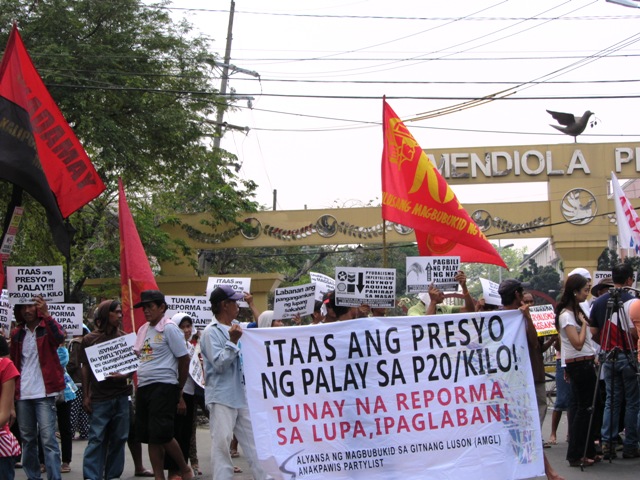 Marbella said that because of the Aquino government’s reduction of budget for rice procurement, the budget of the National Food Authority for palay procurement has reportedly been depleted early. It has left farmers with little choice but to cash in on their harvest by selling to traders.

Roger Soluta, KMU secretary general, said during the rally that last year’s “paltry” wage increase of P22 ($0.51) could not even buy a kilo of rice. He condemned as “insulting” the recent statement of Labor Secretary Rosalinda Baldoz that salaries can only be increased by P13 to P21 ($0.49) this year. The secretary issued her estimated wage hike, or limits of possible wage hike this year, after the government-backed Trade Union Congress of the Philippines filed two weeks ago a wage hike petition with the Regional Tripartite Wages and Productivity Board in NCR. The said wage board is just about to start conducting public consultations this week (April 18).

Except for the TUCP, most labor groups in the country have been pressing Congress to enact a P125 ($2.92) nationwide, across-the-board wage hike, and padlock the “inutile” regional wage boards. This week, as the NCR wage board starts conducting consultation on the TUCP wage petition, even the TUCP has realized that the consultations, given Baldoz’s statement, appear as “staged.”

Soluta said the Regional Wage Boards could not seem to do their arithmetic properly, because it has allowed the rate of price hikes to leave behind wages. In a statement, Elmer “Bong” Labog, KMU chairman, accused the Aquino government of “protecting capitalists’ profits” rather than the ability of workers to live decently. 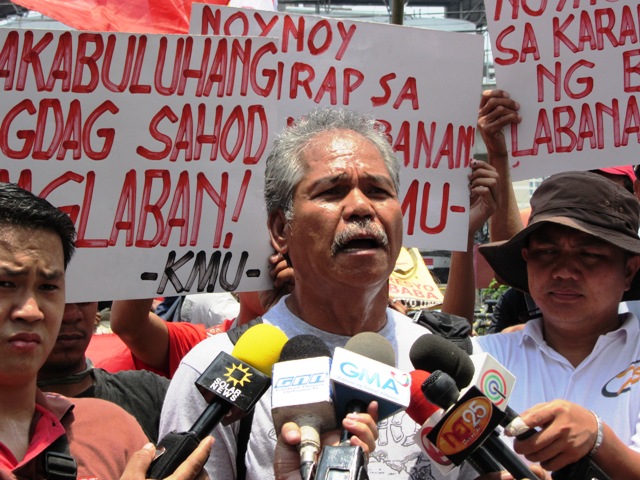 The Labor secretary’s statement about a likely wage hike this labor day, though “insulting” and “limiting” as the labor groups described it, has already been a bit of a departure from flat rejection of wage hikes by the Aquino government a few weeks before. Soluta said the Aquino government ought to consider the unrelenting oil price hikes as supervening events warranting wage hikes as immediate relief.

But in Aquino’s haste to protect the profits of big capitalists, his government has resorted instead to the cheap trick of cherry-picking data,” said Labog. Whether this was done in an attempt to deceive the public or out of stupidity, Labog said, it is “clear this government is manhid (insensitive) toward the plight of workers and the poor.”

It has been nearly a month now since Pres. Aquino rejected calls for a P125 across-the-board wage hike nationwide using an erroneous computation. 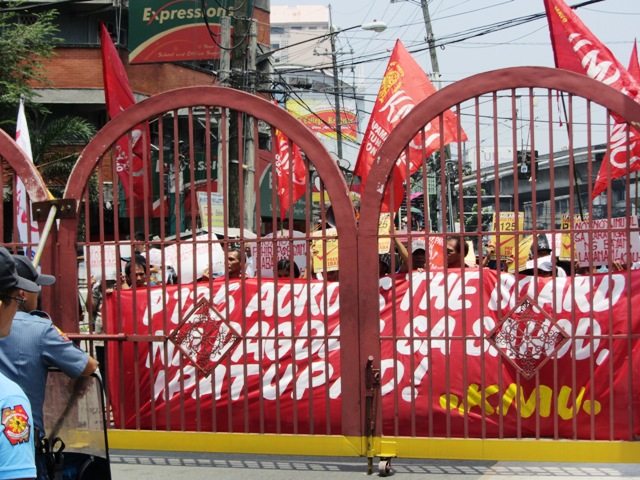 KMU and various labor advocates criticized the computation as it wrongly multiplied the P125 wage hike with total labor force, which currently stands at 38 million, and not with the wage and salary workers, which is currently 15 million.

The progressive labor center said such method is an “old tactic” employed by those opposed to wage hikes – misrepresenting the workers’ demand as if it is too much, only President Aquino’s is viewed as “more despicable.” Aquino has used a patently incorrect data as basis for rejecting the wage hike calls.

If approved, the P125 wage hike, based on a 2012 study of independent think-tank Ibon Foundation, will only amount to a 12-percent reduction in capitalists’ profits.

April 23 National Day of Protest, in preparation for May 1

KMU called on workers and poor people across the country to participate in a National Day of Protest dubbed as “Pambansang Protesta ng Manggagawa at Mamamayan” on April 23. Through this protest, the labor group said they will condemn the Aquino government for pressing down the workers’ wages and promoting contractualization.

“We are calling on the Filipino workers and people throughout the country to condemn the Aquino government’s rejection of calls for a substantial wage hike and its promotion of contractualization. Let us show our anger at a president who does not understand our plight, being the ‘tamad na burges at haciendero’ (lazy bourgeois and big landlord) that he is,” Labog said.

Labog said, “It is now becoming even clearer that this government serves not the poor but the elite few.” He added that workers and poor people “have to unite, act now, and join protests, in order to gain immediate relief through a wage hike and the scrapping of contractualization.”