Anti-mining advocate in Bukidnon killed inside his own home

As village chief, Jimmy Liguyon had consistently rebuffed agreements with mining firms, blocking their operation on ancestral lands of indigenous peoples and making him a target of paramilitary groups and the Philippine Army’s 8th Infantry Battalion.

ILIGAN CITY–Human rights organizations and advocacy groups promoting the rights of indigenous peoples have condemned the March 5, 2012 killing of indigenous leader and human rights advocate Jimmy Liguyon in Purok 2, Barangay Dao, San Fernando, Bukidnon. Liguyon was shot dead inside his house allegedly by a leader of a paramilitary group. He was 36.

According to reports posted on the website of the Rural Missionaries of the Philippines (RMP), Liguyon was the vice chairman of Kaugalingong Sistema sa Igpasasindog to Lumadnong Ogpaan (KASILO), an organization of indigenous peoples from the southern municipalities of Bukidon. Kasilo advocates for the defense of land rights, and the the sustainable use of environmental resources. Liguyon was also the Dao barangay captain and a staunch opponent of mining companies as he campaigned against their operations in the region.

Around 6:00 p.m. last March 5, Liguyon was reportedly inside his house when he was approached and then shot at by a certain Aldy “Butsoy” Salusad. Witnesses said the killer’s father, Ben Salusad, is head of a paramilitary group connected to the Armed Forces of the Philippines, the San Fernando Matigsalug Tribal Datus or SANMATRIDA. The paramilitary group is said to hold a certificate of ancestral domain and has been actively campaigning for the entry of mining companies in the region since 2009. 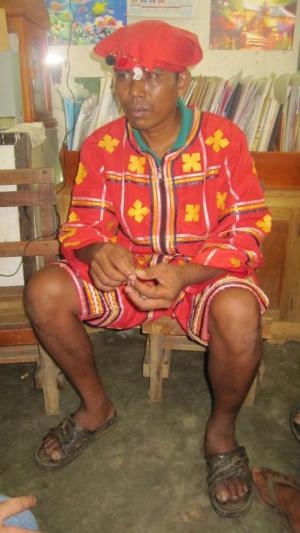 Based on accounts of witnesses, as reported to human rights groups, the killer arrived at Liguyon’s house with 15 other individuals. Liguyon was sitting on a bench with his two brothers when Salusad ordered him to move to another bench. When Liguyon got up, Salusad shot and killed him three times. Witnesses also said that Salusad then justified what he did by shouting that Liguyon had refused to sign an agreement with Sanmatrida. He also reportedly issued a threat that anyone else who went against Sanmatrida would also be killed.

Salusad is also reportedly a leader of the New Indigenous People’s Army for Reform (NIPAR), a paramilitary group directly under the AFP’s 8th Infantry Battalion. Salusad’s father had reportedly confiscated the taxes levied by the barangay government on small-scale mining operations in the area.

In a report by the group FrontlineDefenders, it was said that Liguyon, in his capacity as barangay captain, consistently refused to sign agreements with mining companies , which would have allowed them access to operate on the ancestral lands of indigenous peoples. He also refused to recognize the ancestral domain claims made by Sanmatrida.

The human rights advocacy group also said Liguyon had been subjected to threats since he became a barangay official.

Last October 28, 2011, when he and his wife were going home from a human rights rally in Cagayan de Oro City, they were stopped by armed men. They were taken to a vacant house where the human rights defender was allegedly ordered by the leader of another local paramilitary group Angge Dal-anay to stop joining rallies and to allow mining in Baran, also in Bukidnon.

Earler, on October 16, 2011, , Sanmatrida members went to his house, but he was fortunately not there when they arrived. Following the visit, Liguyon and his family left Dao. Three days before, Ben Salusad, the killer’s father, reportedly called Liguyon and told him that he would be killed if returned to Dao.

“Front Line Defenders expresses grave concern at the killing of the human rights defender and believes that his killing is directly related to his human right activities and in particular his work in the defense of the rights of indigenous peoples in Brgy.Dao,” said the group.

In the meantime, witness also said the barangay chief was killed upon the directives of the AFP’s 8th Infantry Battalion. The 8th IB and its paramilitary groups are said to be behind a series of harassment attacks against anti-mining advocates in the area.

In the days following Liguyon’s brutal killing, reports revealed that farmers from surrounding barrios who wanted to attend his wake were harassed by Salusad’s men. One group was intercepted by Sanmatrida members and their driver was ordered to get out of the vehicle. When the farmers refused to stop the vehicle, they were chased by motorcycles all the way to where the wake and vigil was being held.

In the meantime, there have also been reports that other Kasilo members are receiving death threats for exposing the crime.

As of 14 March, the local police had made no arrest nor charged any individual for the killing.