Military implicated in massacre of farmer, 2 sons in Cam Norte

MANILA – Ella (not her real name), 14, never imagined that she would lose his father and two brothers in one day.

On Feb. 25, just after lunch, Ella saw soldiers approaching their house located in purok 6, sitio Mapatong, barangay Malaya, Labo, Camarines Norte. She then woke up her father, Benjamin Mancera, 54, who was having a nap. At that time, Michael, 10, was studying his lessons and the youngest of three siblings, Richard, aged seven, was playing with bubbles.

Benjamin looked out the window and called out to Richard to come to him. Not long after, their house, made of bamboo and dried anahaw leaves, was peppered with bullets. Ella was lying on the ground beside her father and brother. After 30 minutes of gunfire, there was silence. A soldier came inside, and said in Filipino, “There are dead children. There are dead children.” Benjamin died while embracing his son Richard. In a room was Michael who was found lifeless, still holding a ballpen. Another man was found dead in the sala. Only Ella survived. She sustained wounds on her arms and legs.

“The soldiers peppered the house of the Manceras with bullets even if they knew that there were civilians there. This is a clear violation of the International Humanitarian Law (IHL) or the law on armed conflict that primarily protects civilians and non-combatants and provides restrictions on warfare,” Maricel Delen, coordinator of Karapatan-Camarines Norte, said in a statement.

Following the incident, officers of the 49th Infantry Battalion of the Philippine Army (IBPA) declared that Benjamin was a New People’s Army (NPA) fighter, saying that what happened was a legitimate encounter. Investigation by human rights groups in Bicol revealed that Mancera was a farmer and small-scale miner and concluded it was a massacre. A copy of the report was sent to Bulatlat.com through email.

Lourdes Mancera and her daughter Ella (not her real name), 14, (second from left) attend the burial of Benjamin, Richard and Michael.(Photo courtesy of Karapatan-Camarines Norte / bulatlat.com)

In a three-day fact-finding mission held Feb. 27 to 29, members of Karapatan-Camarines Norte and Karapatan-Bicol interviewed Ella who is recuperating at the Daet Provincial Hospital, still heavily guarded by soldiers and policemen. They also went to the funeral parlor where the father and sons were brought. Joined by some 130 residents of barangay Malaya at neighboring barangay Malibago, the fact-finding team also went to the house of the Manceras. They were able to recover 231 empty shells.

During the interview with members of the team, Ella insisted that her father was not an NPA. While she admitted that an NPA stayed at their house, a certain Ka Pedro, the latter was not able to return fire.

In a separate statement sent through email, the NPA’s Armando Catapia Command confirmed that their comrade, alias Ka Gupi or Rafael V. Llantino, was killed in the incident. The NPA, however, said Benjamin was a civilian.

In her testimony, Ella said after the shooting, the soldiers asked her if she knew the NPA and she replied that the man’s name is Pedro. She said there were about 20 soldiers in their house. The soldiers gave her biscuits and medicines. After around three to four hours, she was placed in a hammock and brought to the barangay (village) hall. She was given first aid and then brought to the Daet Provincial Hospital. It was past 9 p.m. when they reached the hospital. 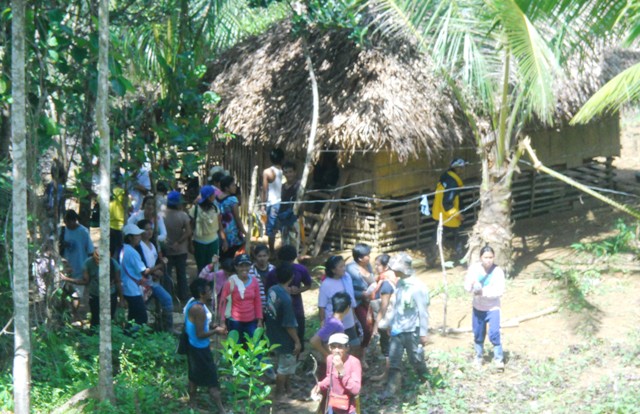 Members of the fact-finding team visit the bullet-riddled house of the Manceras.(Photo courtesy of Karapatan-Camarines Norte / bulatlat.com)

The next day, Ella’s mother, Lourdes, arrived. She has been working as a domestic helper in Manila. Accompanied by the village chieftain, Lourdes was not allowed by the soldiers, who have been guarding Ella, to see and speak to her daughter.

The following day, Delen said, they had to assert the right of Lourdes to visit Ella. When the soldiers finally gave in, a soldier secretly handed an envelope to Lourdes, containing cash amounting to P10,000 ($232). On the same night, the soldiers on board a military truck, went to the funeral parlor and brought some grocery items for the wake of Benjamin and his two sons.

The fact-finding team also learned that on Feb. 26, soldiers of the 49th IB under the command of a certain 2nd Lt. Lee ordered some residents of barangay Malaya to recover the bodies of the Manceras.

One of the soldiers told the local residents that the NPAs fired first. The soldier also warned the residents not to entertain NPA guerrillas in their homes or else they would suffer the same fate. 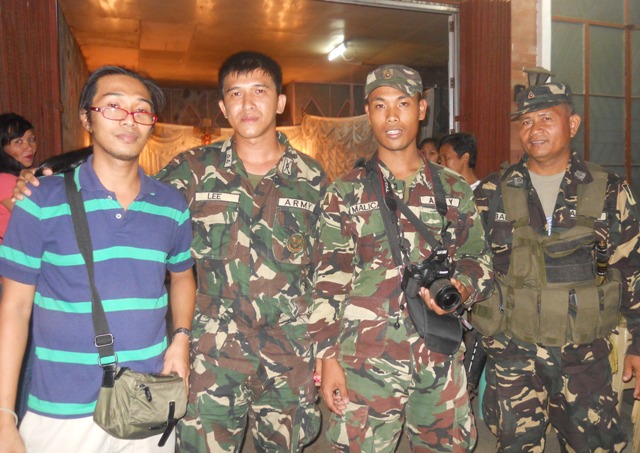 Soldiers guard the funeral parlor where the Manceras where brought.(Photo courtesy of Karapatan-Camarines Norte / bulatlat.com)

In its statement, the NPA’s Armando Catapia Command said that since the counterinsurgency program Payapa at Masaganang Pamayanan (Peaceful and Resilient Communities) or Pamana started in Labo, soldiers have been occupying village halls, chapels and schools in 14 sub-villages. The soldiers, according to the NPA, are conducting census, obliging residents to attend their meetings, threatening civilians of being arrested, stealing their crops and poultry, among others.

The four were buried on March 1 at the Bulhao Catholic Cemetery in barangay Bulhao, Labo, Camarines Norte.

Meanwhile, Ella stopped schooling. Before, she and her two brothers would walk for two hours every day to reach the Malaya Elementary School. Her freedom to live a simple life has been taken away.