“The military’s mind is shallow, if they will campaign against the school just because of the streamer. I see the streamer as the school’s sympathy for Fr. Pops; the nuns sympathy for a priest, their fellow Church member.” – 44-year old mother of two Assumption students.

DAVAO CITY, Philippines — The military threatened to campaign against the Catholic-run Assumption College of Davao (ACD) here if school administration will not tear down a “Fr. Pops’ streamer hung on the front gate fence of the school campus on Cabaguio Avenue. But parents and guardians were unperturbed.

“It’s just a tarpaulin. Why would they (military) insist on tearing it down? Are they guilty, responsible for the killing?” said 52-year old Maribeth Urboda who was waiting for her grandchild.

She added, “The school only wants justice. It’s (streamer) only a call for the truth to come out. I don’t see anything wrong with it.”

Col. Leopoldo Galon, spokesman of the Eastern Mindanao Command (Eastmincom), called the streamer, a “malicious propaganda” against the Armed Forces of the Philippines (AFP).

“We appeal to the school administrator to tear down this propaganda material as soon as possible,” said Galon in a text message to reporters. “If not, we will direct our appeal to all parents or guardians to think twice before re-enrolling their children next school year in this academic institution that allows the spreading of false information about the AFP and helps the cause of propagandists of the CPP-NPA-NDF (Communist Party of the Philippines-New People’s Army-National Democratic Front).”

A 44-year old mother who sends her two children in ACD said, “The mind of the military is shallow, if they will campaign against the school just because of the streamer. I see the streamer as the school’s sympathy for Fr. Pops; the nuns sympathy for a priest, their fellow Church member.”

This mother of two who requested anonymity said, “Even if the military campaigns against the school, it will not change our decision. I and my husband chose this school, among other schools in the city, because we approve with its system for our kids.”

Another mother, who sends her only child in ACD said, “I trust the school. I like how they operate. Their system has assured me of my child’s safety. In fact, I will let my son graduate here.”

A 79-year old grandmother who has three grandchildren studying in ACD said the school produces good students. She also doubts if her children will transfer their kids to other schools after the AFP threat.

He called the statement on the streamer “utterly malicious” and grossly “unfair” to all soldiers who died in the implementation of the Bayanihan campaign. He also said attributing the murder of Fr. Pops to the AFP is “cheap propaganda,” a “vintage CPP-NPA-NDF line.” 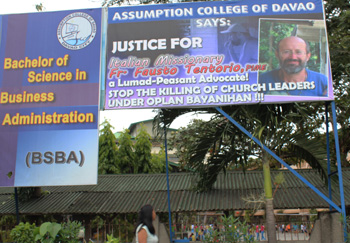 The Fr. Pops tarpaulin still hangs above the fence of Assumption College of Davao. The AFP’s Eastern Mindanao Command has asked the school administration to tear it down otherwise they will campaign against the school.(davaotoday.com photo by Medel V. Hernani)

But groups such as the Bagong Alyansang Makabayan and Justice for Fr. Pops Movement (JFPM) condemned what they called as military’s undue interference on the school’s academic freedom and decried the military’s threats and intimidation against the ACD. “It’s the height of militarist intervention of an academic institution that stands for social justice and democracy,” Julieta Encarnacion, an Assumption sister and convener of JFPM said.

Cristina Palabay, Tanggol Bayi spokesperson, said, “It is not only a blatant infringement on the academic freedom and the respect for civilian authorities in such institutions, but it is also a direct attack against the children’s right to education and to an environment where they can study and learn without fear.”

As the AFP accuses the ACD of toeing the Communist movement’s line, Rubi del Mundo, spokesperson of NDF-Southern Mindanao said, “The military is fast running out of lies and empty replies to counter the wave upon wave of atrocities it is being accused and guilty of.”

The ACD, however, is mum with the issue. Fe Palma, the school’s officer-in-charge, told davaotoday.com they are not entertaining media interviews at the moment.

Meanwhile, Jenelito Atillo, spokesperson of the Department of Education-XI, told davaotoday.com in a phone interview they cannot comment on the issue as of the moment. “We don’t know what transpired. We have to look into it, first,” he said. (With reports from Marilou Aguirre-Tuburan/davaotoday.com)