MANILA — Rosanna Moranto, 28, has been fishing in the freshwaters of Binangonan, Rizal since she was ten. Over the last few years, Moranto complained of a decline in their catch, at an average of one kilo per day. There are times when she could not catch any tilapia, bangus, dulong or kanduli.

Carrying some local galunggong (round scad fish), Moranto joined the picket led by Pambansang Lakas ng Kilusang Mamamalakaya ng Pilipinas (Pamalakaya) in front of the Department of Agriculture (DA) to protest the plan of Bureau of Fisheries and Aquatic Resources (BFAR) to import fish from neighboring countries and impose a ban in ten major fishing areas of the country.

“What would happen to us? We could no longer sell our fish if imported fish will flood the market. What about our families? This [fishing] is our only source of livelihood,” Moranto said in Filipino in an interview with Bulatlat.com.

Fernando Hicap, Pamalakaya national chairman, branded the BFAR’s proposals as insane as it would kill the livelihood of small fishermen and other local fish producers.

According to BFAR, about 900,000 metric tons (MT) of imported fish enter the country annually. Last year, marine product imports reached 800,000 MT, of which 60 percent is galunggong (round scad fish).

Hicap said the landing cost of the locally produced fish is P40 ($0.93) per kilo but those from China, Taiwan or Japan is only P20 ($0.465) per kilo. Hicap said institutional buyers and local fish traders will buy heavily subsidized foreign fish products because these are 50 percent cheaper than the locally produced ones which are battered by the high cost of production. 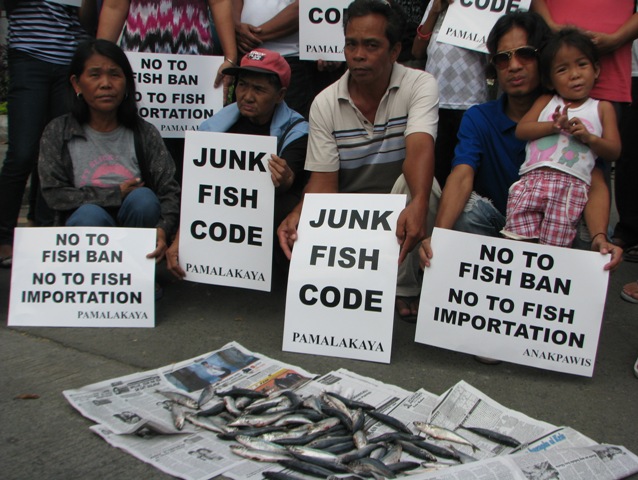 Fisherfolk led by Pamalakaya protest against the government’s plan to import fish products and to impose a ban on 10 major fishing grounds.(Photo by Ronalyn V. Olea/ bulatlat.com)

Pamalakaya countered this, saying that the 1.8 million fulltime and part time work force in the fisheries sector can produce and meet the fish needs of 99 million Filipinos and there is no need to rely on heavy importation. “This wholesale practice of fish importation makes no sense at all,” said Pamalakaya.

Anakpawis Rep. Rafael Mariano also belied Perez’s statement, saying that from 2004 to 2010, there is an increasing trend in fish production. The average annual production growth rate within that period was at 5.8 percent, Mariano said. In 2010, the total volume of fisheries production was 5.162 million metric tons and grew by 1.61 per cent.

Mariano said the Philippines ranked sixth among the top fish producing countries in the world with its total production of 4.97 million metric tons of fish, crustaceans, mollusks and aquatic plants (including seaweeds).

Pamalakaya blamed the country’s membership to the World Trade Organization (WTO), saying that the country’s adherence to neo-liberal trade policies has aggravated the dumping of food and agricultural products surpluses of developed countries resulting in the country’s heavy reliance on food produced by other countries.

The largest fisherfolk alliance also assailed the BFAR’s plan to impose fish bans in 10 of the 13 major fishing grounds in the country. According to the BFAR’s national stock assessment program, ten of the 13 fishing grounds that had been mapped in the country are “very heavily exploited.” These include the Lingayen Gulf, northern Zambales, Visayan Sea, Camotes Sea, Honday Bay, Babuyan Channel, Lagonoy Gulf, Sorsogon Bay, Hinatuan and Dinagat Bay, and Davao Gulf.

Pamalakaya said the ban would affect no less than 500,000 Ilocano, Bicolano and Visayan fishermen and their families. The group said that the current fish ban imposed on sardine producing region in Mindanao has displaced over 100,000 small fisherfolk.

Pamalakaya questioned the veracity of the BFAR’s study, saying it is biased against the small-scale fishermen and only “meant to justify the importation and mass flooding of fish imports.”

“BFAR is promoting a nationwide displacement of small fisherfolk by peddling this lies to the Filipino public,” Pamalakaya said.

BFAR said there are 70 fishermen per square kilometer. Pamalakaya said small fishermen, with backward fishing boat and passive gear, could not even go beyond the 10 to 15-kilometer municipal fishing water.

According to the group, commercial fishing which is composed only of 50,000 operators get 50 percent of the total fish catch annually while municipal fisheries composed of 1.3 million small fisherfolk cover the other 50 percent.

“The DA and BFAR want to eliminate small fisherfolk so the government through the Public-Private-Partnership can sell our fishing waters to corporate clients of Malacanang. The government wants us to eat formalin-peppered fish from abroad,” the group said.

“Where do they want us to go? To the mountains where there are no fish?” said Moranto.

The group is set to hold a nationally-coordinated protest action on Feb. 24 to opposed the BFAR’s proposals and to reiterate its call for the repeal of Fisheries Code of 1998.

Pamalakaya said the law “merely justified the entry of commercial fishing vessels inside the 15-kilometer municipal fishing waters and effectively reduced fishing activities of small fishermen through the imposition of zoning ordinances, color coding schemes and exorbitant fees and penalties against marginal fishermen.