After more than 3 years, Ombudsman acts on torture case

“If the Ombudsman would not fear the military, I would get justice not only for myself but for the other victims of Palparan and his kind.” – Raymond Manalo, torture victim

MANILA – After almost six years, torture victim Raymond Manalo was asked to recount the horror he went through at the hands of the military during the clarificatory hearing at the Office of the Ombudsman, Jan. 31.

Manalo and his brother Reynaldo were abducted in San Ildefonso, Bulacan on February 14, 2006 and were detained in three military camps and two safe houses. Within 18 months of captivity, they suffered from severe torture, endured involuntary servitude and inhumane treatment.

After more than three years, the Ombudman called for clarificatory hearing on the case. The panel, headed by Deputy Special Prosecutor John Torralba asked Manalo questions about his incarceration and torture, according to lawyer Julian Oliva Jr. of the National Union of Peoples’ Lawyers (NUPL).

“It pains me that the Ombudsman seems to doubt the truthfulness of my testimony that I was subjected to torture. I showed them the scars on my forehead, on my back and on my lower limb. They are not that visible now; six years have already passed,” Manalo said in an interview shortly after the hearing. 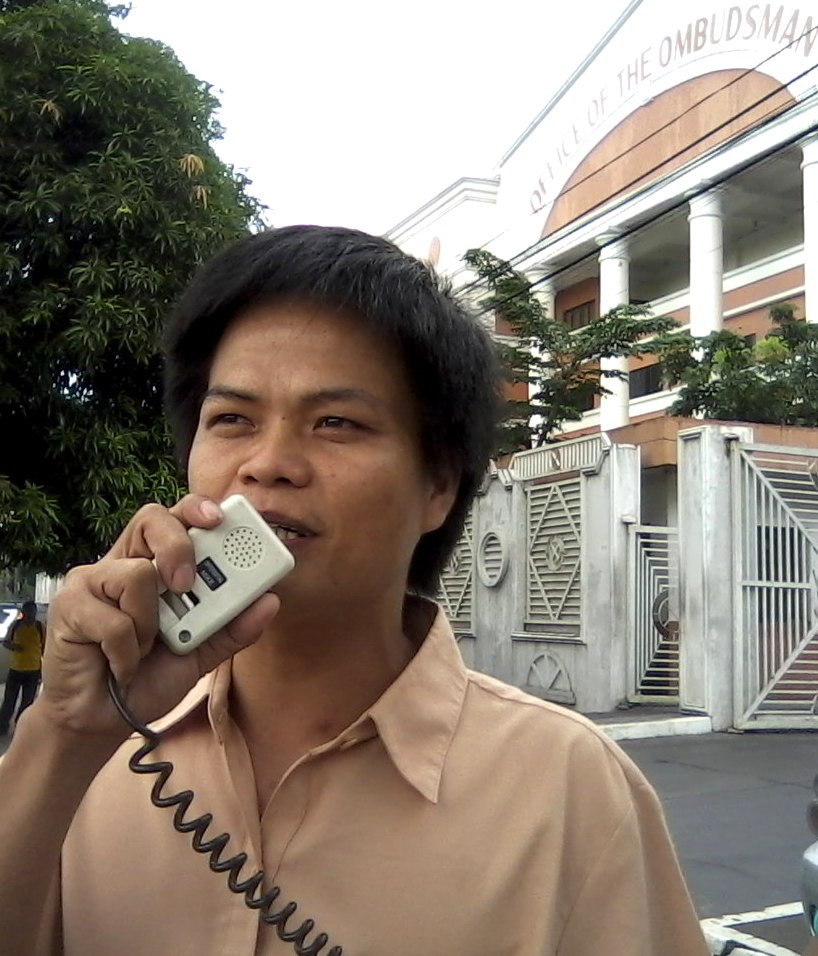 Raymond Manalo is determined to fight for justice, no matter how long it takes. (Photo by Ronalyn V. Olea / bulatlat.com)

Ephraim Cortez, another NUPL lawyer, pointed out that the Supreme Court decision on Manalo’s petition for amparo cited the medical certificate that proved the reliability of Manalo’s testimony.

In a decision penned by former Supreme Court Chief Justice Reynato Puno, the high court said Manalo’s statements were corroborated by the affidavit of his brother Reynaldo and that the testimony and medical reports prepared by forensic specialist Dr. Benito Molino, and the pictures of the scars left by the physical injuries inflicted on them, also corroborate accounts of the torture they endured while in detention.

“His account [Manalo’s] is dotted with countless candid details of respondents’ harrowing experience and tenacious will to escape, captured through his different senses and etched in his memory,” the decision states.

Oliva said the panel also asked why Manalo’s brother Reynaldo has not filed any charges. The panel also requested for a copy of Reynaldo’s affidavit.

Manalo said his brother Reynaldo has not recovered from their traumatic experiences.

Meanwhile, Erlinda Cadapan, mother of missing activist Sherlyn Cadapan, assailed the Ombudsman for not allowing her and the other supporters to observe the proceedings. Mrs. Cadapan and members of Desaparecidos, Karapatan and Hustisya, as well as members of the media, were not allowed to enter the hearing room.

“I am just here to show support to Raymond, our vital witness in the abduction and torture of my daughter Sherlyn and her companion Karen Empeño. Why did they not allow us to observe the proceedings? We would not cause any trouble,” Mrs. Cadapan said in her speech in a picket outside the Ombudsman.

Manalo testified during the preliminary hearings at the Department of Justice (DOJ) on the complaint filed by Mrs. Cadapan and Mrs. Empeño against Palparan and several of his men. Warrants of arrest were issued against Palparan and three of his men for kidnapping and serious illegal detention. Two of the suspects have surrendered but Palparan and M/Sgt. Rizal Hilario remain at large.

“Is this the kind of justice that we have? I have followed the due process but until now, I have not found Sherlyn, and Palparan is still free,” Mrs. Cadapan said.

After years of searching for justice, Manalo remains hopeful. “If the Ombudsman would not fear the military, I would get justice not only for myself but for the other victims of Palparan and his kind,” Manalo said.