MANILA – More groups added their voices to the call for the release of detained artist Ericson Acosta.

Acosta, 39, was arrested on Feb. 13 last year by elements of the 34th Infantry Battalion (IB) of the Philippine Army in San Jorge, Samar. He is charged with illegal possession of explosives.

“Of serious concern to Amnesty International, Mr. Acosta reported that he was abused for 44 hours during interrogation soon after his arrest. He was allowed only two hours of sleep. He was threatened that he would be executed. Death threats and prolonged sleep deprivation during interrogation violate international laws against torture and other ill-treatment, including the Convention Against Torture, which the Philippines has ratified. Any statements made by him at that time, also without the benefit of legal counsel, are inadmissible in court,” King said in a press conference in Quezon City, January 23.

Acosta’s lawyer, Julian Oliva Jr. of the National Union of Peoples’ Lawyers (NUPL), said Acosta was arrested without warrant and without doing anything illegal.

“During interrogation, he was subjected to physical and psychological torture. He was brought to court only after 72 hours, beyond the 36 hours required by law. He was detained in a military camp instead of a civilian jail,” Oliva said. “The complaint was filed without preliminary investigation and inquest proceedings.”

Although the Amnesty International has not yet formally classified Acosta as a prisoner of conscience, King said no one should be subjected to torture and all prisoners have the right to fair and speedy trial. 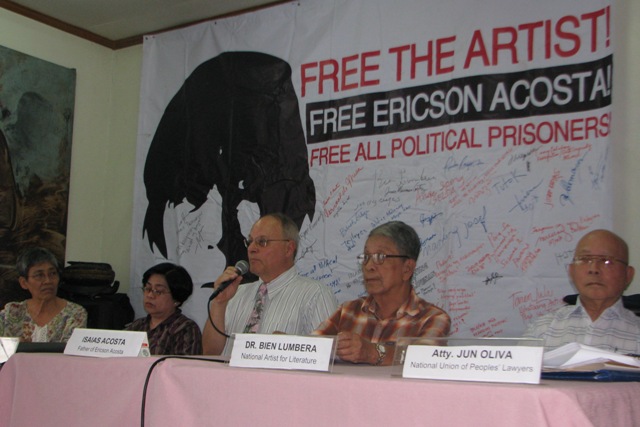 L-R Angelina Ipong of Selda, playwright Malou Jacob, Gary King of Amnesty International, Isaias Acosta and National Artist for Literature Bienvenido Lumbera call on the Department of Justice to immediately issue a resolution on their petition to review the case of detained artist Ericson Acosta(Photo by Ronalyn V. Olea / bulatlat.com)

“In our opinion, he should immediately be charged and his rights of trial begin, or he should be released. An investigation into his mistreatment needs to be done, and if laws were broken, those responsible held accountable to Philippine laws,” King said.

Speaking for the Philippine Center for the International PEN, National Artist for Literature Bienvenido Lumbera said that the group’s 54th Congress in December adopted a resolution calling for the release of Acosta. PEN is an international organization of poets, essayists and novelists.

Lumbera, who was also imprisoned during martial law, said the military’s treatment of Acosta is all too familiar.

Taking off from Lumbera��s statement, Malou Jacob, founder of the Women Playwrights International Philippines and former executive director of the National Commission on Culture and the Arts (NCCA), said it is saddening that the military of the new century is using the same techniques as those in the ‘70s.

Referring to Acosta, Jacob said: “I read his poems…This guy has a brilliant mind. How can the government possibly put in jail a brilliant artist like Ericson Acosta?”

Acosta continues to write poems in prison. Relatives and supporters put up his Jailhouse blog.

Jacob said Acosta’s poetry has the impact of satire and that his poems on daggers are very interesting. “When I was in the NCCA, I said that we have to promote our country as a nation of gifted artists. We should give teeth to that.”

“What did he [Acosta] do? He was researching on Samar. That is the role of the artist–to get the truth. The artist is supposed to serve as the conscience of his society and that’s what he did. He just did what he is supposed to do as a poet, as an artist,” Jacob said.

In a related development, the University of the Philippines, in the 119th meeting of the University Council, issued a statement calling for the release of Acosta and other detained students and alumni of UP.

Other than Acosta, UP film student Maricon Montajes is also detained in Batangas for trumped up criminal charges. Karen Empeño and Sherlyn Cadapan and James Balao, alumnus of UP Baguio, have disappeared and remain missing.

“Though not officially declared in any court of law, these students and alumni have been accused not only of harboring ideas different from those commonly held, but also of putting those ideas into practice through rebellion and engagement in the daily lives of the people,” the statement read. “[T]hese UP students and alumni are the country’s assets rather than its liabilities. Their detention and disappearance, while UP’s loss, are the nation’s too.”

UP called on President Benigno Aquino III to “do justice to everyone and to put a stop to the violation of their students’ and alumni’s rights.”

Acosta’s father, Isaias, thanked those who continue to support his son. He criticized the encampment of military beside the Calbayog sub-provincial jail where Acosta is detained.

Acosta’s lawyers have filed a petition for review before the Department of Justice on September 1 last year. Until now, the DOJ has not yet issued a resolution. Oliva said the complainants have not filed any answer to their petition for review.

Angelina Ipong, secretary general of Samahan ng Ex-Detainees Laban sa Detensyon at Aresto (Selda) reiterated the call for general, omnibus and unconditional amnesty for all political prisoners and to stop the practice of filing fabricated charges against activists.

Anakpawis Rep. Rafael Mariano, one of the authors of the House Resolution 1956, also called for the immediate release of Acosta. The resolution, signed by 38 legislators, urges President Aquino to issue a general, omnibus and unconditional amnesty for all political prisoners.