Demolition in San Juan, among the most violent

“Residents are being forced to relocate where jobs, electricity and water are scarce. Demolitions and forced evictions automatically translate to workers having to leave their sources of income and children would have to stop from going to school.” Gabriela Women’s Party Rep. Luz Ilagan

CORAZON DE JESUS, San Juan City — While sitting down along the small alley of P. Narciso st. in San Juan City, Steve Garsain, 22, stared at their community, which was destroyed by the demolition team. A group of children approached him asking him in Tagalog, “Is it true that your house was demolished? How are we going to play volleyball now?”

“I’m not sure. Maybe we won’t be able to play anymore,” Garsain tearfully told them.

Garsain was born in Corazon de Jesus. He grew up and spent his entire life in the community. Until last year’s demolition, they had a wide place where they spent their weekends playing basketball, volleyball, among others. But their community became smaller and smaller with the continuing “pocket demolitions” over the years. 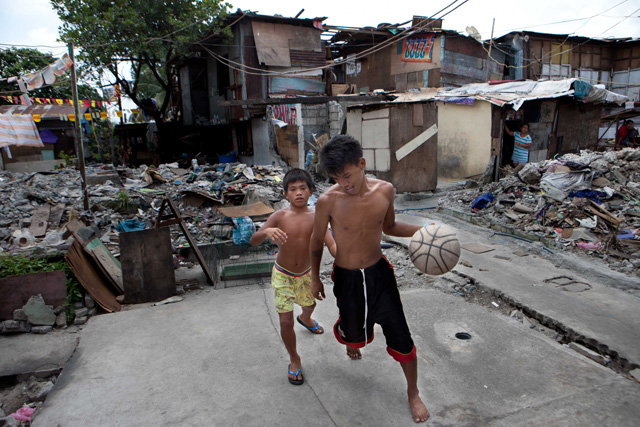 Months before the violent demolition, children play basketball in their community (Photo by Joseph Penney / bulatlat.com)

Today, he is no longer worrying about their play area. He and his family lost their home in a demolition on January 11. Garsain was among the residents who stood their ground amid the violent dispersal of the police. While he did not pick up stones and threw it at the police, he said he helped in providing small stones that his neighbors used.

“I also helped in providing water because we knew that since the demolition would turn violent, there was a strong possibility that they would fire teargas at us. And they did,” Garsain told Bulatlat.com.

The demolition of homes in Corazon de Jesus would supposedly give way to the San Juan City’s extension of its new White-House-like city hall and its government center. At the expense, however, of thousands of families who would be displaced from their homes and livelihood. A relocation site in Rodriguez, Rizal has already been offered but residents refused it, citing that it is too far from their work and that their meager income will probably go to their increased fares.

With this, residents prepared and barricaded their community as early as January 5, when the notice of demolition expired. On January 10, residents received the news that the local government would push through with the demolition, affecting more than 300 families. Finally, on January 11, the residents, together with their supporters from progressive organizations, stood their ground and one of the most violent demolition to date took place.

Most violent demolition to date 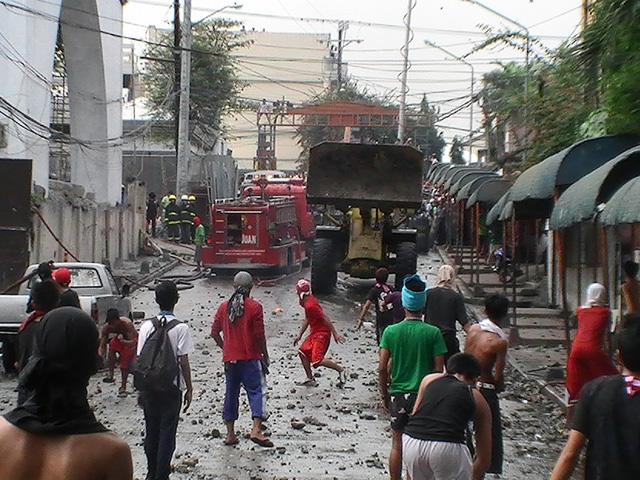 According to Alyansa Kontra Demolisyon, a nationwide alliance of urban poor organization, the demolition of homes in Corazon de Jesus was the most violent and brutal attack to date.

“We knew that there is a possibility that the police would be able to get through our barricade. But we still decided to fight,” Garsain said.

Around 7:00 a.m., the police and members of the demolition team arrived in front of the community. Violence erupted at around 9:30 a.m. when the police moved toward the residents. They used water canons and a bulldozer while, on the other end, the residents threw stones, bottles, pillboxes and molotov bombs.

The demolition team, with its water canon and bulldozer, was forced to retreat. Residents celebrated their initial victory. On the police’s second attempt, they got through the barricade when they used the two entrances of the community. Members of Special Weapons and Tactics unit of the police aimed their armalites at the protesting residents and fired warning shots. Teargas was also fired at the community.

As the demolition went on, residents tried to salvage some of their belongings but members of the police prevented them, barring them along a small alley of P. Narciso, just right in front of their community. More than 300 families lost their homes on January 11.

“I cannot help but be angry knowing how some people are willing to inflict such suffering to others just for their own interests,” Garsain said while watching the demolition team destroy their homes. He added that there were rumors that once their community was demolished, it would become the city hall’s parking lot.

“It is yet to be confirmed. We will just have to wait to see what they really intend to do with the now vacant land. It must be that important that they are willing to drive our families away,” he said in a sarcastic manner.

In a statement, Alyansa Kontra Demolisyon condemned the violent demolition. “We condemn the collusion between the Ejercitos and the Aquino administration in the demolition of homes in Corazon de Jesus.

Bayan Muna Rep. Teddy Casiño said in statement that the demolition is an “overkill,” adding that the it was also inhuman because the police and the demolition team did not consider that the government’s relocation program is a failure.

Mark Louie Aquino, spokesperson of Kabataan Partylist – National Capital Region, was also among the supporters who were arrested. According to a resident who requested anonymity for fear the police might get back at him, Aquino was merely sitting down when three police officers pushed him to the wall. He tried to escape but the police eventually got him and started to beat him up.

“The mothers who were there tried to help him and stop the police from beating him up. But there were too many policemen mauling Aquino,” the resident said. The resident added that the police insisted on arresting leaders because they were very angry, even if there is no proof that they were the ones who were throwing stones.

“Activists who expressed their support went here not because we paid them to fight for us. They were sincere in helping us, even willing to sacrifice their lives for us. They also taught us how to be strong when we confronted the demolition.”

Meanwhile, youth and students who held an indignation rally in front of San Juan Police Station were dispersed immediately by the police. While they were retreating, four more students were arrested.

“I cannot explain how we are feeling right now. I am so angry” Max Santiago of Sining Bugkos told Bulatlat.com right after the arrests. The police reportedly beat up students who were arrested on their way to the police station.