MANILA — In the immediate aftermath of a landslide that had killed 36 (with unidentified number still declared as missing) in the gold-rich Pantukan, Compostela Valley, vultures have swooped down on the unearthed dead and their families. Armed with high-powered rifles, they are forcibly implementing the Aquino government’s order to drive the surviving small-scale miners and their families away from the rich mining area.

President Benigno “Noynoy” Aquino III has done an Arroyo and blamed the small-scale miners and victims for “dangerous mining.” On countless occasions, he has also previously expressed preference for large-scale, foreign mining companies. But his immediately issued order to have the said rich mining area vacated by the poor, supposedly for their safety, would only benefit more the large mining companies who have been operating in the area and raring to dig into the lands, according to various critics.

The mountainous area of Pantukan town is host not only to small-scale miners who eke out a living by digging small tunnels in search of gold and copper, but, in recent years, also to various large-scale mining companies who have reportedly been pushing the workers and operators of small-scale mines away from the area, long before the January 5 tragedy. 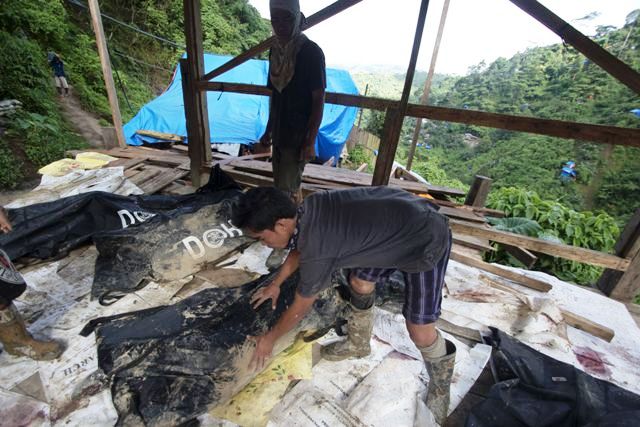 Residents, rescue workers and miners from nearby companies dig on mud, rocks and debris that buried a poor mining community in Pantukan, Compostela Valley, killing at least 36 people. (Photo by Karlos Manlupig / bulatlat.com)

Operating in Pantukan are large mining firms such as the Nationwide Development Corporation (NADECOR) and the Napnapan Mineral Resources Inc. that have been carrying out large-scale operations within a government concession of more than 4,900 hectares.

The US-owned Russel Mining and Minerals Inc. (an affiliate of the US global mining company St. Augustine) has also been operating a 4,000-hectare concession in the areas of Lumanggang, Chogdan, Gumayan, Biasung, Panganasun and Diat, also in Pantukan.

Russell Mining reportedly maintains a big number of armed personnel in Mindanao to protect its exploration area and the Americans who run its $30-million investments over the 792 million tons of gold and copper deposits.

Xstrata, one of the three biggest mining corporations operating in the Philippines, is reportedly aiming also to operate an open pit mining in four provinces of Mindanao, according to the environmentalist group Kalikasan-PNE.

The Compostela Valley mountains are considered to be among the biggest repositories of untapped gold and copper ore.

Malacañang described the Pantukan tragedy as “totally unacceptable.” But it is actually the Aquino government that’s being blamed by many for the tragedy.

“The US-Aquino regime has shamelessly caused the January 5 Pantukan landslides. The tragedy has put to the fore the disastrous policy of the US-Aquino regime that favors large-scale mining like that of US-owned Russell Mining, and the dislocation of small-scale miners in the area,” said Anvil Guinto, spokesperson of the New People’s Army operating in Southern Mindanao.

In a statement, Guinto charged that the tragedy and the aftermath demonstrated the ugly character of Aquino’s puppetry to greedy, hostile and destructive large-scale mining firms in the countryside.

Aside from the revolutionary group operating in the area, leaders of progressive peoples’ organizations and environmentalist groups have also blamed Aquino and his neoliberal economic policies for the killer landslide and for the fact that many Filipinos have been pushed to embrace such a dangerous job.

“The exploited peasant masses have no adequate lands to speak of and the urban poor have no jobs; the latter go to the countryside where they resort to backward and dangerous mining,” said Guinto. They find it “the height of hypocrisy on the part of the US-Aquino government” to heap all the blame on the recent tragedy to the small-scale miners who are in fact the victims of landslide, landlessness and joblessness.

On top of losing their family members to the landslide, small-scale miners now face the threat of losing their homes and source of livelihood, no matter how dangerous it is, because the AFP and the Russell Mining have reportedly combined to make the January 5 disaster “an occasion for justifying the ultimate dislocation of small-scale miners and remove what they consider as the last remaining impediment to their mining operations.”

The Malacañang order of “no-habitation” and forcible evacuation in Pantukan is just “a face-saving measure” meant to conceal its gross negligence in addressing geological disasters while filling its coffers with resources out of the blood and sweat of small-scale miners,” Rubi del Mundo, spokesperson of the National Democratic Front in Southern Mindanao, said in a statement. 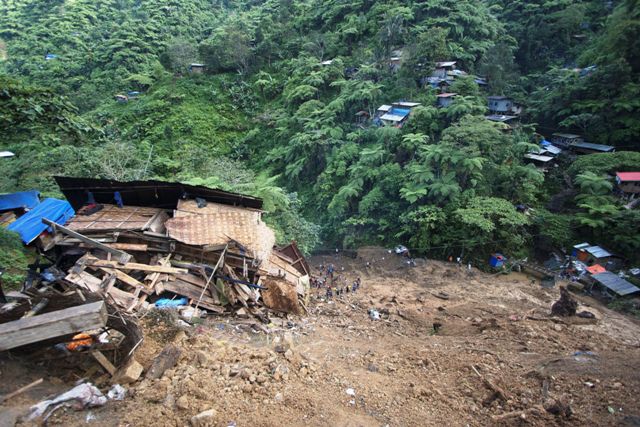 The government has not crafted any program to manage the small-scale mining sector, despite reaping billions of revenues from their operations. (Photo by Karlos Manlupig / bulatlat.com)

Small-scale mining (SSM) operations have been going on for the past 30 years in Pantukan, one of the country’s rich sources of mineral reserves for export and also one of the areas highly targeted by huge foreign mining companies. From SSM revenues the Philippine government has earned billions of dollar reserves. Last year, for example, gross production value in SSM areas reportedly amounted to P26.6 billion ($618 million).

Yet, in return, the government has not crafted any program to manage the small-scale mining sector, rehabilitate the geologically-critical areas, and provide sustainable and safer means of livelihood opportunities for the people, the Panalipdan-Southern Mindanao Region said.

Worse, in times when people got victimized by landslides and other mining-related disasters, which happen in the Philippines more frequently lately, present and past governments only resort to “strong-arm measures toward small-scale miners, while coddling and exonerating large-scale miners of the latter’s culpability,” del Mundo of NDFP in Mindanao said.