Children not spared in military operations

The Children’s Rehabilitation Center (CRC) has documented one case of a child’s death due to indiscriminate firing, 12 cases of frustrated killings, eight cases of illegal arrest and detention, five cases of torture, one case of abduction and numerous cases of attacks on schools.

MANILA – Precious (not her real name), 12, lost both her father and brother in an instant. On February 27, at around 12 noon, suspected elements of the 39th Infantry Battalion of the Philippine Army (IBPA) fired at Rudy Dejos, 50 and his son Rudyric, 26 in Sta. Cruz, Davao del Sur. The bodies of the two were found later bearing gunshot and stab wounds, their nails and fingers crushed.

“They accused my father and brother of being members of the New People’s Army. It is not true. My father was only a farmer and my brother helped my father in the farm,” Precious said during an activity organized by children’s rights advocates, Dec. 4 in Quezon City.

Precious said life has become even more difficult without her father and brother. Her mother has to feed her and her three other siblings all by herself.

Precious’s story is one of the many violations against the rights of children under the Aquino administration’s Oplan Bayanihan. The Children’s Rehabilitation Center (CRC) has documented one case of a child’s death due to indiscriminate firing, 12 cases of frustrated killings, eight cases of illegal arrest and detention, five cases of torture, one case of abduction and numerous cases of attacks on schools.

“The newly installed government of President Benigno Simeon Aquino III promises a righteous path but his first year proved to be a path no different from the previous government,” Jacqueline Ruiz, CRC executive director, said during the presentation of the group’s submission to the United Nations Human Rights Council for the Universal Periodic Review of the Philippine government, Dec. 3.

Seven-year-old Sunshine Jabinez was shot dead by a drunken soldier of the the 71st Infantry Battalion of the Armed Forces in Pantukan, Compostella Valley. The suspect, identified as Private First Class Baltazar M. Ramo, remains in active service.

Recruitment, use of minors by state agents

The CRC also documented cases where children were used by soldiers as shields or guides in counterinsurgency operations.

On August 24, 2010, Mark (not his real name) , 17, and his three cousins were taken by some elements of the 67th Infantry Battalion, Philippine Army in Quarry Sopa, sitio Butigan, bgy. San Jose, Boston, Davao Oriental and were under military custody for several days. On August 29, 2010, the soldiers interrogated the victims, forcing them to admit that they are members of the New People’s Army (NPA). The children were told that once they admit it, they would be release immediately. They were forced to sign a document they did not understand before they were turned over to a local council member of Boston. 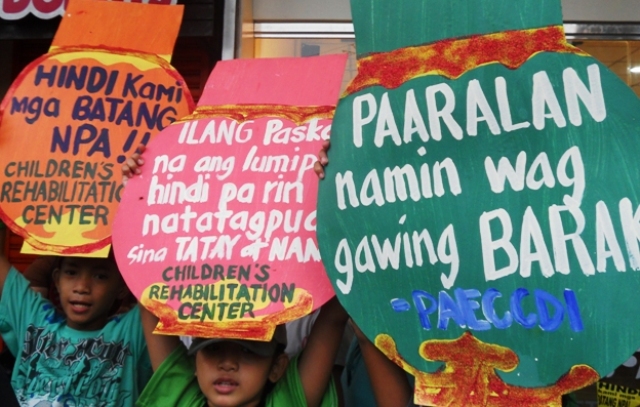 In brgy. Pong-on, San Agustin, Surigao del Sur, three children were falsely branded as NPA guerrillas. On June 26, Reynaldo, 16, his brother Robert, 10 and cousin Jefferson, 10 years, went to their farm to gather coconut for copra. Not long after, Reynaldo heard gunshots. He went to the direction of the gunfire and saw his father handcuffed. Two soldiers of the 29th IBPA held him tightly. Reynaldo and the two other children were brought by the soldiers to bgy. Janipaan. The soldiers subjected Reynaldo and Jefferson to interrogation before they were turned over to the Sto. Nino Police in Surigao del Sur. Pictures of the children were taken together with two soldiers. After a few days, the military issued a statement to the media stating that they have captured three NPA child soldiers after an “intense fire” in bgy. Janipaan.

The CRC criticized the presence of soldiers in day care centers and in schools. In many cases, classes were suspended when soldiers conduct military operations in the area near the schools.

On September 13, 2010, elements from the 50th Infantry Battalion encamped at the barangay hall of bgy. Conconig East, Sta. Lucia, Ilocos Sur where the barangay council office, health, and day care centers are located. Twenty-six pre-schoolers who were attending class saw the heavily armed soldiers. Out of fear, one of the pupils peed on his pants inside the classroom. The CRC said some of the children exhibited stress behaviors such as crying and uncontrolled movements.

During meetings of the Parent-Teacher-Community Association (PTCA), parents said, soldiers warned them against supporting the school because the teachers are “anti-government.” The soldiers accused the teachers of being NPA members. On March 16, 2011 the PTCA president declared a suspension of classes because the children were already afraid to go to school due to the constant presence of the military.

In a statement, Dec. 1, the Human Rights Watch called on the Armed Forces of the Philippines to end the “unlawful use of schools for military purposes.”

The New York-based human rights group revealed that during a recent eight-day investigation in the Cordillera Autonomous Region, they documented five cases in which the military, in violation of Philippine and international laws, had used parts of functioning schools as barracks or bases for military detachments since 2009. This military use of schools lasted for periods ranging from three months to more than a year.

The HRW said that when its staff visited the Sadanga National High School in Mountain Province on November 18, soldiers from the 54th Infantry Battalion were using part of the school. The school has over 200 students, ages 12 to 18.

“Establishing army camps at schools puts both children’s security and their education at risk,” said Bede Sheppard, senior children’s rights researcher at Human Rights Watch. “Schools should be places for learning and play, free from fear.”

Educators told Human Rights Watch that the presence of troops in their schools distracted students from their studies and created an inappropriate environment for children by bringing weapons, alcohol, and pornography into school grounds.

“The laws of war prohibit attacks on schools unless they are being used for military purposes, and limit such use by parties to the conflict. The extended military use of schools may also violate students’ right to education under international human rights law,” the HRW said.

“President Aquino should order the troops to get out, and stay out of schools,” Sheppard said.