Contractual women workers are not receiving maternity benefits. That is on top of the lower wages, heavy workloads, no job security and no union rights that go with being contractuals. �� KMU

MANILA – Contractualization as an employment scheme is a “menace to workers,” said the women workers of the labor center Kilusang Mayo Uno (KMU) last week. With members coming from Southern Tagalog and Metro Manila, they held a picket protest against contractualization at the Welcome Rotonda after an afternoon of discussing the plight and rights of workers.

“Women workers who comprise the majority of contractual workers in the country are speaking out against contractualization. We also express our full support to the workers of Philippine Air Lines (PAL) who are struggling against mass layoff and contractualization,” said Nenita “Nitz” Gonzaga, KMU vice-chairperson for women affairs.

“Contractualization has long been a menace to women workers and to Filipino workers in general. We are intensifying our campaign for its eradication, which is now long overdue,” she added. 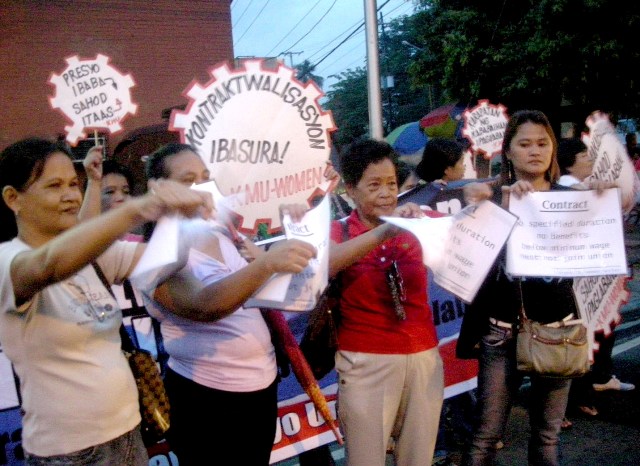 The labor center also condemned the common practice of retrenching women contractuals who get pregnant while on the job.

Lawyer Remigio Saladero explained that there are quite a number of pro-women legislation in the country, the main example being the Magna Carta on Women. But he said that whether these are being implemented or not is the main question. He said the provision ordering Congress to amend or replace laws that discriminate against women has still not been acted upon as of this day.

Even the early compulsory retirement of female cabin attendants in the Philippine flag carrier has not been settled up to now. Meanwhile, the workers are suffering the consequences of such discrimination.

In a separate statement by Robert Anduiza, president of FASAP, the PAL cabin crew’s union, he said that while the Supreme Court remains undecided on ruling against the early retirement of their cabin crew, their forcibly retired members are grappling with consequences that can never be corrected anymore. He said, for example, that they cannot recapture the lost working years, broken up marriages, lost school years of their children who were suddenly removed from schools when their parents were terminated.

Health and safety policies that did not consider women’s condition

There are work conditions that are dangerous to all workers, male or female. But additionally for women, the same condition can sometimes be more dangerous. In a presentation to women workers by Noel Colina, executive director of the Institute for Occupational Health and Safety (IOHSAD), he said night work has been proven cancerous especially to women who have more estrogen in their bodies.

Night work is carcinogenic and it puts workers especially women at risk, based on various studies, said Colina. One of these is the 2001 Rotating Night Shifts and Risk of Breast Cancer in Women Participating in the Nurses’ Health Study in the United States, where researchers documented elevated risk of breast cancer for nurses.

Women workers at a forum on the situation and rights of women workers (Photo by Marya Salamat / bulatlat.com)

Removing the labor code restriction on night work for women is one of the proposals of employers’ groups. But even if the said proposals did not actually amend the Labor Code, the Department of Labor and Employment pressed ahead with ordering its implementation, with the Department Advisory Number 4, Series of 2010 (D.A 04-10), where Secretary Rosalinda Baldoz outlines the exemptions from the existing night work prohibitions stipulated in Article 130 of the Labor Code.

According to the IOHSAD, a non-stock, non-profit, non-governmental health and safety organization, “We should be alarmed that the labor department is allowing pregnant women to do night work.”

IOHSAD quoted researches that pointed to the Light-At-Night theory (LAN). LAN states how night work disrupts the body’s production of melatonin, a known anti-oxidant capable of reducing the level of estrogen. High level of estrogen increases risks for getting breast cancer. This disruption in the circadian rhythm caused by LAN was proposed as potential cause of the increased risk.

Sleeping during the day cannot adequately compensate, according to researches. This suggests the risks that thousands of business process outsourcing workers, who mostly work at night, could face later in life, Colina warned.

Scanty inspection and compliance to health and safety in the workplace

Critics have long pointed out that the health risks to both men and women posed by their working conditions in the Philippines are hardly being checked by the government, given that its labor department has allowed big companies (employing 200 workers and up) to conduct self-assessment of their own compliance to the Department of Labor and Employment’s health and safety regulations.

Before allowing companies to self-assess, the labor department has been notoriously weak at conducting inspections and enforcing their assessment.

But after issuing the DOLE Department Order 57-04, it effectively “ties the hands of the labor department against acting on situations where employers are putting their workers at risks,” said the KMU in a statement in the light of the Oct 7 accident in Keppel Subic Shipyard. The shipyard has previously claimed it complied with health and safety compliance.

In the Philippines, too, contracting cancer due to work is not a compensable disease. The lack of government support in case workers become sick due to their work is also magnified by the long latency of some work-related cancers due to exposure to chemicals.

If the workers were contractuals or already laid off, they have lost whatever health insurance they have before the work-related illness starts affecting them.