‘Righteous path not about scrimping on health care and workers’

These times of typhoons and floods have brought to fore the effects of years of neglecting people’s health and welfare, said Robert Mendoza, secretary-general of AHW. The health alliance observed that every year, “lives and properties are unnecessarily lost to typhoons and floods, evacuees are helped out by fellow citizens, civic, private and non-government groups, as government’s token relief services fail to cover up for its inadequacy and unpreparedness for disasters.”

The health group said the ill effects of the government’s privatization and fees for services schemes are revealed again and again in the dismal state of people’s health.

“Seven out of ten Filipinos still die without the timely and relevant health services and care, sometimes due even to illnesses that should have been easily prevented,” said Vilchez at the rally.

The increasing deaths and cases of dengue and leptospirosis, with patients shouldering most if not the full cost of hospitalization or asking good-hearted donors to pay for the bill, and the continuing prevalence of diseases of poverty like tuberculosis, pneumonia and diarrhea, and rising cost of health services in public hospitals, are depressing real-life tragedies of government neglect, the health coalition said in a statement. 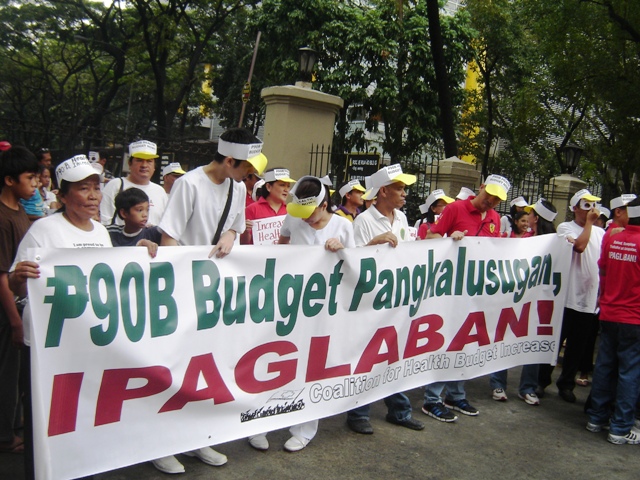 For 2012, the Coalition for Health Budget Increase calls for “at least P90-billion ($2.1b), more than twice the government’s proposed P42.693-billion ($981m).” The amount is still admittedly not enough, the health groups say, but at last it would give for a start a somewhat comprehensive health care covering preventive, curative and rehabilitative aspects of it, including disaster preparedness.

It would also indicate that the Aquino government is trying to prioritize the people’s health, Ebesate said.

Unfortunately, the health coalition laments that the Aquino administration has been “turning a deaf ear” to calls for prioritizing health. “It is no different from the Arroyo administration,” they said, pointing to how this government has slashed the health budget for 2011, gave zero increase to hospital’s operational budget for 2012, and put up public hospitals for privatization or public-private partnership.

By 2012, some public hospitals that have been the last hope of poor patients, for example, the San Lazaro Hospital, Philippine Orthopaedic Center and National Center for Mental Health, and perhaps even the Philippine Heart Center, are in danger of being auctioned off or relocated to far-off unknown location, union leaders from these hospitals separately disclosed during the rally at the Mendiola Bridge.

Fees and neglect continue to haunt patients as public hospitals are forced by lack of budget to exact fees for its services, while its overworked health personnel struggle to attend to bigger number of patients.

The number of the country’s health workers remains pegged at some 70,000, or the same since twenty years ago, despite an increase of 40 million to Filipino population. The health personnel to patient ratio has worsened to the extent that in some public hospitals, health personnel are detailed for more than 16 hours per duty, said Ebesate.

Despite their longer and more intense work hours, the public health workers are steadily forced to cope with eroded wages and benefits.

“Due to the DBM impounding unspent budget as a result of unfilled positions, the benefits of savings will no longer be given to us,” said Ebesate. He told the Aquino government that the “real righteous path is not about scrimping on the budget for health and health workers, but giving health services and taking care of those who provide health care.”

Instead of taking on its responsibility of improving public health services, the government plans to remove subsidies to the maintenance and other operating expenses of public hospitals by year 2014, and personal services (health workers’ salaries) by year 2020, said Robert Mendoza of AHW.

Although Sec. Ona himself has admitted that the cost of health services will likely increase with privatization, the government, said Mendoza, is “passing the burden of health financing to us people through health insurance (mainly Philhealth).

Much of the increase in the original DOH-proposed budget goes to Philhealth, which works by collecting premiums, a form of specialized tax, from the people. These premiums are used to improve public hospitals that use the improvements, in turn, to gain more revenues for its operations.

Philhealth and privatization are the “backbone of President Aquino’s Health Agenda,” said the Coalition for Health Budget Increase in a statement. Following a World Health Organization-World Bank-International Monetary Fund prescription, the Health Agenda “aim to cut expenditures and generate revenues for foreign debt payment, policies like privatization, user-fee schemes, contractualization, wage freeze and eradicating unions.” The moves, said the health coalition, are meant not exactly for better health outcomes nor health care services, but more for increased business and profits for private and foreign corporations, “at the expense of the people’s welfare and violations of health workers’ rights.”

The health groups vowed to “continue serving the Filipino people with or without disasters.” They appealed to the public to strive with them for people’s health and rights, starting with working for a higher health budget, and pushing for free, accessible and affordable health services.