Flood victims accuse Aquino govt of sleeping on the job

Typhoon Pedring began ravaging Luzon on Sept 26, but it was only on Oct 2 that an “emergency” meeting to address this was called by the Aquino government.

MANILA — Outrage over the Aquino government’s seeming “lack of concern for the country” continues to be aired today by ordinary citizens. Some of them gave vent to their frustration over the government’s inability to respond effectively to disasters by sending text messages and appeals for help to the media. A big part of Central Luzon is still submerged in deep water as six dams continued to release water until yesterday, but the affected villages got little to no assistance from the government.

This lack of decisive action from the government was punctuated by what many ordinary victims of flooding in Bulacan described as a bit “belated” call for an “emergency meeting” by the government.

Typhoon Pedring began ravaging Luzon on Sept 26, but it was only on Oct 2 that an “emergency” meeting to address this was called by the Aquino government. As of today, some parts of Bulacan are still submerged up to the peoples’ neck. Water supply remains cut off, worsening the lack of potable water especially for villages that are still not being reached due to strong water current or heavy flooding.

Disease outbreaks are feared in cramped evacuation centers because of lack of water and medicines. People out on flooded streets to procure water and food, like in these photos taken in Hagonoy, Bulacan last Oct 2, become familiar sight in some Central Luzon towns after Pedring. (Photos by Bro. Martin Francisco / bulatlat.com)

Affected citizens also smarted from the evident lack of information about their predicament as the people are blamed yet again for supposedly not heeding calls to evacuate. Benito Ramos of the National Disaster Risk Management and Coordinating Council also said something like this when he announced that they will no longer “deliver” aid to people stranded in their homes. The mayor of Calumpit pleaded against the decision, reasoning that the people are stranded precisely because they have no means of leaving their flooded homes. Besides, he said, there is insufficient space in evacuation centers and they could not evacuate everybody.

President Aquino had been in Japan when Pedring hit the country in Sept 26. But when Aquino first landed back home, he was barely heard nor seen by Filipinos, except when he threatened the protesting workers of Philippine Airlines with charges.

Filipinos have been expressing their outrage over the “absentee” President Benigno “Noynoy” Aquino, a social welfare secretary whom they complained of having lingered abroad while typhoons are ravaging the country, the dam operators who ordered the massive release of water simultaneously, and the general lack of relief and rescue equipment that hamper even the immediately cobbled up efforts by the National Disaster Risk Management and Coordinating Council.

AM radio stations were pelted not only by angry complaints against the immediate lack of government relief and rescue, but by diatribes as well over the “anti-poor,” “anti-Filipino” actions of the Aquino government which pressed ahead with collecting VAT on toll roads despite the disasters afflicting the country, and sided with a billionaire employer in forcibly sacking thousands of resisting employees.

Even if the Armed Forces of the Philippines (AFP) arrived “to help, they have no equipment, no amphibian vehicles that could wade through floodwaters,” said an old woman from Bulacan. She added that “Rubber boats are no help in flooded streets here— because a mere scratch against a wall can render it useless.” Days earlier, when floodwaters were just beginning to rise, submerging what should have been ripe for harvesting crops of Nueva Ecija, Bulacan and Aurora, among others, members of the media who have been receiving frantic calls for help from the affected people also called, in turn, on the government to put their rescue and relief operations together as soon as possible.

“Please tell us that the government is doing something,” Jose Taruc of DZRH asked of Jessie Robredo, secretary of the Department of Interior and Local Government in one live interview four days ago. Robredo replied that two battalions of soldiers buttressed by policemen and firefighters were deployed.

But “what good can these 20,000 soldiers deployed for relief and rescue do if they do not have proper equipment such as lighting equipment or generators even?” people asked in frustration as radio field reports poured in revealing that rescue operations had been suspended for the first nights during the rampaging water release of dams. Meanwhile, people were pleading for help from the rooftops of their submerged houses. It turned out that the deployed rescuers also had no night vision equipment nor search lights.

“The Aquino government is just collecting taxes, its soldiers can only engage Filipinos in war — but they cannot wade through deep floodwaters to rescue us,” a victim of Bulacan flooding cried.

“Napocor saddled us with debts but inundated our villages in times like this,” another angry citizen said in a short message to the media. 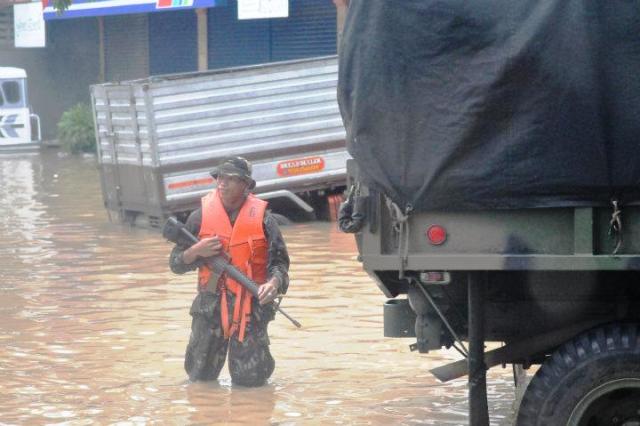 A battle-ready soldier wades into a disaster relief and rescue operation.(Photo by Bro. Martin Francisco / bulatlat.com)

Robredo admitted that the management of dam water levels may be “in need of review,” as he cited proposals to review protocols. He said that early release may be called for during rainy season. There is a “need to program well, consider the tidal cycle, consider those in the flood path who have not yet been evacuated,” Robredo said.

Dams usually hold on to higher water levels for hydroelectric energy and irrigation. In the aftermath of typhoon Pedring though, six dams simultaneously released big volumes of water in anticipation of another typhoon coming in.

The deep flooding that ravaged Nueva Ecija and reached up to the rooftops of single-storey houses in towns of Bulacan and Pampanga resulted from the dam releases and water runoff from Sierra Madre.

In towns such as Calumpit in Bulacan, rescuers failed at first to get to the people they were supposed to rescue because of lack of necessary equipment. Robredo admitted too that they had difficulty also in preparing evacuation centers, as schools and even the hospital in Hagonoy were submerged.

Early estimate of damage to crops in Central Luzon due to the massive flooding was put at P5.9-billion ($137 million). Nueva Ecija and Aurora farmers reportedly wept at their lost crops, which they had expected to harvest in two weeks if not for typhoon Pedring and the dam releases.

In Aurora, farmers requested the government for help, and to suspend the irrigation fees of P15 ($0.35) per kilo of palay.

Farmers asked the government for financial support, saying many of them had only borrowed the capital they used to plant the now damaged crops. They grieved that the disaster not only destroyed their expected harvest, it also pushed them into deeper debts.

Priests in Bulacan who opened their church as temporary evacuation sites passed on text messages asking for prayers, saying that if floodwaters and dam releases were not stopped, many will surely die.