Malacañang should stop VAT on toll in wake of Typhoon Pedring

After typhoon Pedring hit the country hard comes the Aquino government’s imposition of a 12 percent value-added tax on toll fees.

The Bagong Alyansang Makabayan (BAYAN) is demanding anew that Malacañang drops all its plans to impose the VAT on toll fees, saying that the public is still reeling from the devastation wrought by recent typhoon Pedring. The group said President Benigno Aquino III should exercise sensitivity to the Filipino people’ s plight and stop the scheduled imposition of the 12 percent VAT on toll fees scheduled on October 1.

Bayan made the call as it joined various people’s organizations in protesting the impending imposition of the regressive tax on the fees being charged in the country’s major toll roads, including the North Luzon Expressway (NLEX) and the South Luzon Expressway (SLEX).

“A large part of Luzon is reeling from the devastating effects of typhoon Pedring. Another typhoon has also entered the Philippines. The VAT on toll on October 1 will only add to the people’s misery. The Aquino government has the power not to push through with the October 1 implementation of the VAT on toll,” said Bayan secretary general Renato M. Reyes, Jr. 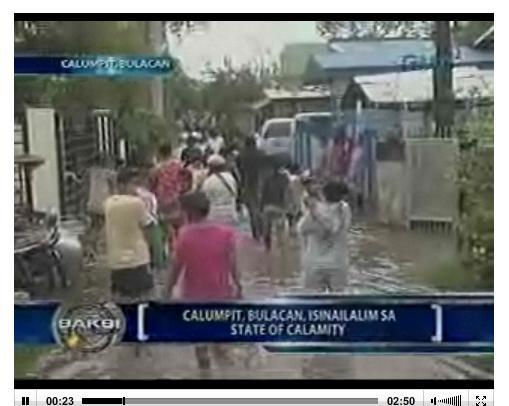 Bayan noted that the damage to crops and infrastructure caused by Pedring has been initially pegged at almost P1 billion ($232,558,139), affecting more than 35,300 families in Luzon. Some 33,890 tons of rice from 56,421 hectares in five regions were destroyed while damaged corn crops totaled 241 tons from 1,711 hectares in two regions. Most of the affected areas are in Cagayan Valley, Central Luzon, Calabarzon, and Bicol – regions that directly rely on the NLEX and SLEX to facilitate economic activities.

Reyes said Pedring gave an additional compelling reason for the Aquino administration to rethink the VAT on toll, which is expected to further exacerbate the ever increasing cost of living in the country.

“Even relief operations to the provinces will be affected by the VAT on toll fees,” Reyes said.

He also said imposing the VAT on tolls is counterproductive in the long run as it undermines domestic economic production. It pointed out that toll roads are a key infrastructure that helps facilitate the efficient movement of goods and people, including workers.

Toll rates have already significantly increased early this year, with SLEX fees jumping by as much as 270 percent.

“Malacañang does not need the VAT on toll fees. There is no compelling reason to rush the implementation of this proposal. The government, in fact, is already projected to earn windfall revenues arising from the VAT on oil to the tune of P70 billion ($1,627,906,977) this year. Yet its appetite for revenues squeezed from the people seems insatiable. VAT has become the most convenient form of raising revenues because it is not as difficult as other important revenue measures such as plugging tax leaks” Reyes said.

The group said Malacañang should not use the Supreme Court (SC) decision upholding the legitimacy of the VAT on toll in justifying the imposition of the regressive tax. In the name of public interest, Aquino can opt not to collect it if he wants to and no law will be violated.

In the meantime, the fisherfolk alliance Pambansang Lakas ng Kilusang Mamamalakaya ng Pilipinas (Pamalakaya) has called on Budget Secretary Florencio Abad to release the P 12 billion ($279,069,767) unspent funds previously set for the victims of typhoon Ondoy, which hit the country September 2009. The group said the unused funds should be utilized for relief and rehabilitation efforts for the victims of typhoon Pedring.

Pamalakaya chairman Fernando Hicap said Secretary Abad has no reason to hold the the P 12 billion ($279,069,767) “hostage,” saying the 100,000 people displaced by typhoon Pedring all over Luzon are in dire need of emergency relief assistance. He pointed out that of the P 12 billion Ondoy funds approved by Congress in 2009 for rehabilitation, the Department of Budget and Management (DBM) only released P 339 million ($788,372), or merely 3 percent of the total budget allocation in 2010.

He also challenged President Aquino to release his remaining P68 billion , audit-free pork barrel funds this year to fund the economic rehabilitation of farmers and fisherfolk whose livelihood was all but destroyed by typhoon Pedring.

“We challenge President Aquino to declare the current status of his P68 billion ($1,581,395,348) pork barrel the Liberal Party- dominated congress gave him last year. He should also declare a policy statement that the remaining funds will be released to help farmers and fishermen, the main economic casualties of the recent typhoon,” the Pamalakaya leader said.

In latest updates from the Citizens’ Disaster Response Center, it was revealed that typhoon Pedring, which entered the country last September 25, affected 35,273 families or 171, 570 persons.The typhoon, which made landfall in Isabela and Aurora, toppled trees, blocked major roads and damaged property.

At least 20 people were killed, 14 injured and 35 missing in the National Capital Region, and the provinces of La Union, Cagayan, Bulacan, Zambales, Pampanga, Rizal, Camarines Sur, Catanduanes and Ifugao.

In the meantime, the National Disaster Risk Reduction and Management Council pegged the initial cost of damages to 46 school buildings and crops at P100,264,840.63 ($2.3 million).

Based on information gathered by the CDRC from various media reports and reports from the NDCC,the local government of Obando in Bulacan placed the town under state of calamity after 11 barangays were submerged in flood waters. Local officials said the damage sustained by the coastal town was worse than what super typhoon Ondoy brought 2 years ago. Obando was submerged in neck-deep water Tuesday. Most areas in the town are still isolated due to impassable roads and flood waters that have yet to subside.

In the Cordillera region, communication lines bogged down in Kalinga, Ifugao, Mt. Province, Abra and in some areas of Benguet hampering immediate data gathering and coordination. To date power blackouts are still experienced in almost all of the provinces. A series of landslides along the major roads within the region were also monitored with Mt. Province and Apayao greatly affected.

The strong winds and heavy rainfall damaged agricultural lands in Kapangan, Tublay, and Kibungan. Vegetables ready for harvest were blown off, including rice fields in Lower Tabuk, Kalinga.

Fields were submerged by the overflow of the Chico River. Aside from rice and vegetables, corn producing areas were also affected. Flooding in low lying areas of Benguet such as La Trinidad, and Lowland Tabuk were also observed.

The CDRC and other people’s organizations under the Bagong Alyansang Makabayan as well as progressive partylist groups have begun relief campaigns to assist the affected families. Bayan, Migrante, Pamalakaya, Kabataan Party-list, Anakpawis Party-list and Gabriela have already begun their respective relief operations.