Support for the peace talks between the Government of the Philippines (GPH) and the National Democratic Front of the Philippines (NDFP) continues to pour in as various sectors of Philippine society including religious formations expressed their stand that both parties return to the negotiating table and proceed with the next substantive agenda in the talks.

Earlier last week, a forum led by religious formations in Western Mindanao declared the “Mindanao people’s support to sustained negotiations between the Aquino government and the NDFP to end poverty and landlessness.” In a forum led by Diocese of Dipolog Bishop Jose Manguiran, Bishops Osias Jaim and Bishop Melzar Labuntog of the United Church of Christ in the Philippines (UCCP), and Bishops Antonio Ablon and Noel Lorente of the Iglesia Filipina Independiente (IFI), representatives of both the GPH and the NDFP were called upon to listen to the sentiments of the broad multisectoral groups composed of close to 300 lay leaders, farmers, women, youth, and academics. 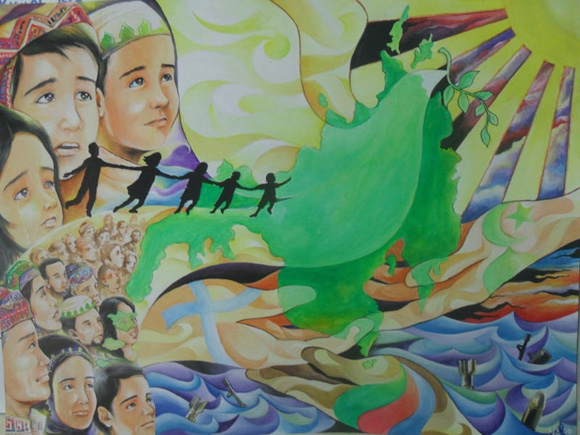 The activity was formally titled Western Mindanao Peace Forum and it was held in Ozamiz City. It also served as the launch for the regional peace movement “Advocates for Peace “or AdPeace.

AdPeace convener Bishop Jaim in his message said the peace process is “ A life and death concern for the people,” and that the talks were “not an abstract matter but something that addresses our basic needs and aspirations.”

“This is about us, our families, and our children,” he said.

Guest speaker former Bayan Muna congressman Satur Ocampo, an acknowledged authority and commentator on the peace process emphasized that the armed conflict that continues to rage in the country is bred by widespread landlessness. He expressed hopes that the current impasse in the talks will have been overcome with the insistence of the third party facilitator role of the Royal Norwegian Government whose envoy arrived in the country last week to mediate between the GPH and NDFP peace panels.

Ocampo led the the NDFP peace panel in the 1986 peace talks with the former Corazon Aquino government.

For her part, human rights lawyer Beverly Musni, convener of Sowing the Seeds of Peace, a Mindanao-wide network with which AdPeace is affiliated, pointed out that the people’s current problems with high prices of oil and basic commodities, poor social services and, lack of education are a result of how the economic system is structured to favor foreign powers and the local elite.

She said these issues should be addressed at the most basic level and that the substantive agenda of social and economic reforms in the peace talks can “provide the opportunity for the people to assert our demands for a more equitable distribution of wealth and resources.”

Bishop Manguiran, in the meantime, said the Muslim-Christian conflict in Mindanao is contrived to paint a picture of chaos in the island in order to justify the deployment of security forces from the Armed Forces and private companies. He said these often end up guarding mining investments across Mindanao. He reiterated his stance that peace can only come about when “the people exercise sovereignty over their environment and natural resources.”

Peoples organizations have also stated their reasons for supporting the peace talks.

Kalikasan People’s Network for the Environment (Kalikasan PNE) said the settlement and resolution of centuries-old problems of poverty, injustice and environmental degradation can come with the peace talks because it is “an avenue where both parties can explore common points and immediate action toward genuine and lasting peace in the country.”

“The GPH and NDFP are to be commended in discussing how environmental issues can be resolved and advocating for the conservation and preservation of the the country’s ecology,” the group said.

The environmental group said GPH representative Ednar Dayanghirang said in a previously held forum that one of the main concerns of the Aquino administration is how to protect the environment. Dayanhirang said the GPH is pushing for a balanced and healthful ecology for the benefit of the Philippines.

The NDFP, in the meantime, has already declared that it is determined to pursue a comprehensive and balanced national policy for the country’s natural resources and their all-round exploration, conservation and development, while at the same time, secure and improve a healthy natural environment.

This motion was included in a 10-point concise peace proposal the NDFP presented to President Benigno Aquino III earlier this year in January.

Some of the other action points included in NDFP proposal concerning the environment are on the provision of adequate resources and savings for the realization of healthy environment; an end to the plunder of natural resources; and the prevention of the entry and stationing of weapons of mass destruction.

Kalikasan-PNE also cited another proposal put forward by NDFP consultant Rafael Baylosis that the NDFP’s armed wing, the New People’s Army can be designated as forest protectors against illegal loggers, land grabbers, and other environmental criminals. The group said Baylosis’ proposal seems to hold water since most of the remaining forests and biodiversity rich-areas like the Sierra Madre Mountain and Higaonon Forest in Mindanao, are areas where NPA presence is strongly felt.

Kalikasan PNE believes the proposal of the NDFP to be just, acceptable, and logical, not only to the warring parties but to the Filipino people as a whole. If the GPH takes into account the proposals of the NDFP as well as the suggestions from civil society and sectoral groups on how the parties can work together in environmental protection as well as in other issues, a peaceful resolution to the country’s problems might be achieved,” said Kalikasan-PNE coordinator Clemente Bautista.

“We cannot think of any reason how the the Aquino administration and the GPH would reject such proposals and impede a long-term truce and an alliance between parties in working toward genuine peace and development which the people have long clamored for.”

The Kilusang Magbubukid ng Pilipinas (KMP) also welcomed the talks and said it expects both parties to discuss issues concerning genuine agrarian reform if and when the talks resume in October.

Ramos said social and economic reforms is the meat of the peace process because it aims to address the central problem of landlessness of the Filipino peasantry that is at the core of the armed conflict.

“Genuine agrarian reform program is the heart and soul of the NDFP’s draft on socio-economic reforms and its proposal for a comprehensive agreement on the same,” he said.

Ramos explained that under the Carp and the Carper, farmers are obligated to pay for the land that will be given them.

“Eventually, farmers who cannot afford to pay amortization end up losing the land. This practice has led to the re-concentration of land to big landlords. Worst, both these fake agrarian reform schemes are designed to strengthen the monopoly and control of big landlords over vast tracts of lands,” he said.

The peasant leader said the October talks should also address high-profile agrarian disputes like the ones involving Hacienda Luisita in Tarlac, Hacienda Looc in Batangas, and the haciendas controlled by tycoon and presidential uncle Eduardo “Danding” Cojuangco among others.

Hacienda Luisita is the more than 6,000-hectare estate owned by President Aquino’s family, while Hacienda Looc is the 8,650 hectare estate in Nasugbu, Batangas now being converted into the Hamilo Coast project by SM Land owned by taipan Henry Sy.

Other components of the NDFP’s land reform program includes ending exploitative practices such as usury, promoting cooperativization, providing comprehensive support services such as irrigation and post-harvest facilities and food self-sufficiency.
“Given this, it’s not surprising why farmers very much look forward to the resumption of the formal talks in October. Their land and livelihood, their interests and welfare are the priority issue of the talks,” Ramos said.