Army intelligence agent, one of the abductors of two UP students – witness

Witness Wilfred Ramos said Staff Sgt. Edgardo Osorio was the one who hogtied him and his father the day the two students and Merino were taken by some 20 armed men.

MANILA – Finally, the mysterious soldier who has been implicated by a witness in the abduction of the two University of the Philippines (UP) students has been named.

Osorio, who attended the hearing on July 19, was identified by Wilfred Ramos, one of the witnesses, as one of those who abducted Karen Empeño, Sherlyn Cadapan and Manuel Merino on June 26, 2006. In his supplemental affidavit, Ramos said the then unidentified soldier was the one who hogtied him and his father the day the two students and Merino were taken by some 20 armed men.

Erlinda Capadan and Concepcion Empeño, mothers of the two missing students, filed their amended complaint, naming Osorio as one of the accused in the criminal complaint they filed against Palparan and several other military officials.

Edre Olalia, one of the lawyers for the complainants, accepted the documents provided by Yambing but manifested that they are not admitting the veracity of all the information indicated there except the name and serial number of Osorio. 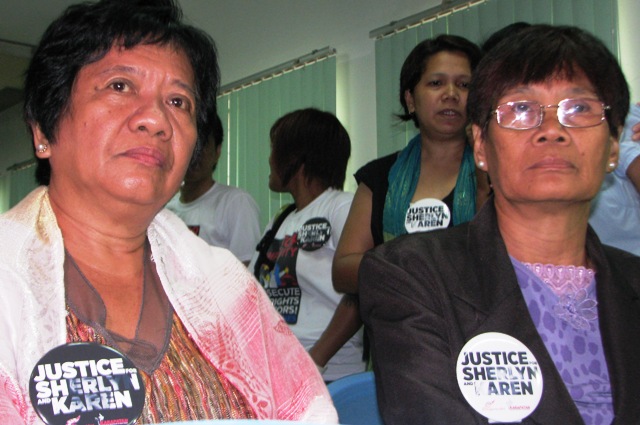 Based on the documents, Osorio was at the Army Personnel Management Center (APMC) from May 2005 to July 2006 and was sent as a member of the Philippine contingent to Liberia from July 2006 to March 2007. The abduction took place on June 26, 2006 in Hagonoy, Bulacan.

“It is highly probable that there is an attempt to make it appear that Osorio did not take part in the abduction,” Olalia said, adding that assuming that the assignments are correct, the fact does not exclude that Osorio was probably given a special order.

Mrs. Empeño echoed the same view. “He [Osorio] may have been assigned to a different unit but the higher-ups could always give him a special assignment.” Mrs. Empeño stood by Ramos’s statement.
Empeño said she was disappointed with the Provost Marshal. “He promised to help us, now this.”

Olalia added that even if Osorio was indeed sent to Liberia, he noted that Palparan, too, was sent to Iraq at the time when the international community condemned extrajudicial killings in the Philippines.

“It is probable that this person [Osorio] was pulled off after the incident,” Olalia said.

Speaking to reporters after today’s hearing, Palparan decried “persecution” and branded the move of the complainants as “fishing expedition.” Palparan denied he had met Osorio while he was in active service. He said Osorio only provided security to him when the hearings at the DOJ started.

“It is so easy to deny. Why would you get a security guard whom you did not know?” Mrs. Cadapan said in reaction to Palparan’s statement.

“That is not true,” Ramos who attended today’s hearing said. “Why would I lie? What would I get from lying? In fact, my life has been at risk because of this,” Ramos said in Filipino.

A few days before the third hearing, Ramos said, he received text messages from an anonymous sender. He was barraged with invectives and was warned against testifying in the court. Ramos also said he noticed men tailing him from the Karapatan office to his home in Bulacan.

Reacting to Palparan’s statement that he was being persecuted, Olalia, secretary general of the National Union of Peoples’ Lawyers (NUPL), said: “Pity him. Whether he was in Mindoro or Eastern Visayas or Central Luzon, Palparan left a trail of blood. Saying that those around him are being harassed is the height of arrogance and brazen impunity.”

After five years of searching, both mothers remain hopeful.

“I see a ray of hope in these hearings,” Mrs. Empeño said.

Mrs. Cadapan said she still sends text messages to one of Sherlyn’s cellphone numbers. “Yesterday, I texted her ‘We miss you for several years already.‘”

Olalia manifested that they will also file an application to place Osorio under the DOJ watch list.

Osorio was given until August 31 to submit his counter-affidavit, the schedule of the next hearing.