MANILA – Since the labor department admitted early this year, in the face of a growing call for a substantial wage hike, that indeed there were supervening events warranting wage hikes, less than half (or eight out of 17) of the country’s regional wage boards have issued new wage orders. It granted hikes amounting to as low as P5 ($0.12), with the “highest” at P22 ($0.53) in the National Capital Region, which all labor groups in the country denounced as too low to be of real help amid the crisis. Some wage orders even came in two tranches, for example the P15 ($0.36) COLA granted last June in Region 8, P5 would only be given beginning next month.

In Mactan and Cebu in the Visayas where three export processing zones are located, and where 210 companies operate and employ 60,000 workers, a workers alliance said last week that the employers there had been too slow to comply with their region’s wage order. Myrna Berdin, coordinator of Unity for Workers Rights (U4), an alliance of workers inside the Mactan Export Processing Zone, said the export processing zone employers have threatened their workers that if they pressed for wage hikes, companies would incur losses, cease operations and layoff its workers.

“The wage order granted is already pitifully small but the workers had to fight for its implementation,” Berdin told bulatlat.com, adding that “it is patently obvious that these mostly foreign-controlled companies have been reaping profits and not incurring losses at all.
Berdin said it didn’t help that even the labor department in their region has been telling the workers to wait awhile, because the companies are supposedly still incurring losses. 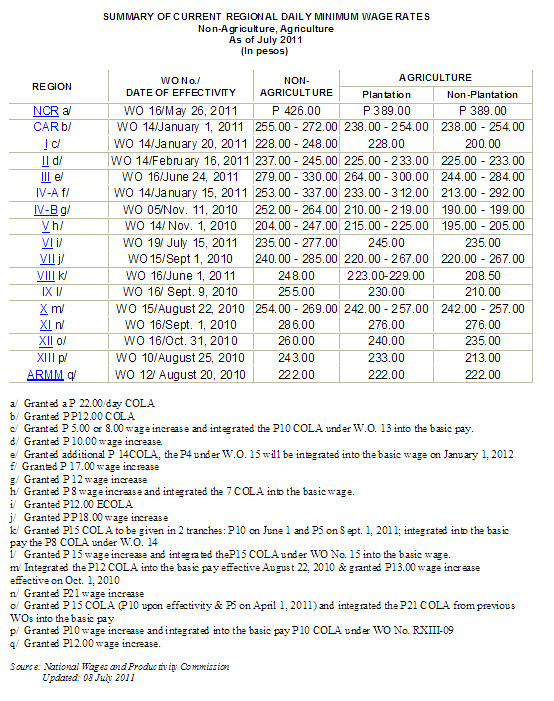 Cebu workers are now mandated to receive P235-277 ($5.63 to $6.63) as daily minimum wage in non-agricultural sectors. Its agricultural workers, meanwhile, are entitled to a P235-245 ($5.63 to $5.87) minimum pay. Their wage rates are not far from the rates prevailing in other regions in the Philippines, as it is only in the National Capital Region where the minimum wage rate has breached the P400 ($9.58) level.

“We wonder about the wage difference,” Berdin said. Aside from the fact that even the highest minimum wage rate in the country is less than half of the estimated daily cost of living, Berdin said, the workers in Cebu have the same need for food per day. She noted that in Cebu, prices are also high.

“Oil prices are in fact more higher here in Cebu than in Metro Manila. The minimum fare here has increased from P6.50 to P7.50 ($0.16 to $0.18) We can no longer buy a kilo of rice that is worth around P30 ($0.72). The increasing prices of basic commodities are burning holes in our pockets,” she said.

This week, in the face of unabated price hikes, labor secretary Rosalinda Baldoz announced once again that the wage boards are tasked to study the need for granting new wage hikes.

But to a growing number of workers in the Philippines, the regional wage boards should have been dismantled long ago. “That’s been our demand, too, from here,” Berdin said, “because the wage boards have done nothing for the workers’ wages, and even if they come out with insufficient wage orders, these are not being seriously enforced.”

In light of this, the Unity for Workers Rights (U4) in Cebu has urged the Aquino administration to advise Congress “to pass the bill that will provide a P125 across-the-board wage hike to Filipino workers. This is very much needed by workers all over the country especially because wage hikes have become very difficult to pass with the regional wage boards.”

Advancing P125 and union rights with the help of Church people

Some bishops, other church leaders, workers and labor advocates have announced recently they are coming together to demand for the legislation of a substantial wage hike.

The Church People-Workers’ Solidarity (CWS), a group convened by bishops, priests, other church leaders, workers, and labor advocates, said in a statement, they are “apprehensive that the condition of workers and their families who are struggling to survive with their meager income will deteriorate further with the escalating price of commodities and cost of utilities.”

“A substantial wage hike is an immediate relief for majority of our brothers and sisters suffering from hunger and misery amid the spiraling prices of basic commodities,” said CWS convener and Jaro Auxiliary Bishop Gerardo Alminaza.

Bishop Alminaza also criticized the P22 Cost of Living Allowance granted to workers in Metro Manila as “obviously not enough to uplift the living conditions of our brothers and sisters to decent levels.” The bishop called on President Aquino “to push Congress for the legislation of a just wage hike for the workers across the country.”

Next month, the CWS said church leaders and workers nationwide will gather in a national conference to be held in Cebu City.
Quoting the Second Plenary Council of the Philippines (PCP II), Bishop Alminaza said, “The principles of human work mandate among other things . . . just remuneration for work that is sufficient to establish or properly maintain a family and to provide security for the future . . . (PCP II, 319)”.