Aquino’s Sona: All for show, no substance – Bayan

There were many important things to the Filipino people that were missing in Aquino’s Sona, most speakers in the Sona rally said.

“Wang-wang Sona: too much noise, too little substance” – KMU

Sona 2011 has little to report, less to look forward to – Ibon

MANILA – The second State of the Nation Address (Sona) delivered by President Benigno “Noynoy” Aquino yesterday was buttressed in Metro Manila by a deployment of 7,000 policemen and 700 to 1,000 soldiers from the Philippine Navy and Philippine Army, plus some armored carriers in case it would be needed. These were to counter the mass of protesters who had sought permission earlier to conduct a “true Sona” rally near the Batasan grounds.

Aquino has reportedly had a hand in drafting his Sona speech, which went through seven revisions by morning of his scheduled Sona. It was hyped to talk of “only the simple truth, without lies, in Tagalog,” as one of his communication secretaries, Sonny Coloma, promised on radio. 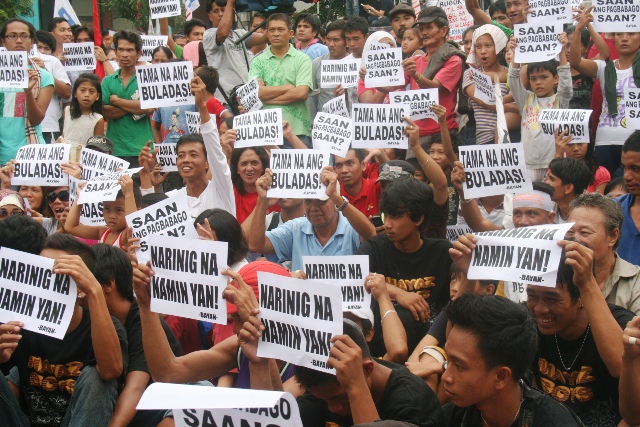 On the day of the Sona, President Aquino reportedly woke up early to prepare, and for only the third time since he was sworn in as president, he had called for a Cabinet meeting.

But despite the numerous times Aquino had revised his Sona speech and conducted a cabinet meeting, protesters still found his Sona greatly wanting in substance. After a year of Aquino’s rule, progressive people’s organizations declared that they have seen and suffered enough from the policies Aquino just continued from where Arroyo left off. Their effigy of Aquino is that of a “smelly rotten egg”.

No change under Aquino

Aquino’s Sona was denounced as empty, for the Filipino masses at least, by leaders and members of progressive organizations that gathered for their main protest rally in Quezon City. More Sona protests airing “the true Sona” were simultaneously held in many other cities outside of Metro Manila. On the other hand, a single pro-Aquino rally was held and allowed to hold a program in front of the Batasan grounds.

“Aquino’s Sona may be better off entitled as State of the Wang-Wang,” Renato Reyes Jr., secretary-general of Bayan, commented, citing the repeated times the word wang-wang was mentioned in Aquino’s speech.

In fact, Aquino mentioned the word wang-wang 18 times in an hour-long speech marked by 79 applauses, 25 incidences of Aquino stuttering on his speech, and at least four coughing fits. In Commonwealth Avenue, Aquino’s stuttering and coughing were booed by protesters who pointed to it as signs of lying.

There were many important things to the Filipino people that were missing in Aquino’s Sona, most speakers in the Sona rally said. Reyes, for one, said Aquino’s Sona did not mention at all the issue of wage hike and peace negotiations, or even jobs generation.

George San Mateo, secretary-general of Piston, said Aquino did not mention at all the issue of oil deregulation and correcting the unmitigated overpricing of oil cartel in the Philippines. Neither did Aquino tackle the impact of his government’s Pantawid Pasada “stop-gap measure for the eroded earnings of drivers,” said San Mateo.

In fact, Aquino did not mention as well the issue of his government’s EVAT windfall on oil, even if he boasted about more than a hundred companies about to do oil and mineral exploration in the country.

Lito Bais, president of ULWU in Hacienda Luisita in Tarlac, attested to the failure of land reform in the country as he shared the still unresolved struggle for land in President Aquino’s family-owned hacienda in the province. Bais called on farmers and the Filipinos in general to support their Bungkalan-style of implementing land reform by themselves, “because nothing about land reform can be expected from the government” and it is “up to the farmers and the people to help themselves.”

Aquino’s positive is negative to the people (Same puppetry, mendicancy and state fascism)

Even the achievements cited by Aquino in his Sona, with statistics presented as seeming proof, only proved to progressive organizations the sufferings they would endure for “the long haul” under Aquino, as Marie Hilao-Enriquez of Karapatan put it.

While Aquino boasted in his Sona the increased credit-worthiness of the Philippines under his administration, this is only from the “investors’ point of view, and not of our ordinary fellow citizens,” said Reyes of Bayan. Reyes charged that this improved creditworthiness has hardly benefited the poor majority, who may even suffer from it later in the form of increased foreign debts and public-private projects.

A country’s improved credit-worthiness tends to bring down interest rates when it borrows money, encouraging the government to borrow more, and encouraging investors as well to come in with borrowed capital.

President Aquino also boasted about how his administration has brought down the number of hungry Filipinos by a million due to conditional cash transfers – a statistic which Aquino said would benefit from the saved P23billion ($542m) due to improved credit-worthiness. But protesters said Aquino, at the same time, evaded the issue of greater foreign debts, and the fact that most of the funds his administration is using for conditional cash transfers are actually funded from foreign debts which the Filipinos will eventually start paying soon.

Another boasted achievement that made it to Aquino’s Sona was the 4,000 housing units constructed for the police and soldiers. Reyes of Bayan asked how come the rest of the people’s need for housing was not considered. Lito Ustarez, vice-president of KMU, said that since Aquino took power, as much as 14 demolitions, many were violent, had been implemented. How would the affected people’s housing needs be ensured, Ustarez asked, if Aquino only looks at the needs of his soldiers and police?

In fact, Lana Linaban of Gabriela even criticized the Aquino government’s “corrupt-ridden so-called housing program.” She said that most of these housing programs are being run like a business, and so it is after profit, which, in turn, further takes housing away from the reach of ordinary low income earning Filipinos.

Aquino extolled how he had brought down the number of unemployed, but aside from not tackling even a broad sketch of his administration’s jobs generation strategy, as Reyes of Bayan had pointed out, Aquino was also only doing an Arroyo, said the protesters. In truth, approximately more than 11million Filipinos are jobless, but their number seems to have decreased because Aquino has done an Arroyo-like tinkering with statistics to exclude in the counting of unemployed those who, for various reasons, for example desperation, and scant job openings, had stopped seeking jobs.

Aquino’s Sona included a boast about Filipinos now being able to choose between working domestically or abroad. But Garry Martinez of Migrante International belied it, citing statistics too, such as the 4,040 Filipinos forced to leave for work abroad everyday, despite the tragic fact that six to 10 of them are coming back home as corpses everyday. Martinez also added that human trafficking continues to victimize Filipinos, despite the Aquino boasts that it had been licked. Martinez also said that some 7,000 OFWs are in jail in various countries, those with pending cases increased under Aquino to 122 from Arroyo’s last year of 108, and more are getting saddled with legal cases that the Aquino government cannot decisively act on because Aquino has slashed the budget for legal assistance of the OFWs.

Even Aquino’s boast of starting to modernize the Armed Forces of the Philippines and starting to stand up to neighboring bullies like China over the Spratlys dispute earned him the ire and scorn of progressive peoples’ groups. “Is the Philippines really learning now to assert its sovereignty?” asked Reyes of Bayan to loud boos from the audience. Reyes said that in the case of Spratlys, this sovereignty is apparently “not Philippine sovereignty vis-a-vis the US, nor about holding the US accountable to its violations of its Visiting Forces Agreement with the Philippines.”

Aquino’s vaunted energy projects were also criticized by spokespersons of indigenous peoples groups and advocates for the environment and science and technology. Saying Aquino has opened the country’s natural resources to multinational companies’ plunder, Pia Malayao of Kamp and Marge Pamintuan of Kalikasan said it can only continue degrading the environment and bloodily displacing the indigenous peoples from their ancestral domain. Ganni Tapang of Agham said the PPPs that seek to exploit the Philippines’ resources and sources of energies for the profit-taking of foreign companies not only displace the communities affected by it, and destroy the environment, it also stunt the country’s economy and industries.

Who has selective perception?

In his Sona, Aquino claimed the people remains as his boss. But he swiped at the progressive organizations protesting during his Sona, reportedly saying these critics are “too negative” and they only see the ugly side of things.

But the real question there is why Aquino is blind, mute and deaf toward these “many real, negative things,” shot back Reyes of Bayan who reminded Aquino that they are part of his vaunted “boss.”

The progressive people’s Sona concluded that there is nothing in the sphere of “change” that the majority of Filipino people can expect from the Aquino administration. “You’re all for boasting, yet you have done nothing,” Ferdinand Gaite, president of government employee organization COURAGE, said like a chant. Gaite urged the public and private sector workers to continue persevering in their “genuine unionism” and in participating in the people’s anti-imperialist movement.

Aquino’s once oft-repeated matuwid na daan (righteous path) is actually a killer highway, said Lana Linaban of Gabriela, after noting the unabated price hikes, wage erosion, joblessness, economic backwardness, etc., that are only some of Aquino’s “achievements.” She called on the people to “break this Aquino rotten egg before its stench kills all of us.”