Comparing the local oil prices to that in other countries in the past years, Piston said the local pump prices have risen far more than the amount necessitated by price movements abroad and the peso-dollar exchange rate. The transport group continues to accuse the oil companies of overpricing oil products by “an average at least of P7.50 ($0.17) per liter.”

MANILA – A day after public transport drivers from Southern Tagalog drove a caravan to Makati City in Metro Manila and protested the latest rounds of price hikes at the headquarters of the three biggest oil companies operating in the Philippines, the Manila chapters of PISTON also held a protest caravan targeting “the biggest and the fastest to raise rates” among the so-called Big Three.

The Makati City headquarters of the local subsidiary of multinational Royal Dutch Shell, the Pilipinas Shell, was the destination Tuesday of the jeepney and FX taxi drivers who “sacrificed their day’s earnings as drivers” to join the protest caravan against oil price hikes. Their caravan began at the Quezon Memorial Circle in Quezon City, passed by Quezon Avenue, turned left at Edsa, then right at Buendia and then left again to Paseo de Roxas in Makati City toward the headquarters of Pilipinas Shell.

Pilipinas Shell had been the first to announce a new round of increases in oil products, said Modesto Floranda, president of Piston chapter in the National Capital Region. The price of diesel was increased midnight of Tuesday, led by Shell, by at least P1.10 ($0.03) per liter while gasoline was increased by P0.30. 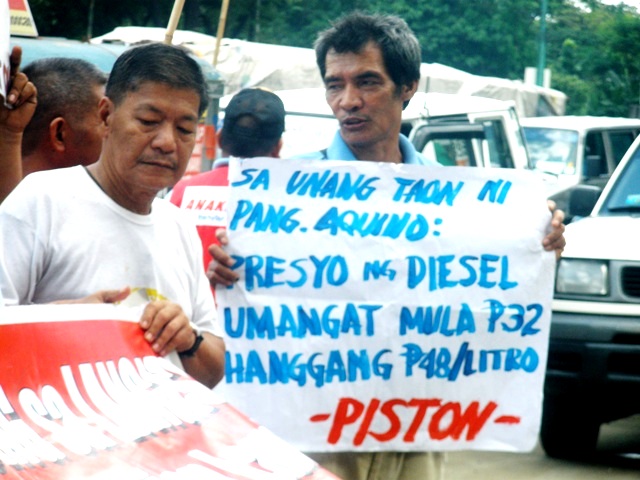 This latest round of price hikes raised the diesel prices from P32 ($0.74) per liter at the start of the administration of President Benigno “Noynoy” Aquino to as much as P48 ($1.11) today, a year after he took power and promised change in the lives of ordinary Filipinos. Drivers complained that oil price hikes have drastically reduced their whole day’s earnings.

According to Piston, the increases since Aquino took power caused jeepney drivers to lose P480 ($11.15) per day in using up to 30liters of diesel, while tricycle drivers lose up to P64 ($1.49) per day. While the government turns down petitions for fare hikes, it is the drivers who are thus being forced to subsidize the cost of the oil price hikes. Drivers particularly those from Piston are urging the public more to support their calls for an oil price rollback and the scrapping of the oil deregulation law, the law they blamed for unmitigated oil overpricing.

Although the Aquino government has freely allowed oil companies to raise pump prices while they barely allowed fare hikes, the public is still not spared from the impact of oil price hikes. Piston noted in their statement that prices of goods such as all foodstuff, rice, fertilizers and electricity— goods that consume oil in transportation or production or both— have also increased.

“The country’s drivers are furious over these oil price hikes,” Floranda said, adding that “When oil companies raise prices they raised it big and quick. When they roll back prices, they do so extremely slowly and in pitifully small amounts.”

Excessive profits at the expense of the poor

Piston belied the excuses of the oil companies for the oil price hikes. “It is not true that it is simply because local pump prices are dependent on prices in the world market,” said Piston in a statement. Comparing the local oil prices to that in other countries in the past years, Piston said they discovered that the local pump prices have risen far more than the amount necessitated by price movements abroad and the peso-dollar exchange rate. The transport group continues to accuse the oil companies of overpricing oil products by “an average at least of P7.50 ($0.17) per liter.” 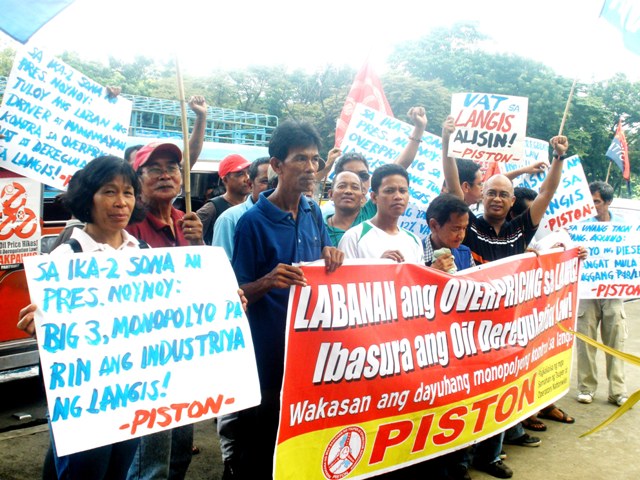 Piston members preparing to leave for a protest caravan to headquarters of oil companies on Jul 19. (Photos by Marya Salamat / bulatlat.com) 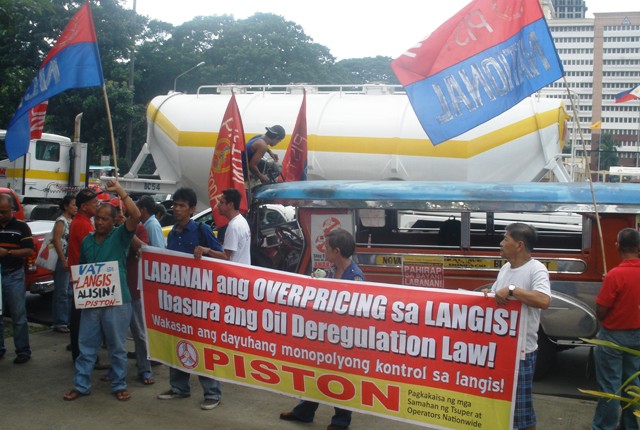 George San Mateo, secretary-general of Piston, charged that the Aquino government is not that interested in holding back the greed for profits of Shell, Caltex and Petron through overpricing. This, he explained, is because the government takes a bigger slice of the profits with the higher oil prices, through the 12-percent value added tax on oil. PISTON and other progressive peoples’ organizations have a long-standing demand for scrapping the VAT on oil products. With the spiking prices of oil products, Piston said, since 2006, the government has been taking an average of P48-billion yearly from the VAT on oil.

Piston said the billions worth of total VAT on oil are one of the big reasons why the Aquino government could not reverse the Oil Deregulation Law that gives the oil companies license to freely tinker with oil prices. San Mateo criticized the very meager “aid” extended by the Aquino government to Filipinos at the height of a strong nationwide protest against the oil deregulation law last March 31. The protesters were calling for a suspension of the VAT while reviewing the oil deregulation law.

Nothing has changed under Aquino, said San Mateo. He said drivers fear that at the rate the Aquino government is giving free rein to oil price increases, “even doing the role of spokesperson for the oil companies,” pump prices may again peak at P51 ($1.18) per liter of diesel and P61 ($1.42) per liter of gasoline. This happened under former president Arroyo in 2008. “Worse, the price hikes may even exceed that,” San Mateo warned.

He urged the country’s drivers to support PISTON’s protests against the oil price hikes and the oil deregulation law. “We urge everybody to join us in airing the real state of the nation on Jul 25,” San Mateo said.