All the efforts of the farmworkers are not being ignored by the Cojuangcos. According to Bais, as they continue with the bungkalan, the supervisory employees of Hacienda Luisita have also started mobilizing their forces to go around the hacienda’s seven villages and trumpet the need for the referendum.

“Our organizations led by Ulwu and Ambala are campaigning for a boycott and informing all farmworkers and their families why the referendum is a trap meant to divide us and save the Cojuangcos. We have monitored the activities of the supervisors and discovered that they have been going around the communities bribing residents to support the referendum,” said Bais.

Bais said farmworkers in Hacienda Luisita are all too familiar with how the Cojuancos operate.

“First they use their money for bribery; then they resort to threats and harassment. If neither tactic works, they resort to violence: none of us have forgotten what happened in November 16, 2004. The Hacienda Luisita massacre is a nightmare that none of us would ever forget much less forgive,” he said.

According to Bais, residents are being bribed with P5,000 (US$116.28) to support the referendum, and paid P100 (US$2.33) every time they attend press conferences and public gatherings and declare their support for it.

“Can anyone really expect the Cojuangcos to come clean with their real agenda for the referendum? No. Is there any doubt that any referendum that will be done in Hacienda Luisita will be rigged? None. They have to resort to bribery and threats just to get their way; this says much about how they really treat the farmworkers and how very little, if at all, they care about the welfare of their so-called ‘stockholders,'” he said.

This coming July 22, an inter-faith rally will be held in Manila in support of the continuing struggle of the Hacienda Luisita farmworkers. Groups allied with the Kilusang Mabubukid ng Pilipinas and Anakpawis Party-list will gather at the Plaza Olivia Salamanca at the corner of T. Kalaw and Taft Avenues at 1p.m. and from there march toward the Supreme Court by 2p.m. where the inter-faith rally will be held. Afterwards, the participants will proceed to Liwasang Bonifacio for the concluding program. 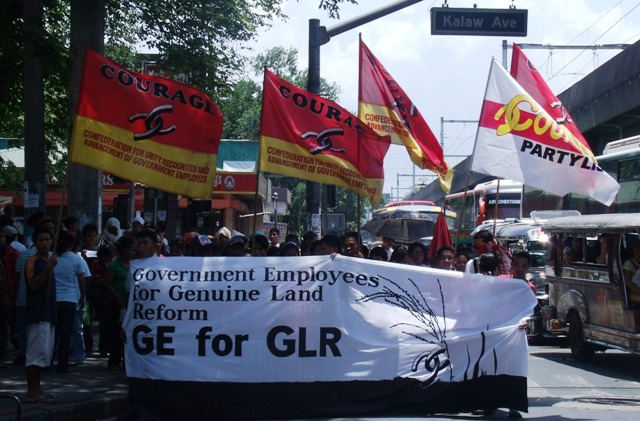 The Government Employees for Genuine Land Reform (GE4GLR) in the meantime is among the first groups to declare support for the activity. The group led a rally at the Supreme Court last July 18, and pledged to continue its support for the farmworkers.

“As public servants, we believe that the continuing struggle of farmers for land, justice and genuine land reform concerns us as well. The Supreme Courts decision in calling for an easily-manipulated referendum instead of direct land distribution is a travesty of justice. The absence of genuine land reform is a glaring example of how the government deliberately abandons its mandate to provide social services and support to the basic sectors of society, particularly those who work to feed the nation. It is ironic that a President who prides himself on pursuing a ‘straight path’ continues to deny the valid demand for agrarian reform even as it has been proven time and again that social justice through genuine land reform is the key to lasting peace and development in the country,” said GE4GLR spokesperson Mar Araba.

Lawyer for the Hacienda Luisita farmworkers and peasant rights activist Jobert Pahilga also announced that he will file a motion for reconsideration on July 21.