You Are Here: Home → 2011 → July → 15 → Under Aquino, Philippine Heart Center further hardens its heart against the poor

Under Aquino, Philippine Heart Center further hardens its heart against the poor

The years of slashed budgets have resulted in the severely reduced servicing of indigent patients, the reduced benefits of the hospital employees, and, as health workers fear, the risk of final or formal privatization of the Philippine Heart Center.

MANILA – Every year, health workers have been asking the government for an increased budget for public hospitals, but to no avail. “President Benigno ‘Noynoy’ Aquino III’s response was a huge slash,” lamented Bonifacio Carmona, spokesperson of the Philippine Heart Center Employees’ Association.

The Aquino government slashed the budget for maintenance and other operating expenses of most public hospitals, with the Philippine Heart Center suffering the biggest cut – from P531 million (US$ 12.3m) last year to P122 million (US$2.8m) this year, the Alliance of Health Workers (AHW) said in a statement last week. “The slash exerts a huge impact not only to the hospital employees but also to its patients, especially the poor,” Carmona told bulatlat.com. The public hospital’s employees’ association observed its 23rd anniversary last week with deep apprehension over the present predicament and future of the Philippine Heart Center and the fulfillment of its original mandate. 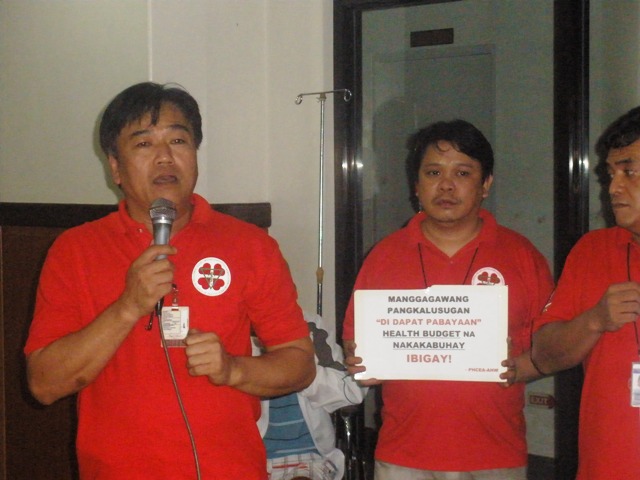 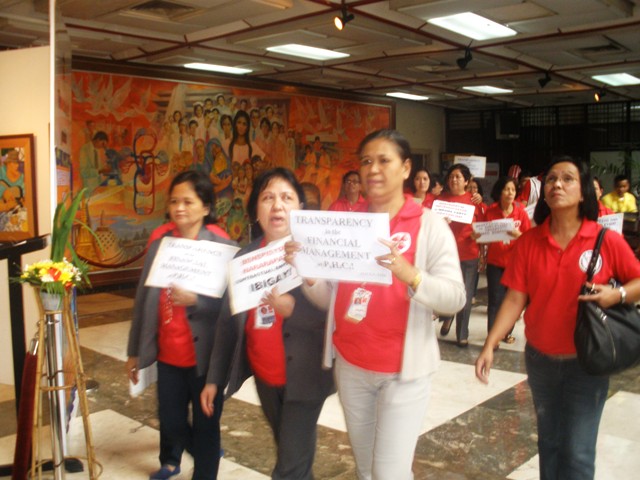 Working at the Philippine Heart Center for 23 years now, Carmona said he and his fellow employees are not “mere employees.” He told of feeling sadness for having to witness the yearly dwindling of what used to be a long, snaking line of patients availing of free checkup and relatively lower priced treatment. The line used to form as early as four in the morning, Carmona recalled. It began to shorten during the Ramos administration and the implementation of the Health Sector Reform Agenda. The health workers blame the bit by bit privatization of the country’s public hospitals, as public hospitals are increasingly forced to impose progressively higher fees, impose fees on what used to be free, and slash their budget for indigent or “social service” patients.

These days, health workers said, the recently signed Government-Owned and Controlled Corporation Governance Act or Republic Act 10149 will further worsen all that as it further paves the way for privatizing the GOCC hospitals.

“Very few of them are now waiting in line,” said Carmona of the “service patients” or poor patients, explaining that some had died while waiting to gather enough money for their treatment or operation, while those who had no hope of ever saving up for the services just did not bother coming or waiting in line anymore.

These days, the only thing that is free in public hospitals like the Philippine Heart Center is waiting in line, said Carmona. 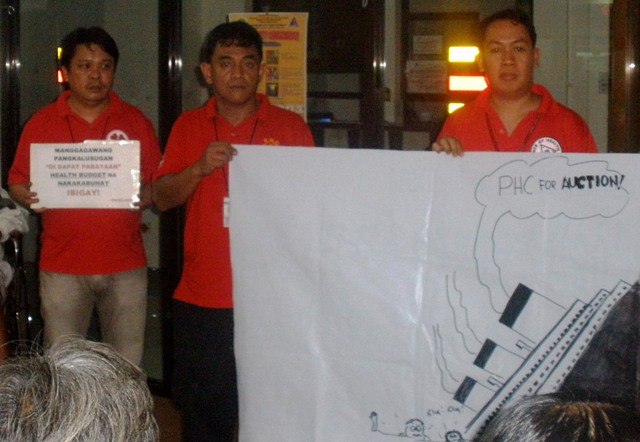 Public hospital likened to a “sinking ship” if the government did not increase its budget. (Photo by Marya Salamat / bulatlat.com)

Writing in collaboration with cardiologists, hospital employees and surgeon friends, Dr Madlang-awa shared what appeared like an ongoing struggle involving on one side, the Philippine Heart Center’s health professionals and employees who are pushing for the center’s original mandate of servicing charity patients, and on the other side, the new hospital executives whose thrust is to make the hospital profitable to enable it to pay its debts.

He denied that the Philippine Heart Center is no longer servicing charity patients, but the figures he cited as example were April 2010 figures, before a hospital memo, issued on December 7, 2010, ordering the hospital to forgo “elective procedures on service cases” (charity patients), and to do “only emergency procedures” where patients “will have to shoulder the cost of the procedure and materials.”