Environmental activists expressed dismay and outrage over the decision of the Department of Justice (DOJ) to clear former Palawan ex-governor Joel Reyes in case concerning the January 24, 2011 killing of Dr. Gerry Ortega.

Marjorie Pamintuan, convenor of Task Force Justice for Environmental Defenders said that the DOJ was at the helm of a cover-up to allow the masterminds of Ortega’s murder to get away with murder.

Ortega was killed by hired assassin Marlon Recamata, who was immediately captured by the local police. The environmental advocate’s killing is believed to be connected to his relentless campaign against large-scale mining projects and grave corruption by provincial officials in Palawan.

In his testimony, Regalado did not deny his participation in the crime. He was said to be the Edrad’s main contact. Regalado also named Reyes as mastermind. Despite his confession of his role in the crime, he too was absolved. 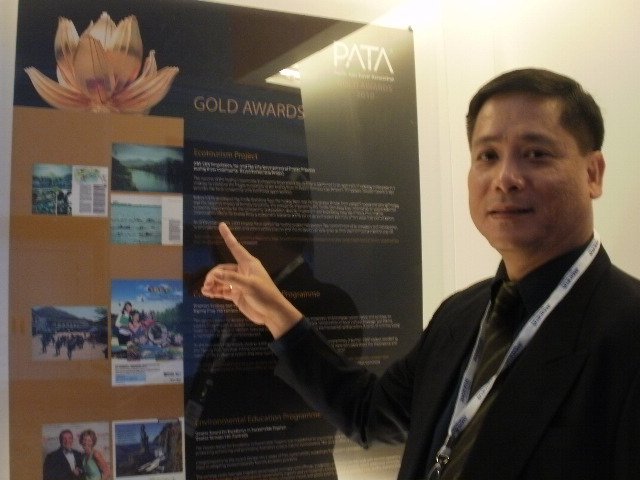 Slain environmentalist and journalist Gerry Ortega was a strong critic of large-scale mining operations in Palawan. He was gunned down in broad daylight on January 24, 2011. The Department of Justice recently laid down a decision absolving the main suspects in the case, including a former governor of Palawan.
(Photos courtesy of Task Force Justice for Dr. Gerry Ortega / bulatlat.com) 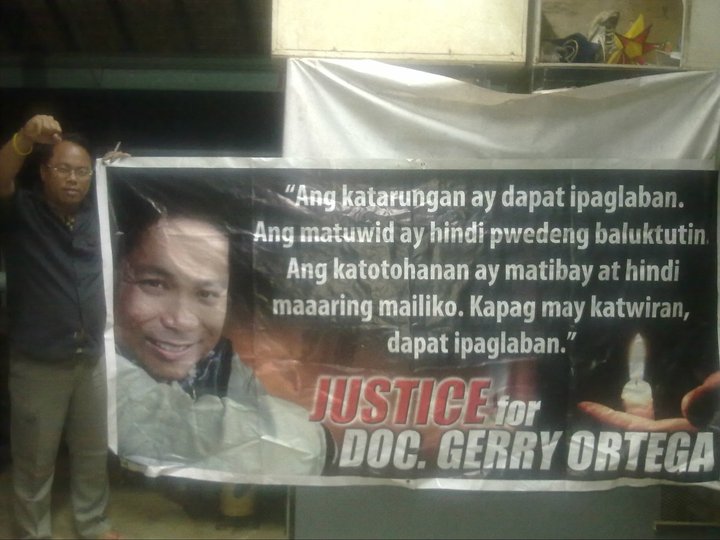 As for Lecias, it was said that two days after Ortega was killed, he became angry at Lecias because he allegedly did not know that the gun he bought from Seratubias was the one used to shoot and kill the doctor.

In Lecias’ initial statements pertaining to the case, he confessed everything he supposedly knew including Regalado’s suspicious phone conversations. According to reports, he made a promise to Ortega’s wife, Patty that he would do everything to give justice to the slain environmentalist. Months later, he said he was abused by members of the National Bureau of Investigation, forced by Mrs. Ortega to testify.

According to Task Force Justice for Dr. Gerry Ortega, the ex-governor should never have been absolved.

Reyes, who said that he was in Switzerland during the time of the killing, called a press conference upon his arrival to deny any participation in the murder and claimed that it was his political opponents who were trying to frame him. His defense rested on impeaching the Edrad’s credibility as a witness and in establishing that he had no motive to eliminate Ortega despite the latter’s attacks on him over the radio.

The Task Force for Ortega said that terrible inconsistencies cropped up in the statements made by the Reyes’ side.

“Reyes claimed he never trusted Edrad in the first place nor hired him as his bodyguard and that the latter merely hanged around his party; but he admitted in reaction to Edrad’ testimony that he made overseas calls to his brother so Edrad could be given financial assistance. Edrad received the money after travelling from Quezon Province to Alabang.”

“Reyes’ publicists have clearly invested a great deal of money in having paid opinion columnists blur the issue with extraneous arguments. These includes insinuations that the interest of Mayor Edward Hagedorn and businessman Jose Alvarez in the case were indicative of conspiracy, that either or both men were the actual masterminds. Yet at the same time, Reyes’ lawyers never offered any new and separate evidence that could back up their insinuation.”

“The other key argument, just because he kept repeating it, was Reyes’ claim that he and Ortega were friends and therefore had no reason to harm him. In the end, the DOJ prosecutors allowed themselves to be influenced by outside pressure, political or otherwise, the case and its merits should be lodged before a judge, and Reyes, former governor of Palawan, should stand trial for the murder of a journalist,” it said.

In a text message to the media, Ortega’s daughter Mika said that they feel “blatantly cheated.” She questioned the decision of the DOJ panel to state that there was lack of evidence, but it absolved the gun owner and the self-confessed middlemen. According to her, the DOJ panel only saw probable cause only in the cases of the accused who testified against ex-governor Reyes, and this by itself was unjust.

Finally, Pamintuan said that the Benigno Aquino government continues to fail its duty to give justice or remedies to victims of extra-judicial killings in the country. She said that the DOJ’s decision is sending a message to perpetrators of extra-judicial killings that those who are moneyed and powerful can get away with murder and escape prosecution. “President Aquino should act on this matter. We demand an impartial re-investigation. We will continue to support the quest for justice for Dr. Ortega and also for the other victims of extrajudicial killings,” she said.