At least five causes of action are being sought by the health workers against the former president and her officials involved in the case.

MANILA – They were arrested early one morning in Morong, Rizal while conducting a health training for community health workers. All 43 of them were taken at gunpoint, incarcerated, blindfolded for days, tortured, and taken one by one at night to be interrogated till daybreak. They were at the mercy of their captors, accompanied by soldiers even when they had to go to the toilet.

But now they are fighting back. Six former political detainees attended the first hearing on the P15-million ($346 thousand) damage suit they filed against former president Gloria Macapagal-Arroyo and top military and police officials who were responsible for their arrest, detention and torture.

The six are among the 43 health workers arrested on Feb. 6, 2010 in Morong, Rizal. Collectively known as the Morong 43, they suffered physical and psychological torture. Most of them were released in December last year. Two are still in jail.

Judge Maria Luisa Quijano-Padilla of the Quezon City Regional Trial Court Branch 22 heard the petition for a writ of preliminary attachment filed by the lawyers of the victims. A writ of preliminary attachment can be issued against the property of a defendant to serve as security for the satisfaction of any judgment that may be recovered herein; and that after due hearing on the principal cause of this action, judgment will be rendered against the defendant.

Lawyer Ephraim Cortez of the National Union of Peoples’ Lawyers (NUPL) submitted the affidavits of the six plaintiffs as evidence. 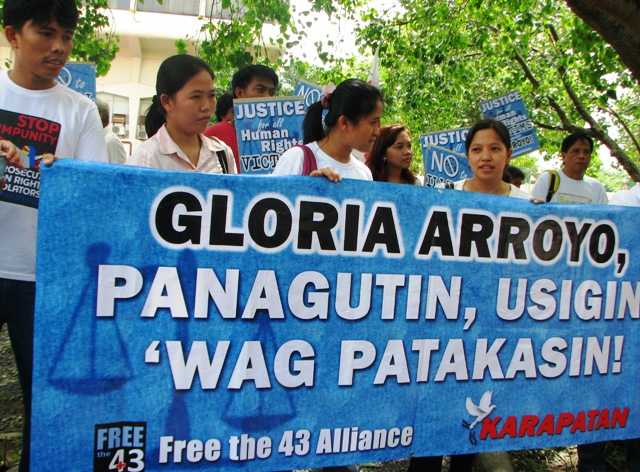 (L-R) Reynaldo Macabenta, Mercy Castro, Teresa Quinawayan and Dr. Merry Mia-Clamor join their supporters in a picket before the start of the first hearing of the case they filed against Arroyo et.al at the Quezon City Regional Trial Court.(Photo by Ronalyn V. Olea / bulatlat.com)

Asked about the grounds for preliminary attachment, Cortez said the defendants might abscond. Padilla said Arroyo is elected congresswoman of Pampanga. Cortez said Arroyo is facing other charges and there is no guarantee that she would not flee even if she is an elected official.

“We have no way of holding them here in the Philippines,” Cortez said.

At least five causes of action are being sought by the health workers against the former president and her officials involved in the case. These include damages for torture, damages for the violation of their constitutional and statutory rights, including their right against arbitrary and illegal detention, right against self-incrimination and right to counsel, divestment of personal belongings, Arroyo’s neglect of duty, and moral damages.

Lawyer Angelito Chua, counsel for the defendants Ibrado and Bangit, filed a manifestation to the court saying that they did not receive summons.

Padilla said the defendants cannot participate at this time.

The petition is deemed submitted for resolution.

Outside the building, other members of the Morong 43, their relatives and supporters held a picket.

Cristina Palabay, convenor of the End Impunity Alliance, network of civil libertarians, human rights defenders, and personalities, expressed support for the members of the Morong 43.

“It has been nearly a year since President Benigno Aquino III assumed office, and not a single perpetrator of human rights violations under the Arroyo regime has been prosecuted and put behind bars. As of May 2011, there have been 50 victims of extrajudicial killings, while there are 336 political prisoners, including the remaining two from among the Morong 43, who are still languishing in jail. It is no wonder that the culture of impunity persists because the rights violations are still being perpetrated, perhaps more brazenly, up to the present,” Palabay said.