A university in Bukidnon continues its campaign to drive away some 800 farmers and their families from their land.

Farmers led by the Buffalo-Tamaraw-Limus Farmers’ Association (BTL) and the BTL Women’s Association continue to fight against the attempts of Central Mindanao University (CMU) in Musuan, Maramag, Bukidnon to evict them from their land. The farmers have put up a protest camp last June 3 in front of the university to denounce its violent tactics. BTL Women’s Association is a part of the 43 peasant women organizations under Amihan Northern Mindanao. 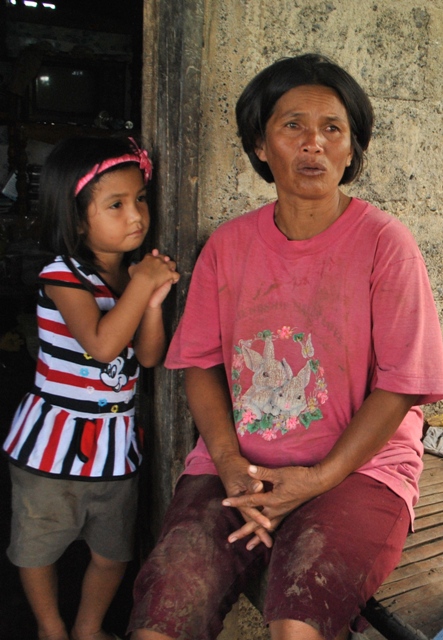 A farmer tearfully narrates how armed guards confiscated her tools on the morning of June 3. Farmers of Buffalo, Tamaraw and Limus in Maramag, Valencia, Bukidnon have been asserting their right to the land since the 1980s. The farmers have collectively owned 400 hectares which they planted with rice. (Photo by INA ALLECO R. SILVERIO / bulatlat.com)

On the morning of June 3, more than 50 heavily armed university guards from the Chevron Security Agency and elements of the paramilitary Civilian Auxiliary Geographical Forces Unit (CAFGU) came with high-powered rifles and hand guns. They fired at the farmers as they worked at the rice fields. They also brought with them two tractors to destroy the farmers farm tools. Many women and children were reportedly traumatized because of the firing.

At the time, the farmers were conducting “Operation Tikad,” it’s what they call their efforts to continue tilling the land while no agreement has been made between them and the university.

A history of land conflict

According to reports from Amihan-Northern Mindanao, the farmers of the towns of Buffalo, Tamaraw and Limus in Maramag, Valencia, Bukidnon have been asserting their right to the land since the 1980s. The farmers have collectively owned 400 hectares which they planted with rice. They are also rightful beneficiaries of the Comprehensive Agrarian Reform Program (CARP) of the Cory Aquino government. In 1987, the BTL applied for coverage under the CARP; in 1991, the Department of Agrarian Reform Adjudication Board (DARAB) issued certificates of land ownership award (CLOA) to the farmers.

In 2001, however, the Supreme Court ruled in favor of the appeal of the CMU Administration to exempt the CMU lands from distribution. It said that it needed the land for “educational and scientific purposes.” 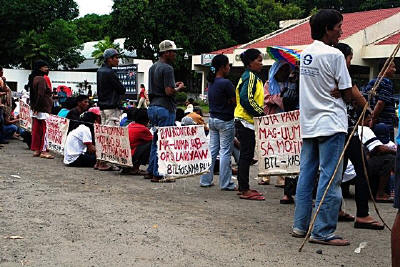 Farmers have put up a protest camp last June 3, 2011 in front of the university to denounce its violent tactics. (Photo by INA ALLECO R. SILVERIO / bulatlat.com)

It has been discovered, however, that the university administration aims to put up new piggeries, poultry houses in the area. Another party is also involved: Davao Ventures Corporation (DAVCO) has announced that it wants to utilize the BTL land area to expand its pineapple and banana plantations. Expansion of corporate plantations inside the university would make more than 800 families search for another area as a source of food and sustenance.

The CMU previously ordered the farmers to vacate following an offer by the provincial government of a relocation in nearby Talakag town. The farmers refused, and has since then been the target of harassment by university guards and the Armed Forces of the Philippines.

In 2001, the BTL, through the help of the Kilusang Magbubukid ng Pilipinas (KMP), held a dialogue with the CMU administration. As a result, a memorandum of agreement (MOA) was signed by the two parties. The farmers agreed to pay P4,000 (US$78.446 at the 2001 exchange rate of $1=P50.99) per hectare per year as rent to CMU. The MOA was effective until March 2007, and the local government agreed to find a suitable relocation site for the farmers.

When the MOA expired, there was still no relocation site for the farmers. Since then, CMU security guards, goons and CAFGU have been roaming the area, supposedly guarding it against the farmers.

The most recent attack happened on June 3. Previously, on May 23, university guards went to the farm areas and accosted the residents. The armed guards took the farmers’ tools and implements and threatened them at gunpoint. Some of the guards also fired their guns in the air to further frighten the farmers. They also blocked the irrigation canals with the help of the military.

On May 27, CMU president Dr. Ma. Luisa Soliven said in a radio interview that the CMU board of regents will give the farmers three more years to stay and that farmers should pay one peso per hectare for every year of lease. She said that the end of the three years, the farmers should leave, but this time there would be no relocation site waiting for them.

BTL Women’s Association chairwoman Felomina Santillan appealed to the university to allow them to continue farming. “Our families will starve if we don’t. For humanitarian reasons, we ask the CMU administration to allow us to sow seeds in our rice fields while waiting for the final agreement.”

Santillan said that there was no truth to the university ‘s claims that it wants to use the land for educational purposes. “We are being driven away just so DAVCO can expand its banana and pineapple plantations! There’s nothing scientific or educational about that. That’s business,” she said.

Santillan said that the CMU administration’s move to attack them was calculated. “It’s the planting season. If we don’t begin cultivation and planting, we will not have food for the next months and we will be forced to leave the land. Their attacks are deliberately timed,” she said.

Aside from the security guards and the CAFGUs, the farmers are also worried over the presence of a certain Antonio Pamisa. They said that Pamisa is a man notorious for killing Lumads. They said that the man was now employed by the CMU to harass and intimidate the farmers.

The farmers , however, are still determined to stay.

“We have no choice but to assert our right to the land. We need to begin planting or we will starve. Our land is our life. Take it away from us, and you take our life too,” she said.

The famers are not without support in their fight for the land. The Sisters’ Association in Mindanao have denounced the CMU for harassing the farmers.

“We support the farmers in their claim over the 400-hectare property. It should be given to them. The land is their life. We demand for a speedy investigation relating to these incidents of human rights violations,” they said.

The nuns called on the CMU Board of Regents to “reexamine their conscience and uphold the principle of ‘land to the tiller.”

“The CMU regents should know that education must serve the interests of the poor and the marginalized, especially farmers and indigenous peoples. The need for a redistribution of wealth is echoed in the words of Pope Pius XI as affirmed in the Compendium of the Social Doctrine of the Church: “The distribution of created goods, which, as every discerning person knows, is laboring today under the gravest evils due to the huge disparity between the few exceedingly rich and the numerous propertyless, must be effectively called back to and brought into conformity with the norms of the common good, that is, social justice,” they said.