“The RH bill has many positive provisions that may be put to waste if the population control menace continues to overshadow the bill’s essence. As we work to strengthen the public and fellow legislators’ appreciation of such good provisions, we shall nonetheless refuse to make the RH bill a platform for population control.

MANILA – Jessica Rufin, 37, is pregnant with her fifth child. Her husband is a plumber who earns P6,200 ($144.18) a month. Rufin is a housewife. With her husband’s meager income, they try to send their children to school, feed them, and clothe them. And because she is pregnant, she also has to include in her budget her vitamins and other needs for her pregnancy.

Mothers who belong to the marginalized sectors like Rufin now speak about the importance of pro-poor, pro-women, pro-health Reproductive Health (RH) bill. “Being pregnant, we have to undergo pre-natal check-ups and lab tests. Lab tests are not free. There are no free lab tests in our barangay (village) health center, we have to go to a private clinic or hospital,” Rufin said. With the meager income of her husband, Rufin said she cannot afford to avail of the expensive lab tests. “We really need a comprehensive Reproductive Health law that will provide such services.”

In the light of the rowdy debate in Congress, the Gabriela Women’s Party (GWP), together with the progressive women’s organization Gabriela, stressed that the focus of the comprehensive RH bill should not be about contraceptives and population control, but about comprehensive health care program for the marginalized women. 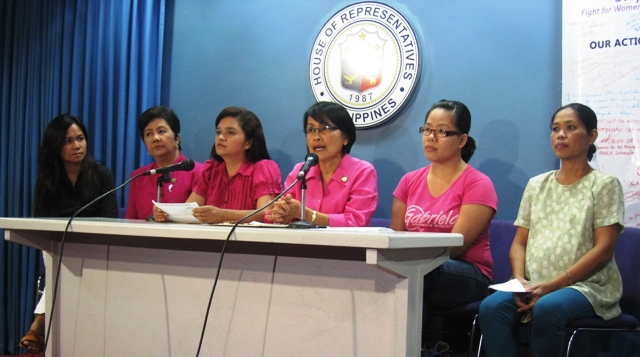 Alarmed with the direction of the ongoing debate inside and outside the plenary hall of Congress, Gabriela sent their letter of concern to legislators. While they appreciate the continuing efforts of the legislators to push for the RH Bill, the letter read: “We would like, however, to express our concern at how the ongoing debates inside and outside of Congress on the RH bill appears to highlight the crafting of a national policy with a population control agenda and overshadows the bill’s positive provisions, specifically its commitment to ensure as a matter of state policy and responsibility women’s access to healthcare and women’s right to informed choice.” 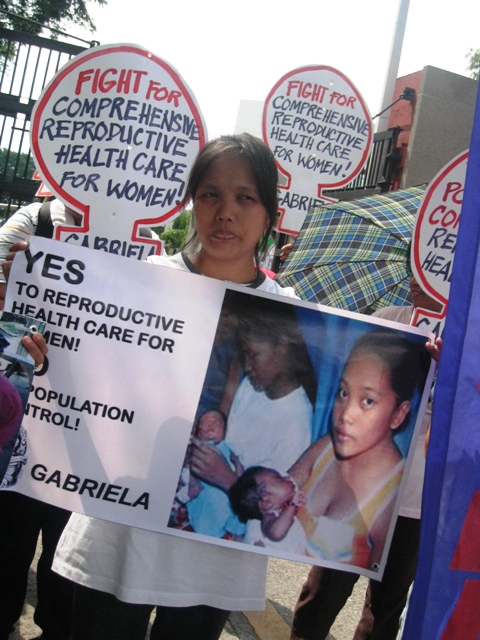 GWP and Gabriela stand firm that population growth
is “never the culprit for our nation’s poverty and thus population control is never a solution.”

It is the responsibility of the government to provide health care services to the people, the women’s group said. Thus, the RH bill should be seen as a bill that responds to the needs of women in the marginalized sector and not a bill that controls the population.

“Reproductive healthcare services must not only be made available, they must also be accessible, especially to women from the poorest communities,” GWP Rep. Luzviminda Ilagan said.

In a press conference May 31, two mothers spoke about the lack of basic health care service in their community. Rufin and Kristin Joyce Haban, mothers from San Roque in the village of Pag-asa in Quezon City and Novaliches, share the same sentiment. “We don’t need population control, we need health care services,” Haban, 28 and a mother of three, said. 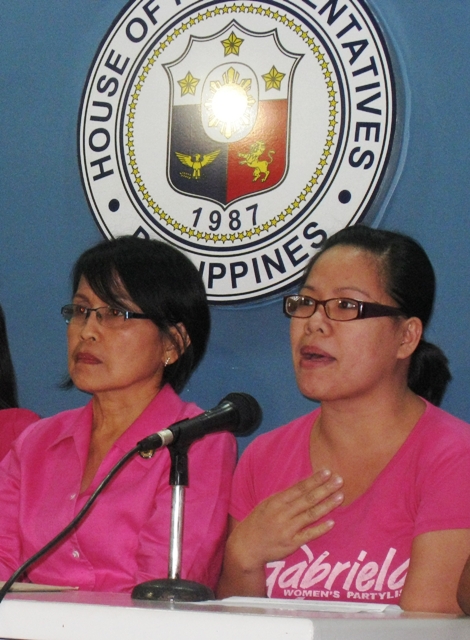 Population control is not the answer to poverty — KJ Haban (Photo by Anne Marxze D.Umil / bulatlat.com)

“Let us not mislead the issue. It is the women’s right to have a better health care that she needs especially when pregnant,” Dr. Geneve Rivera-Reyes, secretary general of the Health Alliance for Democracy (Head), said.

Rufin said that the poor should not be blamed for the growth of the population which in turned is blamed for why there is poverty. “We don’t need population control. The government must do something to eradicate poverty,” said Rufin.

Haban said that the crisis in the country cannot be solved by population control.

“We are alarmed that the debates harped on population control as a solution to poverty. Population control, or forcing us to limit the frequency of pregnancies without regard for our health, will not ease us out of poverty. We are poor because we cannot find jobs. Or even if we do have jobs our wages are not enough to meet our family’s basic needs for food, utilities, shelter, health care and even our children’s education. Population control is not a solution because even if we only have a few children, we would still be poor as long as there are no government policies and programs that squarely address poverty,” Haban said. 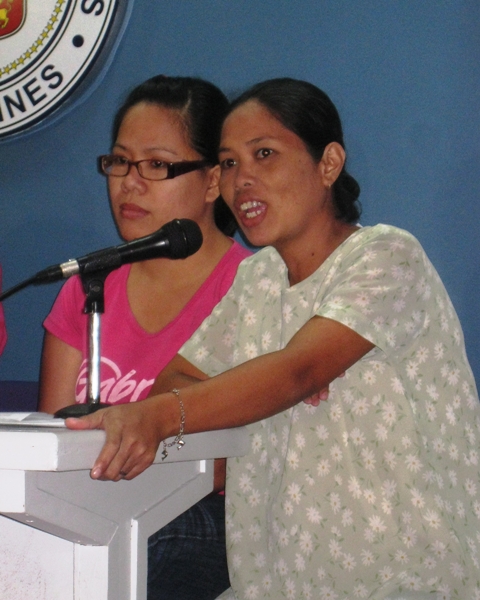 “Our people are suffering from poverty; they are not the ones causing it. To address poverty is to address landlessness, lack of industries, low wages, high prices, poor services. Our population is our nation’s resources. Stop blaming the poor and the women,” GWP urged in a position letter.

GWP data show that out of 19.4 million Filipino women of childbearing age in 2006, an estimated 1.73 million women did not have access to antenatal care from skilled birth attendants.